Hey guys Loman here and I wanted to present to you an amazing ladder deck on my second account, the Freezing Graveyard Deck!

I posted a VERY similar deck prior to this but I made a few changes to my deck and it works wonders. While my first deck brought me to 4000 after unlocking the Electro Wizard and a few upgrades I have arrived at the ultimate form of this deck.

It helped me break 4500 trophies this season with over 20 days left and I think I’m well on my way to grind my second account to 5000 trophies as well.

Now enough talking and onto the actual deck! 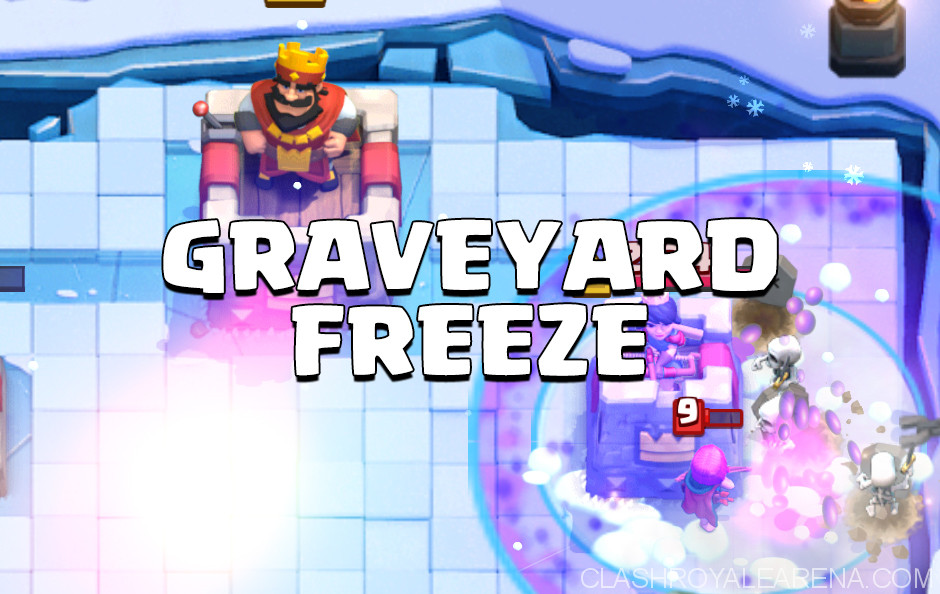 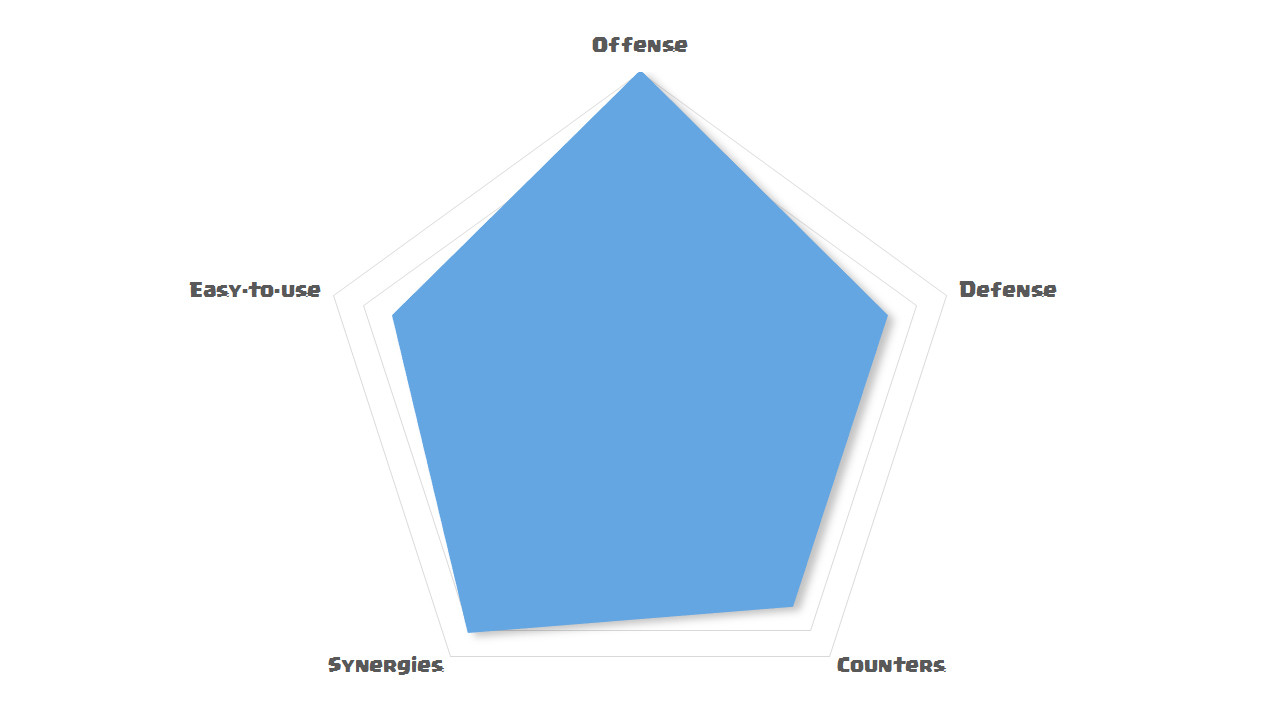 Graveyard- Main win condition of this deck. Level doesn’t matter a whole lot but ideally you want it to be the following levels at the following trophy ranges. (Opinion based)

Now post buff a lot of cycle decks carry Skeletons so it’s best to pay attention to this because in this deck there’s no positive way of getting rid of the Skeletons, Ice Golem has become very rare and Ice Wizard was never in the meta to begin with post P.E.K.K.A Double Prince times.

Learn how to place the Graveyard in different circumstances depending on what your opponent uses to counter your cards.

Knight- Main tank for your deck and one of your key defensive units. Counters Graveyard reasonably well, great defense vs E-barbs and other back line troops like a Musketeer or Wizard in the back.

It’s got pretty significant DPS and being a common card you can over level it, the Knight being my only level 12 common card in my second account.

Executioner- This card is very important!

Almost never start off with an Executioner because it’s your only counter to Lava Balloon or Giant Balloon. I’ve had games where I started off with an Executioner and my opponent simply put a Giant Balloon on opposite lane. Despite winning that game I was kicking myself for the remainder of that game. (This was me trying a different Battle Ram Graveyard deck but principle is the same) 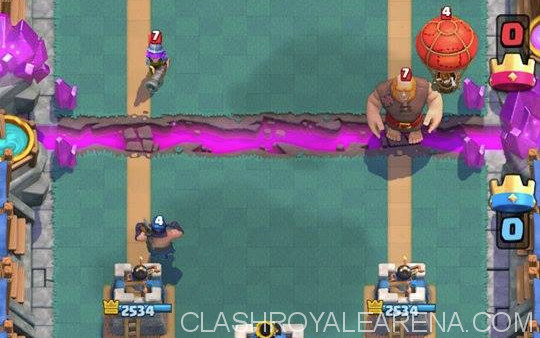 E-Wiz- I can already hear the groans that this isn’t F2P but around 4k on ladder you are more than likely to have unlocked most if not all Legendaries. That and if you get gold from challenges and stuff you can easily upgrade E-Wiz to level 2. Which is my E-Wiz’s level.

It can get 1 shot by most Fireballs but that side it’s no too level depended. I included this card in this deck to combat cards like Inferno Dragon or Sparky which this deck struggled against before. Also it’s decent vs Goblin Gang and swarms cards like Skeleton Army or Minions.

Tornado- It should be illegal to run a deck with Executioner but no Tornado. Tornado is just amazing when combined with the Executioner at beating beatdown decks.

This deck lacks DPS so you need to kill support asap, which can be done rather easily when using Executioner and Tornado. That being said you need to time the Tornado properly and typically pull troops away from the towers but at the same time try to keep them within your troops range. 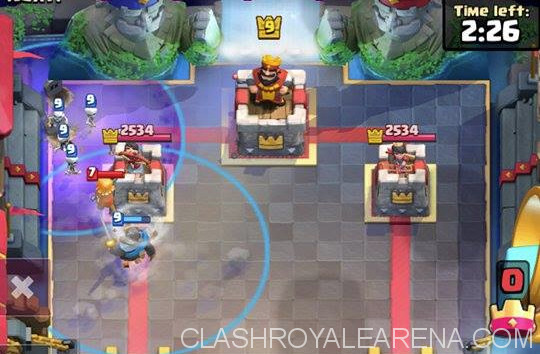 As you can see here, I was able to drag the Valkyrie away from the Graveyard and onto the Knight. This is a better option than say Freezing in this situation because the the Valk will not be tanking Skeletons hits and they will directly go onto Tower.

Further along the way you can make more advanced plays, Ie- If they counter Executioner with smarmy and gob Gang on Graveyard? Tornado so Skeletons die and Executioner kills Gob Gang.

Skeletons- Mainly a cycle unit but they are a decent tank for your Graveyard. You can use these 1 Elixir Skeletons to rush an opponent who pumps up etc.

This also leaves you with a LOT more Elixir than a typical push to Freeze/Arrows/ Tornado.

Freeze- This can be changed to Poison but free works far better especially because it’s the least level dependent card in this game. It also changes this deck entirely from other Graveyard decks which typically whittle your Tower away, this deck aims to make that one push where you catch your opponent off guard and take a Tower. Freeze is also very viable on defense 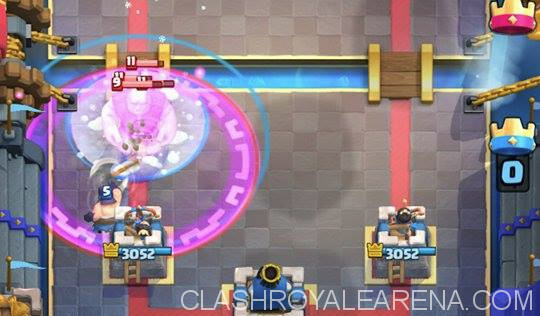 Yes these are level 11 3 Muskets… pains of ladder.

This card can come in clutch in many instances.

Arrows- The reason this works better than Log in this deck is because it’s got more *range* can hit further back and also it can handle Minions and Minion Horde, also is great vs a Lava Hound and Goblin Barrel.

One flaw with this deck is cycling. You can end up with bad starting hands.

You can do one of 2 things in this situation. Either Graveyard and draw a reaction but don’t overcommit, try and figure out your opponents counters early on and figure out what sort of match-up you have and how you will go about facing them.

Try and avoid a starting move like Executioner in the back because that is inviting trouble from the other lane, in which case more times than not it’s best to ignore it and go all in if you know you will lose the Tower.

Now knowing your opponents deck you want to anticipate the counters. You probably won’t get it all the first time but as you realize your opponents cycle you can throw predictive Tornados, Arrows etc. 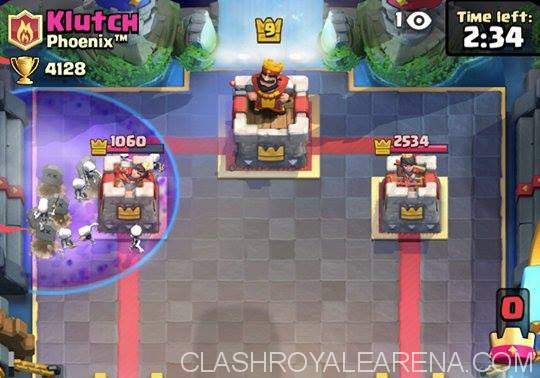 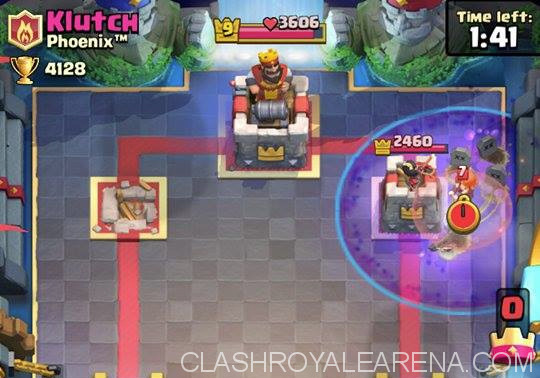 Vs Valk you want it~ 1 tile to the center. This  minimizes King’s Tower activation risk and also if you’re lucky with rng skills will spawn on opposite sight do hit the Tower.

Keep in mind you can also play it all the way in the back and whatnot, honestly I switch things up from time to time but you need to really pay attention to these 2 basic placements.

By now you either have chipped out a majority of the Tower or taken one and are defending. This deck is mainly a 1 crown deck. If both players  are 1 Tower down, typically you will be at a disadvantage compared to your opponent.

With an Executioner and Knight and E-Wiz there’s really not much a deck can do, just try and avoid giving opponent value. Or use the Knight to protect your E-Wizard etc. Utilize Tornado while Executioner shreds and you should be good.

I will list match-ups you will face on ladder from most difficult to easiest.

3 Musketeers- Unless you catch opponent off guard or they use a more expensive 3 Musketeer deck like Golem/P.E.K.K.A 3 Musketeer, this deck doesn’t fare well vs 3 Musketeer cycle, Ram or not. Not having a Fireball and having to Freeze on defense lead to negative Elixir trades but ideally you want to Graveyard and kill pump and get ahead FAST then defend for your dear life. Your defense has to be on point with your Tornados and keep you Executioner alive as long as you can by tanking for him with maybe a Knight etc.

Mortar- You need to save your Executioner vs this and don’t give value by letting them Rocket exe+ Tower. You want your Knight to take and Executioner to snipe the Mortar and also use Tornado. You have to be very careful and this deck cycles quite a bit faster than you do, exe+ Tornado should be saved to kill motar+ distractions, ideally with a Knight tanking for the Executioner.

Royal Giant- You lady DPS, so skills and E-Wiz should be saved for this card. Getting Skeletons logged or zapped is good because that leaves it open for you to Freeze on your Graveyard countepush. Executioner and Tornado also work. When you are a Tower down, feel free to Tornado and Freeze Royal Giant + support away for your troops to snipe on even their side of the map. ,

Golem / Lavahound- Avoid giving value lightnings and use Knight as a Lightning rod. Tornado should be utilised as well, feel free to Freeze everything together if you don’t think you can kill them all in time. If opponent pump rush them with Graveyard Freeze on pump. Or Arrows, whichever makes most sense to use. 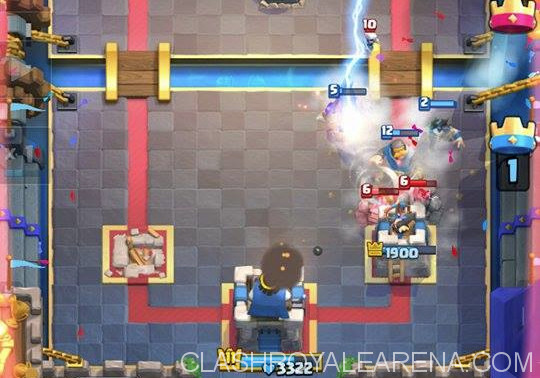 Knight has been promoted to the rank of Lightning rod.

Also vs Lava hound you have Arrows for defense as well. You have a wide array of very defensive cards, just use them wisely and lean where to place what as well.

Other Graveyard Decks- Below mid – high 5k. There’s not much Graveyard on ladder but you typically want Knight for Graveyard and Executioner or E-Wiz on support. This deck is weaker than most Graveyard decks because other gravy decks typically run Poison not Freeze which hard counters your Graveyard. Here is where Graveyard level matters again. Just play it smart and don’t play into counters. Also… If you see a Bowler know you are in for a tough match because Bowler is really strong vs this deck but thankfully this deck will be run on ladder not challenges so you will see a LOT less amounts of Graveyard and Bowler yard in general unless you are super high on ladder.

Hog Rider- By far one of the easiest match-ups. Log bait or regular Hog. Tornado to activate king and then repeatedly Tornado the Hog. This deck cycles somewhat fast but not as quick as say the 2.6 but you have E-Wiz and Tornado. Also note that you want to use the E-Wiz away from Tower so Fireball cannot be used on i to get Tower damage and leave E-Wiz with 1 HP. With Log bait as well you want to save Arrows for the Goblin Gang because other than that there isn’t really that good of a counter. Especially if a tank is there, in which case, an E-Wiz for an example would work terribly vs the Goblins and they will get a LOT of damage on your Tower.

Miner- Same principle, activate king and you barely have to worry about it because the Miner melts fast. You can predict with a Knight or skulls as well to mitigate damage.

Give this deck a try, it takes a bit of time to learn to play and is most likely not everyones cup of tea but it’s brought me a lot of success so yeah. Wish you all the best and cheers. Lolman out.