Hey guys, what’s up. It’s ya boi, SCorpSCilla, back at it again with my second ever deck on CRA, the Freezing Furnace Hog Rider for Arena 5 and above.

This deck is a remake of the Elite Furnace Cycle Deck, with a little twist added to it. 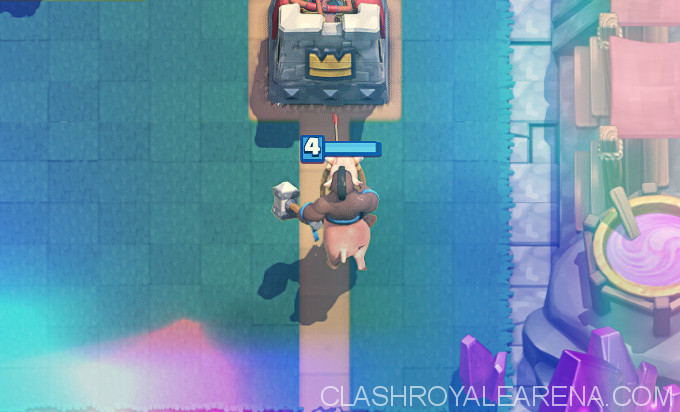 Hog Rider – The main tower basher of this deck. Always keep a Zap ready with this badboy for that Skeleton Army. Paired with the Knight tanking for him, he is bound to do some damage. Otherwise, you can also pair him with the Knight to do the pig push!


Furnace – Ah, I always wonder how something as marvelous as this can spit out Firey creatures waiting for a kamikaze attack. Anyway, this spawner will defend against Minion Horde, if you don’t have Fire Spirits, Archers, or Zap, in your rotation yet. When pushing with Hog Rider, make sure that you time it so that the Fire Spirits trail along as well, clearing any air troops. This card will also draw in Hog Riders, Balloons, and Giants. If the situation requires for it, you can put it in a position where the support units would attack, but I mean why would you when you can build up a push and use the Furnace to support the Elite Barbs. This is a replacement if you don’t have the Fire Spirits.

Take a look at this in-depth guide to read more about the Furnace.

Freeze – Devastating when used correctly. Place this card when your opponent actually counters the Hog (Skeleton Army/Goblins can be dealt with Zap). Then your opponent will go berserk and send everything to stop that Knight+Hog Rider Combo. This forces your opponent to use his cards on low elixir and might reveal a hidden card. Also, if you are desperate, you can Freeze your opponents push to buy some valuable time for your cards to shut it down.

Archers – Very versatile card. Defends against everything from Witches, to Minion hordes, to even that charging Prince, give the protection. They cannot die to zap or log, unless they are low leveled. But even if they are, you can still use them a lot. Push them behind the knight and you have a very cheap push. You can use them to kill support units, aided with the Knight tanking for them, turning into a nice counter push.

Knight – The main tank of this deck. Very beefy for a three Elixir card. Can take on the Prince aided with the archers and will also tank for the Hog Rider. You might even be able to sneak in a few hits onto the tower. On Giant pushes, he is the one used to kill the Giant. You can replace him Valkyrie for the 360 splash benefit, or the Mini P.E.K.K.A. with the bigger damage but less health.

Minions – These three flying demons will shred anything down below such as Knights, Mini P.E.K.K.As, Valkyries, and even Musketeers when placed right on top of it. Not much to say about this. Just remember that they are subject to being countered hard.

Fire Spirits – Fire Spirits can solo regular Barbs if placed correctly, same with the Mini P.E.K.K.A, Goblin Barrel, Minion Horde, and can help take out the Elite Barbarians. I advise that you don’t panic during a push and save them for something useful. Ex. Don’t try to use them on the musketeer that’s totally freaking you out when he has the minion horde in rotation.

Try to defend first with Archers at the back and wait for his attack.

Well I hope you guys have enjoyed this deck.

If you are F2P, low level player, this deck will get you up out Spell Valley in no time.

If you love this deck, ask for more in the comments.

This is SCorpSCilla, and be sure to type in #AsianClan if you want more from me. See ya guys later.