Nice to see ya guys, Cosmincreato here once again with a powerful 3.6 Balloon Deck running the 2 Witches which caught my attention, tested on 2v2,on ladder and I’m pretty proud of the results. 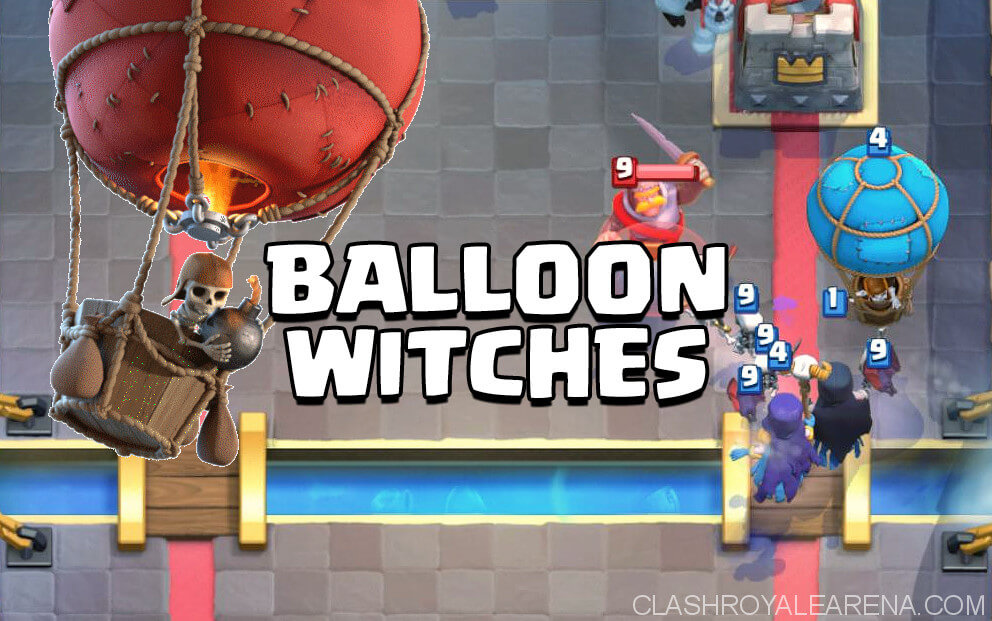 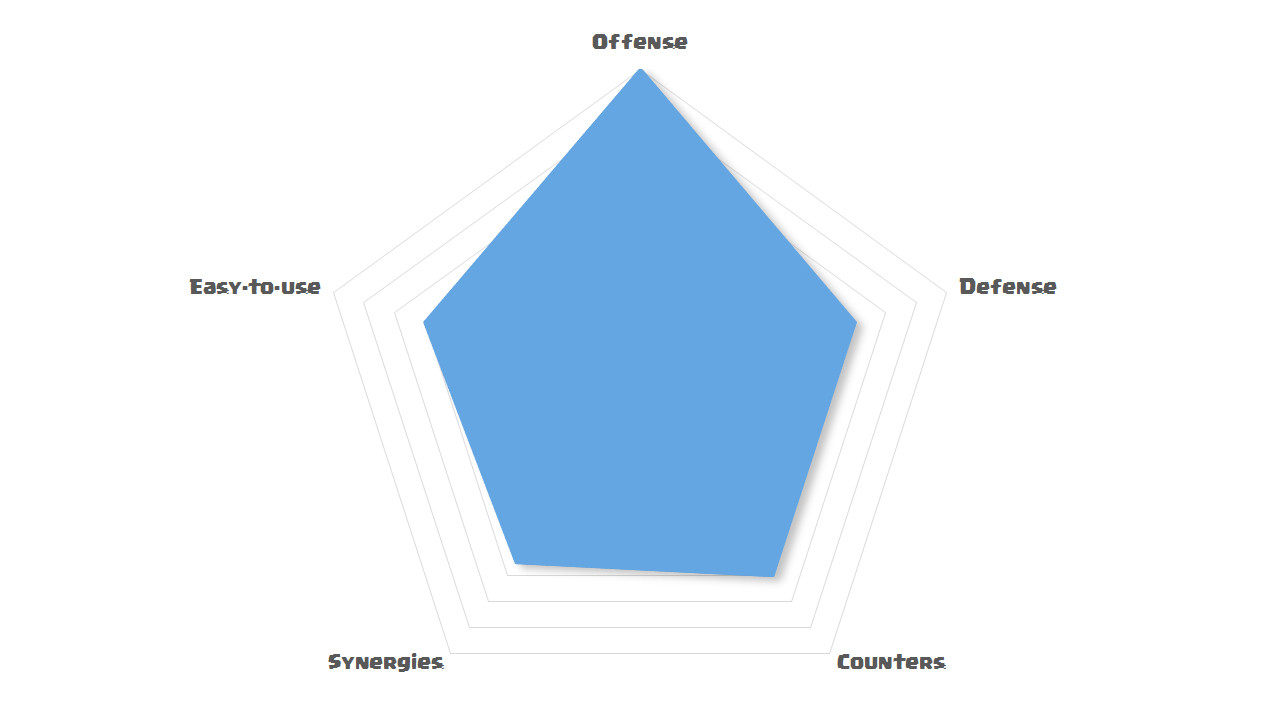 Balloon: Your win condition. Keep it safe until the mid-to-late game.

Never send it alone until you are 100% sure he has NO counter to it and you need to get that tower down really fast.

There is really not a lot to say about it since its only role is to destroy the enemy towers, and the main push has been said above.

Witch: Main support of your deck and a great defensive tool for its Splash Ability and the Skeletons used for distraction and chip damage.

The Witch was a pretty powerful card a long time ago, until cards like Bowler and Executioner have faded her, but I think she is, well I cannot say underrated, but not used that much anymore, when there are lots of Decks that need the Witch to explore.

Anyway, back to her role in the deck, she is a  great counter against charge/dash effect cards due to her Skeletons while Inferno Tower is doing what it is supposed to do.

Night Witch: She is totally incredibile. Main defensive troop in the Deck.

I said earlier that this deck may not be that good against Splash Troops, but she is pretty decent against Ground-Only Splash Troops since her Bats will kill the troop.

Can be used on attack as well since the tower will be most likely done if they can’t kill the Balloon and the NW in time.

Knight: The Knight, the ol’ good card that everyone used to play in Arena 1 is actually one of the greatest cards in the entire game, its stats are totally crazy for a 3 Elixir-cost card, attacking really fast and being a great Mini-Tank.

If I were you, I’d check out this great in-depth guide about the Knight: click!

Fireball: I’ve always seen the Fireball as a Meta Card because you can totally destroy pushes when zapping the Glass Cannons after the Fireball to destroy them (if they’re not destroyed by an overleveled Fireball), leaving the Tank alone. From there you can use the Inferno Tower to stop their whole attack.

Inferno Tower: Tank destroyer. Just be sure to not let troops attack it, you’ve got Ice Spirit and Knight for distraction.

Also, while troops are frozen by the Spirit, Inferno will deal lots of damage, maybe even shutting the Tank down, so that’s a pretty nice combo.

Ice Spirit: This little dude is insanely good for 1 Elixir. He freezes and destroys Minion Hordes with the help from Arena Tower. He also retargets troops and resets their abilities.

He’s incredibly versatile, just like the other 1 Elixir card.

So basically, this deck consists in a powerful defense.

Inferno Tower is for Tanks and Mini-Tanks. Ice Spirit helps your troops to deal lots of damage by freezing the enemy push.

Knight is a perfect card for distraction, which can also turn into a Mini-Tank for the Balloon and the two Witches who finish stabilizing your defense.

After that, you can start your main push with the Knight as a front line, the Balloon behind him and the two Witches as the supports.

The shortest cycle in your deck is 10 Elixir: Ice Spirit, Zap, Knight and Fireball/NW.

Defend, defend, defend, do not show your Balloon yet, let your opponent play his anti-Air Cards in his pushes without giving him any sign that you play a Balloon deck.

You can attack once in a while in the Early Game, but don’t force yourself too much, do small attacks with Knight, Witch(es) and Ice Spirit to see how he responds, because you won’t have all the time to analyze his defensive moves and change your counters later on.

Don’t need to stress about the Positive Elixir Trades by now since you’ll mainly defend, but at least you gotta try to make some.


Try to deal damage to Pumps whenever you can, Fireball works but don’t forget about your opponent’s Glass Cannons and when he will play ’em.

Keep on defending, now you will mainly know what’s gonna be your opponent’s next move and how to counter it.

You may now know his cards and you can start more powerful pushes.

Always start your first Balloon push right after your opponent plays his main Aerial Defense (e.g. Minions, Executioner, Mega Minion etc.) He will be forced to cycle, not too easy for all the decks.

Now you’ve got enough Elixir to build fast, powerful pushes at 10 Elixir.Knight in the front, Balloon behind him and the Witch behind the Balloon, having Ice Spirit, Zap, NW or Fireball ready for what you know he’ll play. Mega Minion?Bring the NW.Minion Horde? Zap+Ice Spirit, if Ice Spirit won’t hit them all Witch will clear it up, and so on. Beside that, you’ll have enough time to respond since the Knight is tanking.

In a whole, defend, start understanding your opponent’s deck, wait for him to use his aerial defense, then start attacking.

Trifecta: Trifecta isn’t seen that much anymore, but I’ll still talk about it.

Its defense against Air is kinda crappy and you can counter their attacks with Knight Tanking and Inferno killing the Hog.

Hog Cycle: NW as main defense against Hog. Have a Knight in the front as well so Ice Spirit can freeze it. From there on, start a counterpush.

Lavaloon: The problem isn’t countering the Lavaloon itself, but attacking while their deck is full of Air Troops.

You’re still favorite in this matchup since your deck is made to stop Air.

Golem NW: The NW is kinda annoying since she won’t die to Fireball, but you can do it.

Once again, Knight to distract, eventually freeze ’em all and Fireball them all together. Let the Inferno kill the Golem.

Vietnam’s Bridge Spam: Their Poison is gonna be powerful against your NW. Expect their Poison and protect your NW.

Their main defense against Air are NW’s Bats and the Inferno Dragon. You should concentrate into killing the Inferno while the Knight takes Bats’ hits.

A fast Fireball+Zap to kill their Musks is also really great. Don’t use your Fireballs on anything else or you may be surprised with 3M spawned in front of your tower.

Log-Bait: Zap, Witch, Fireball and most of the time NW and Knight.You can do it.

Siege: Keep the Knight as a distraction.Try to attack Mortars and X-Bows with the NW and eventually finish them with a Fireball.

That’s all for today guys!I wanna hear your opinions! What do you think about this deck and how are you doing with it? 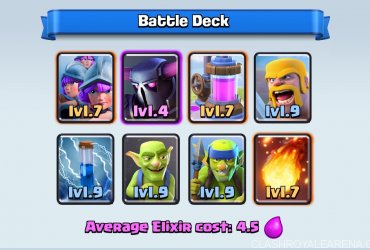 Hey friends, its ya boy M4SON back with another deck. So after the update and playing in some random tournaments I got sick and tired of playing against Bowler Giant … 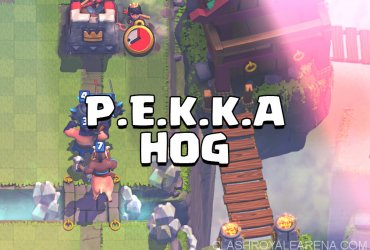 Hi guys it’s RADIOACTIVE with my second deck here on Clash Royale Arena, a PEKKA Hog Lightning for Arenas 8+. Yeah there are like hundreds of different variations of PHL …