I’m dankmelk (IGN: DarkMilk) and I am a Mortar enthusiast but I also enjoy playing beatdown decks, which I will be showing you today.

This Executioner Bowler Beatdown Deck is almost completely unstoppable, 12-0-1 for me right now.

The deck is a strong Tournament and Ladder deck, no matter what level your Executioner is.

The Executioner is similar to the Mortar except much stronger. Combined with the Bowler, they are unstoppable.

The deck is sort of expensive but there is a work around, and I haven’t had any elixir problems so far. Note: I am playing at about 3800 trophies. 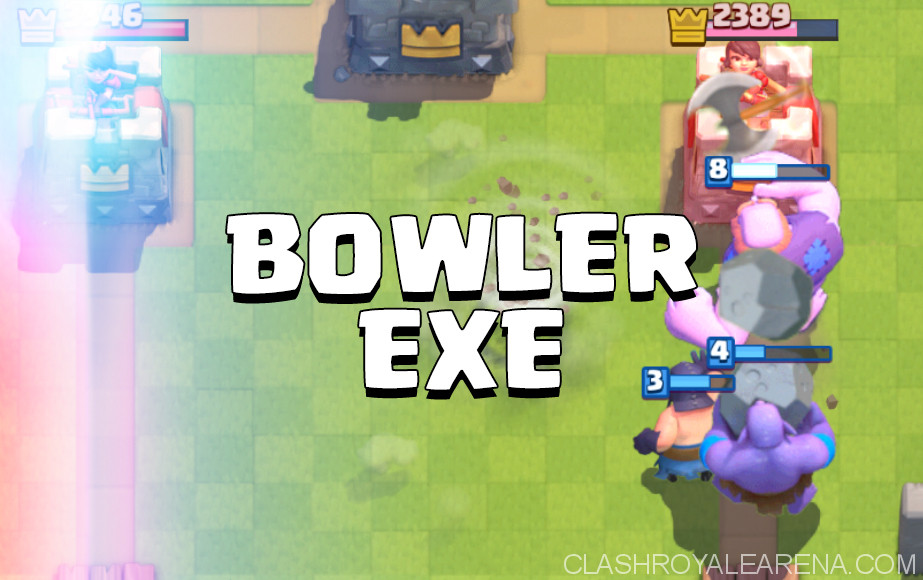 The Deck (levels in parenthesis)

Giant (7): The Giant is your main tank in the deck, bulky and strong, the Giant can protect your supporting troops with no problems.

Since the deck has no Zap, Inferno Dragons and towers can counter your Giant and melt it, but if you have a few support troops stacked up, the opponent won’t have enough time to take it out.

Can be replaced with Ice Golem or Knight if preferred.

Executioner (3): In my opinion, the Executioner is one of the best cards in the game atm.

It is extremely over-powered because it has a small stun, can hit air and ground, has lots of range, has splash damage and cannot be Lightninged.

The Executioner is a great defensive troop that has lots of offensive capabilities.

I normally use the Executioner for defense and then place a Giant and Archers in front of it.

The Executioner can take out a Minion Horde, a Skeleton Army, Barbarians, Tombstone, Inferno Towers, and many other defenses. This is what makes this deck strong, if it is combined with Bowler.

Bowler (4): The Bowler is also very strong at the moment because it can cause lots of damage to hordes, has great knockback, and also has great defensive and offensive capabilities.

Use the Bowler as a defense and then transfer it over to offense, similar to Executioner.

During double elixir time or when you have several Collectors down, you can place both the Executioner and the Bowler together to cause mass damage.

Archers (11): I would say the Archers are one of the most useful troops in the game at this time.

They can take out Minions, Skeleton Army, Barbarians, support troops, etc with just a few shots. They are also an effective counter to the Graveyard.

Unlike Goblins and Minions, Archers cannot be Logged, arrowed, or Zapped.

While being a great defensive troop, the Archers can be placed behind the Giant along with most of the other cards in this deck.

Splitting Archers can be used as a kiting tactic or when you have ten elixir.

Mega Minion (7): The Mega Minion is one of the only troops of its kind.

It is the air P.E.K.K.A that causes great damage and cannot be ignored.

While causing mass damage, the MM serves as a great counter to Musketeer, Ice Wizard, Princess, Hog, Valkyrie, and most all troops because it can take them out in just a few shots, even with the recent balance changes.

Playing the Mega Minion against hordes of troops is not recommended because it will likely be obliterated. No recommended replacements.

With the Elixir Collector, you basically want to stack up a few during normal Elixir time and as soon as it hits double Elixir time you can rush your opponent with a huge push.

Arrows (9): With spell bait, Goblins, and Minions becoming more popular I would suggest using Arrows instead of Zap since it can take out opponents troops that are a few levels higher. It also can hit air and kill Lava pups, giving you a big advantage over Lava Hound decks.

Could be replaced with other spells but it is not recommended.

Tornado (3): I think the Tornado is easily the most exciting card in the deck because of how many interesting uses it has.

A couple of them are: pulling a Miner/Hog/Elite Barbarians into the King’s Tower and activating it or you can clump troops together then completely make them disappear with the Executioner and Bowler because they cause great splash damage.

When you have a large Bowler, Executioner, Giant push coming in and you know the opponent will play Barbarians or several small troops you can tornado the troops right into the tower. This allows the Bowler and Executioner to go to work against the troops and hit the tower at the same time.

An alternative to tornado is Zap or Log if you just hate the Tornado.

Normal Play: In normal elixir time, I try to defend my opponents pushes as much as I can.

Fast paced decks are harder to defend against because this deck is a little on the expensive side of decks.

When I play against an opponent who uses decks that include a tank with multiple supporting troops, I can defend really well because I have a lot of splash damage troops like Bowler and Executioner which can easily take care of an opponents deck.

When I have full elixir I try to place an Elixir Collector and stack them up because they provide a lot of support.

If I defend my opponent in normal elixir time I sometimes place a Giant down in front of my surviving support troops and get a small push going.

Double Elixir Time: As soon as I hit about one minute and I have a few Collectors down, I place a Giant, Bowler, or Executioner in the back on the side that I have most damage or the side that my opponent is attacking.

Once I do this I try to stack up as many troops right behind the Giant as I can. With a Giant, Executioner, and a Bowler down, it is very hard to counter.

I would say the strongest counter to Executioner and Bowler would probably be the Valkyrie because for some reason the knockback on the Bowler does not work when the Valkyrie is smashed between the two troops.

Long story short, just stack as many troops behind the Giant to overthrow your opponent, similar to most beatdown decks.

Defense: Depending on what your opponent plays, you can play a cheaper defense such as Archers, Mega Minion, or you can defend a little more expensively like Bowler, Archers.

Defending faster paced decks is the hardest deck to play against because they are so much faster then you. To defend against them you want to try to get the most out of every troop you place.

For example, if your opponent places a Miner with a Minion Horde or Goblins, you can defend with a execution right behind the Miner so it can hit the extra support troops as well.

When I play against an opponent who uses decks that include a tank with multiple supporting troops, I can defend really well because I have a lot of splash damage troops like Bowler and Executioner which can easily take care of an opponents deck.

Hog decks are the easiest to play against in my opinion because you can defend really cheap and can completely overwhelm them with big pushes, usually resulting in a three crown.

This deck has worked great for me in challenges as well as in ladder play around 3800 and I hope it works out for you.

Some things to remember that I bet you’ve heard a million times, never overcommit, watch your elixir, stay positive and never give up! DarkMilk out!