This Arena 6-9 Mortar deck is designed to give the user a snowballing, tempoed win over the opponent while sustaining minimum damage to their own towers. It is especially good at neutralizing huge beatdown combo pushes, such as Giant, Sparky, P.E.K.K.A, Balloon, etc. This guide will show you how to use this deck, its strengths, its weaknesses, and everything else you will need to know to use it.

I call this deck Mortarpreneur. Why “Mortarpreneur”? Because this deck is extremely unique, with three spells and three buildings, there is no other deck like it. Let’s get started! 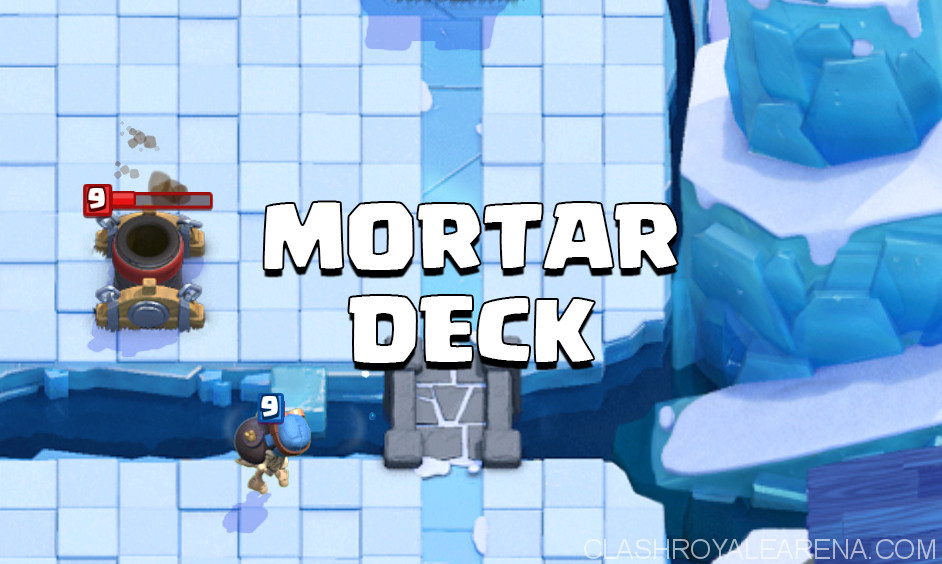 (Note: the subs listed down below are not recommended, but can be used if desired)

The main idea of this deck is to easily counter the opponents pushes with less elixir than they used, then counter push with a Mortar-Cannon/Mortar-Inferno once at high elixir (7+ elixir). Once a mortar is down, you need to protect it at all costs, but make sure to always have a couple elixir left after making a counter to what they try to take out your mortar with. For example, if they put down barbarians right by the mortar, fireball it with light-speed. If you can keep this up enough, you can reach what I call “a state of enlightenment” where something almost not explainable happens. You are countering them so quickly and so elixir-friendly that you are cycling through Mortars so quickly you can get multiple down. The weird part is, when this happens and you have multiple Mortars down, you somehow come to be at full Elixir with 2 or Three Mortars down! It literally almost seems too easy! If you have reached this state, then you pretty much have a guaranteed win.

Sparky: For a sparky combo push, I usually put down my Inferno then a cannon in front of it to take one hit from sparky, while the inferno gets rid of the tanky unit. I then plant Skeletons around the Sparky to take a blast or two, and if necessary, I will Zap it, which resets its charge-up.

P.E.K.K.A: For P.E.K.K.As, I use the same strategy as for giant combos, except you must not let the P.E.K.K.A get to the Inferno Tower! To prevent this, place Archers or Skeletons down to take the blows instead.

That’s all I have for this guide, I hope it was helpful! If you have any questions, feel free to message me here, or kik me at phillylife_74 and I will answer them! Also, feel free to temporarily join my clan: The Ashen Oath! I will not only answer questions you may have, but I will also train you! But our clan won’t just train you with my Mortarpreneur deck, but we also have an extremely good chip cycle trainer, and a few other specialized players to help you out!