In Clash Royale, deciding what cards go into your deck is an extremely important part. A good deck shouldn’t be either too cheap or too expensive. Neither would be effective. The Elixir Collector really helps expensive decks as it provides one Elixir every 9.8s. It effectively allows you to save 6 Elixir and store them for the later uses. Cycle cards (very cheap cards) also help expensive decks and very cheap decks. It doesn’t give you extra Elixir when needed but it allows you to cycle through the deck and get the right cards faster. In this guide, I am going to help you decide which of these two fits your decks best. 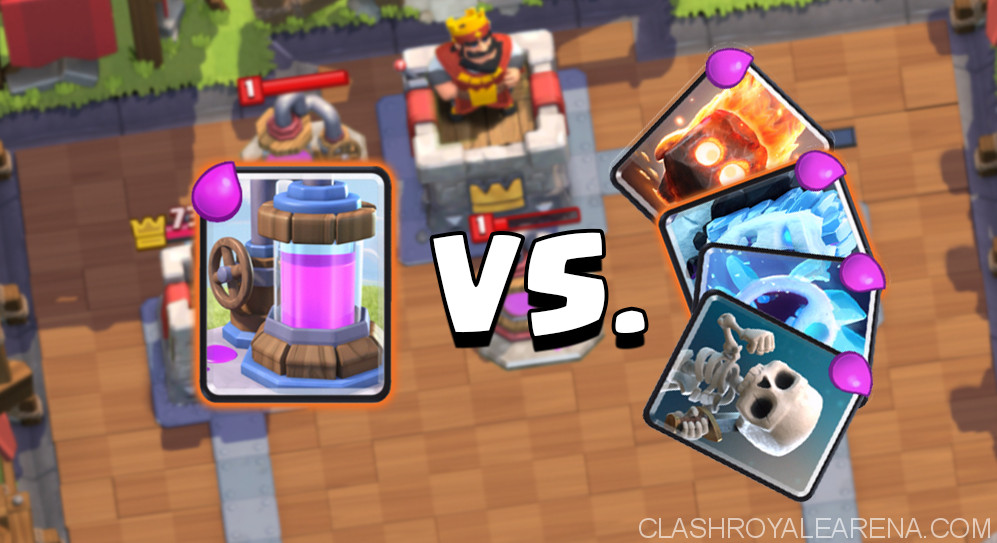 First, let’s talk about Deck Archetype, one of the most important parts you need to take note when deciding between Pump and a Cycle card.

If you use Siege decks, they are pretty expensive, usually between 3.5 and 4.5 avg Elixir cost. They also really rely on attacking from your side of the battle. There are some main attackers of Siege decks I can name here: Princess, X-Bow and Mortar. Truly either a cycle card or an Elixir Collector would be effective in this deck. Please read further to analyze your deck better!

If you use Beatdown decks, which are usually more expensive than the others here (between 4.0 and 5.2 Elixir cost), they really rely on using high risk high reward cards. Some good examples for Beatdown cards I can name here are Golem, Three Musketeers, P.E.K.K.A and Prince. Once played them, If they can reach the Tower, they can deal massive damage. I strongly recommend you use the Elixir Collector in this deck instead of a cycle card.

Control decks are very cheap (usually between 2.3 and 3.9 avg Elixir). This kind of deck relies on getting Positive Elixir trades and then attacking the opponent with that Elixir advantage. For example, If your opponent plays the Three Musketeers right behind the Barbarians (14 Elixir combo) and then you use Fireball + Zap to take out them all (only 6 Elixir) and get +8 Elixir advantage. You can play Hog Rider right after that and your opponent will most likely not have enough Elixir to counter your push in time. If you use this kind of deck, either an Elixir Collector or a cycle card would be nice. You can also keep reading further to analyze your deck better.

If you use Beatdown deck, Elixir Collector is definitely the best choice.

If you use either Siege or Control deck, you might want to analyze your deck a bit further to see which fits it best. Now, let’s take a look at the avg Elixir cost.

: If your avg Elixir is above 4, using Elixir Collector would help you play down the expensive cards faster.

: This depends on the cards you use. If most of your cards are under 7 Elixir, a cycle card is recommended as you can just place down cards to create an unstoppable push crushing your opponent. If you have one outlier like the Three Musketeers for example, It’s better to play Elixir Collector as it helps you gain Elixir to play the high Elixir cost card faster, as well as works as the backup plan providing you extra Elixir to defend against unexpected push.

and below: Unless there is an outlier like Three Musketeers or Golem, you can use a cycle card without worrying about anything! It helps you play defensive cards and offensive cards much faster!

Some other deck types:

Chip decks: Use cheap cards to slowing chip down the Tower. While using this kind of deck, you want to play your cards as fast as possible to do as much damage as possible, that’s why a cycle card is more effective than the Elixir Collector.

Spell bait deck: This kind of deck is rocking right now due to the new Skeleton Army change! It relies on using cards which are weak to spells (Goblin Barrel, Skeleton Army, Minion Horde…) and after your opponent uses the spell on the bait-card, you can place down the high risk high reward card as your opponent won’t be able to counter it. In this deck, cycle card works much stronger than the Elixir Collector as it allows you to out-cycle your opponent, making him never have the right spell in the right time to deal with your cards… 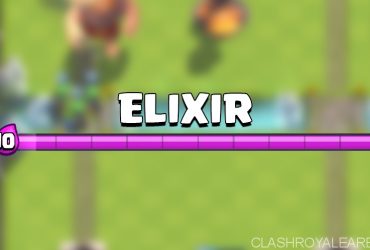 Do you know that the Elixir still continues to regenerate after you hit 10 Elixir? After reading a lot of comments on Clash Royale Arena, I have realized many players … 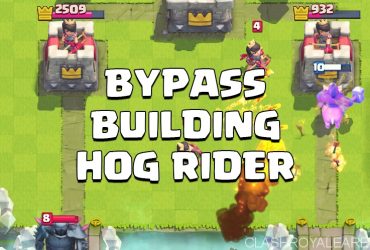 Hello guys, today I am going to so you a stunning new advanced Hog technical which gives you a huge advantage over your opponents: How to bypass buildings while using …