Hello my friends, in this guide, we are going to discuss about the Elixir Advantage, the most important factor in Clash Royale. I will also mention couples of things you are probably doing, both good and bad ways, help you be more conscious of your play style and make you a much better player. 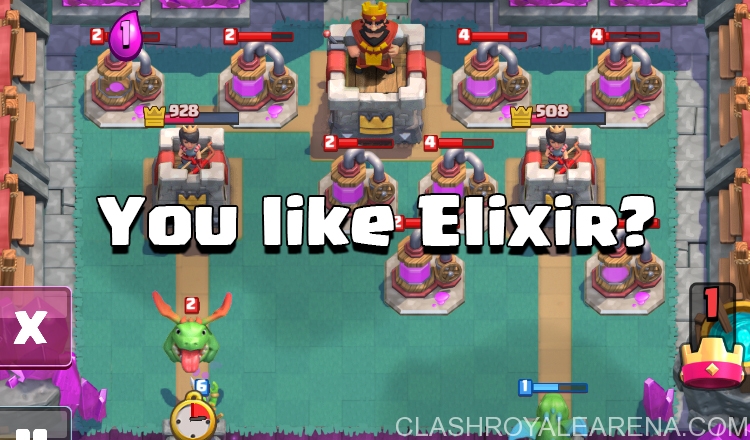 As we all know, both players will receive the same amount of Elixir throughout the battle time and the Cards will go back and forth. It’s very hard to destroy a Tower in game since it’s the goal every player targets. The best time to destroy a Tower is obviously when it is not protected. One way is to simply bait a tower into being undefended then steal it (Goblin Barrel, Prince,…). However, If you can kill high Elixir cards, you will have lots of Elixir to use and your opponent just can’t afford to defend against them.

For example: Drop the Arrows card onto the Goblin Barrel, If you can do it right, your tower will just take the 30 damage from the Barrel and 0 damage from the Goblins. 3 Elixir for 4 Elixir, that’s a gain of 1 Elixir for you. Do it couples of times in the battle and you can earn a few free cards to knock down the enemy Towers (obviously). There are plenty of ways to spend your Elixir but as far as I can see, 5 Elixirs is enough to take down a tower (Balloon, Prince,…).

Yes! You got it! Make enough Elixir trades and you will have enough Elixir to destroy the Tower and win the battle. This is the most reliable way to win Battles in Clash Royale.

What are Proactive cards?

Proactive Cards should be cards which can threaten the enemy Crown Towers and hard to made Elixir-positive trades. They are the cards you can play blind when it hits 10 Elixir. Don’t use any card which can’t deal a single damage to the Tower before it dies, that’s the rule #3 above.

Use your Proactive cards when they don’t have any good Reactive Cards:

What are Reactive cards?

They are cards which help you do positive Elixir trades in the battle. Don’t bother to drop the Arrows on 1 Elixir Skeleton but  a Minion Horde or the Skeleton Army.

Think clearly before using your reactive cards for the positive Elixir trades. Using 3 Elixir to deal with 2 Elixir is going to destroy your own Towers.

Never lose the sight of the end goal: Having more Crowns before the clock goes to 0:00. There is no difference between 1-0 and 3-0. One of the most common mistakes that I have seen is players focus on a defense instead of dealing damage to the enemy Towers, especially at the end of the battle. Your Crown Towers have decent HP and they can take care of themselves in an attack. Don’t Arrow a pack of 3 Goblins or Minions.

A Tower with 1 HP wins the game as much as a Tower with 1000 HP. Sometimes, just let your Tower take hundreds damage and spend those Elixirs on a Proactive cards, which can finish off the enemy Tower. Using the Prince in the opposite lane you are getting attacked is a good common trick. If both players have all Towers: Just keep defending because you still have lots of time to finish off the enemy Towers.

A big thanks to The_RumHam for sharing these tips.

I hope you could learn something new after reading this guide. Don’t forget to share this guide with your friends If you like it, I will really appreciate it, that will help this blog a lot!