Hey, what’s up yo people! It’s Salty Ladder FTW here with a cancerous and powerful deck that I’ve been using! I made this deck myself (I swear, no copying from anywhere else) and it got me up to 3100+ trophies!

In this guide, I will be showing you the Substitutions, Deck Overview, General Gameplan, Matchups, Tips, and Conclusion for this deck.

Enjoy my second guide ever here on CRA! 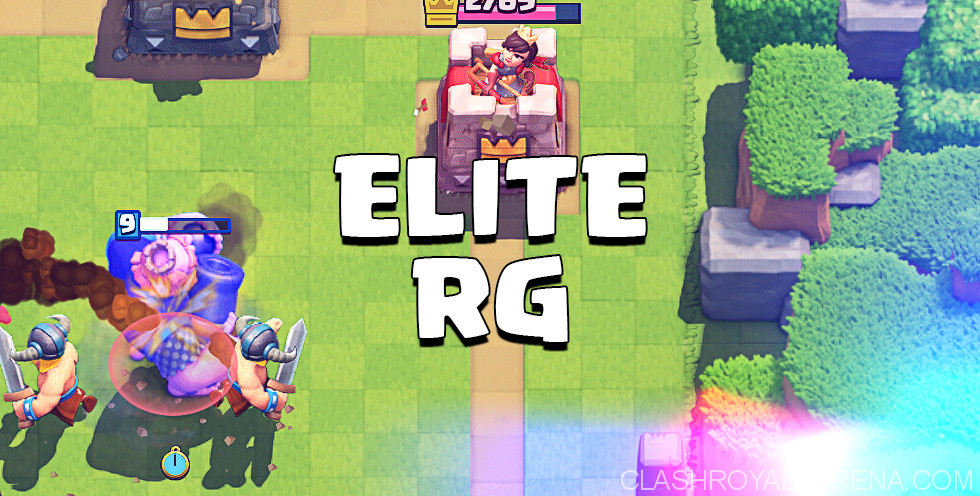 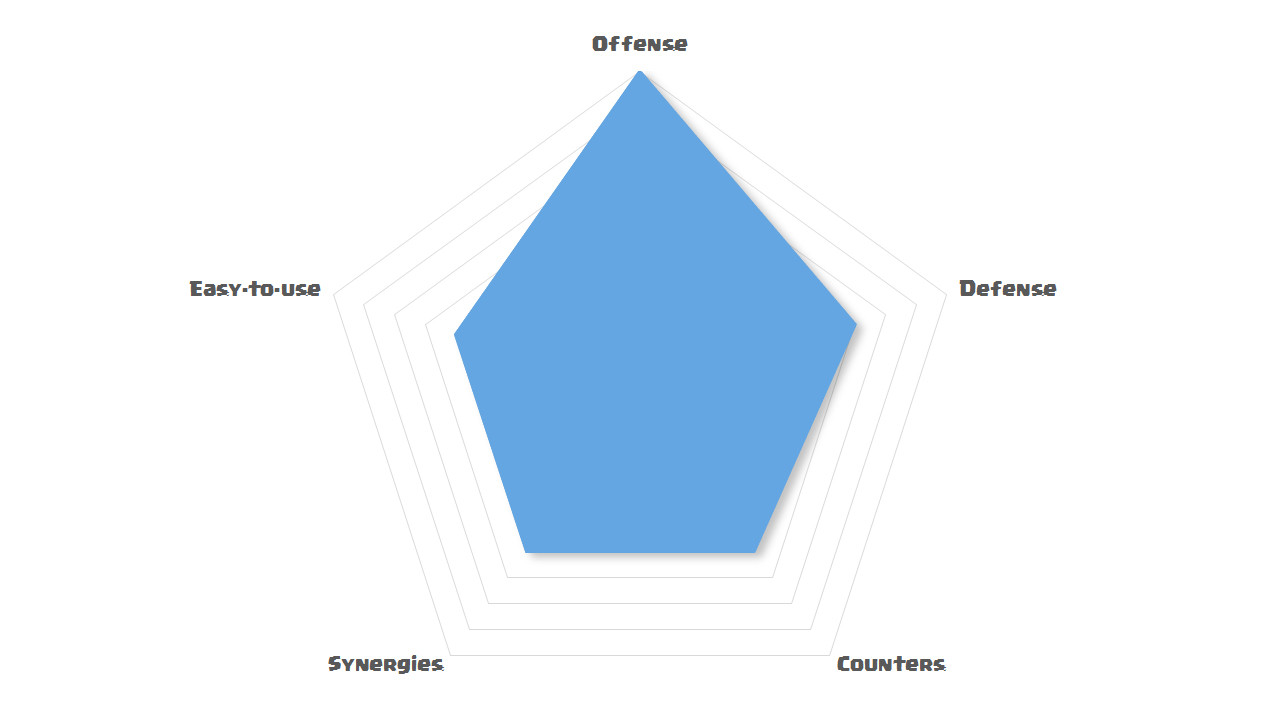 Ice Wizard – Wizard. This will do better against swarms, but it will make this already expensive deck even more expensive. The Wizard doesn’t synergize as well as the Ice Wizard does with the Royal Giant. I recommend you only do this substitution if you don’t have the Ice Wizard.

Musketeer – Dart Goblin. If you are more of the fast, cheap, cycle type of playing, go ahead and do this at your own risk. However, this will weaken the defense against Lavaloon. Unlike Musketeer, Dart Goblin can be killed by Fireball, The Log, and Arrows, giving the opponent an advantage. Unless you are totally confident, I don’t recommend doing this.

Clearly, this deck is a beatdown deck. You start by pumping up and doing chip damage with the RG during Normal Elixir Time. Then, during Double Elixir Time, you overcommit with the offense! I bet some of you just passed out when you heard that you are allowed to overcommit, but seriously, RG is the perfect card to overcommit with. If you start spamming stuff behind your big, burly tank a.k.a the Royal Giant, it will leave your opponent in a panic on how to defend this HUGE push, and you will get the W-I-N!

This deck is pretty easy to use. No high-level skill is required, just do good defense, overwhelming offense, and laugh at the opponent when you win. 😛

Your primary push for Normal Elixir Time is Royal Giant + Ice Wizard + Sparky + Zap/ The Log. With the help of the Elixir Collector, you can make this push before Double Elixir Time and maybe take the tower.

Your secondary push is Elite Barbarians + Zap. This will force the opponent to react within seconds because Ebarbs are very fast, or else he will be in big trouble once his tower goes down. You can also do this push when the opponent puts an expensive tank in the back. He will end up splitting his push since he was forced to defend the Ebarbs. The good thing about this push is that it costs less than 10 elixir, giving you leftover elixir to prepare for the opponent’s push. Once the tank gets to the bridge, you will probably have a full elixir bar, and you will be able to defend.

Now, time for the crazy offense during Double Elixir Time! This is when you can overcommit. Spam, spam, spam with everything you have, as your elixir will regain quickly again and your pump will pump it up! Your primary push for this period is… EVERYTHING! You really don’t need to care if the opponent rushes on the other lane, since your push will definitely take the tower and maybe even the three crown!

After you take down one of the Arena Towers, place your RG in the pocket. The pocket is the space you get after killing one of the Arena Towers, and it’s located in the middle of the opponent’s territory. Once placing the RG there, he will turn and immediately start shooting the other Arena Tower, giving you a chance to quickly take the second tower and shouting out “Good Game!”. Just make sure to not place him at the farthest tile possible, or else the King Tower will start firing at your RG, causing him to die quicker. You don’t want that to happen, so just place him one tile behind the farthest tile so the King Tower won’t engage in the fight.

Overall, this deck is spectacular on offense. With two win conditions, RG and Elite Barbarians, taking a tower shouldn’t be that hard!

Your main tank killer is the Elite Barbarians. But, they are pretty expensive, so  make sure you have a Collector down so you can quickly regain your elixir for any incoming support troop.

The Ice Wizard is one of the best defensive troops in the game because of his constant slow-movement ability, so be sure to use him a lot to help out on defense! One of the most surprising things is that he can kill a GIANT SKELETON. Can you believe that?! That just proves that he is very capable of doing almost anything else during defense if he can kill a full tank.

Sometimes, during clutch battles, you may want to use your Collector on defense. For example, if your tower has 300 health left, there is 20 seconds left on the clock, and the opponent doesn’t have any high-damage spell, put it right in front of your tower so no troop can damage your tower immediately (except Miner or Goblin Barrel, but you can easily kill those two) and you can grab the clutch win. This is only for emergencies, but it does help a lot on defense.

When defending with Ice Wizard and Musketeer, place them far away from each other so the opponent can’t use a high value Fireball, Rocket, or Lightning.

Even the #trashcanonwheels is good on defense. She can blast clumps of troops and get great value. Like I said above, place her far away from your other defensive troops so the opponent won’t get tremendous value from a Fireball, Lightning, or Rocket.

Overall this deck does pretty well on defense, with many defensive options. I think the offense is slightly better, but if you play well, the defense can shine too.

Elite Barbarians for the tank, Ice Wizard and Musketeer for extra insurance. If the opponent pairs his tank with Graveyard, it can be pretty painful. Your goal is to get rid of the tank as quickly as possible so your Arena Tower can focus on the Graveyard. You will take at least 500 damage by doing this, but the quicker you take out the tank, the better. Then, you can use your troops to take out the Graveyard and then counter push like a madman.

RG can take out both buildings. If he tries to kill your RG before he takes out the X-Bow/Mortar, use The Log or Zap, depending on what swarm he uses. If he places an Inferno Tower next to it, snipe it with RG (he can out range the Inferno Tower by 0.5 tiles) and he will tank the shots from the X-Bow/Mortar.  After he takes out the Inferno, he will take out the Siege building. This deck does very well against these decks.

Use RG to snipe the Furnace and any other building they have. For the Miner, use Elite Barbarians and then counter push. You have to prevent the opponent from chipping your tower, because once your tower goes down, it’s hard to make a comeback against control decks since they are defense-oriented. Not THAT hard to win against control decks, just don’t lose a tower or else.

Ok, it is very common to lose a tower against these decks in the first minute of the battle. But, unlike control decks, they aren’t as good at defense, so you can easily rip through the opponent’s defenses and crush his tower. On the side with less health left, I like to drop Sparky next to the tower so the opponent wouldn’t be able to put his Hog Rider or else he will be blasted. Protecting the tower is the key to holding on to the win against Hog decks.

It all comes down to who has the higher level RG, sigh. The battle will be very painful for both players.

Ice Wizard, Musketeer. Make sure to place them far away from each other! After defending, counter push immediately. Since Lavaloon is costly, the opponent will have less elixir to defend, giving you the advantage.

Thanks for checking out my guide! I hope you try out my deck (sorry that it has three legendaries) and push trophies! This deck is designed for the ladder, not challenges because tournament level RG is very weak, like Supercell mentioned.

Have a great day clashing!