Hey guys whats going, RSivak back with a cool new Elite Miner Control Chip Deck I have been testing. This deck focuses on counter-pushing and depending on your Miner for chip damage. It is pretty cheap deck with an average elixir cost of 3.0. Lets get into the cards! 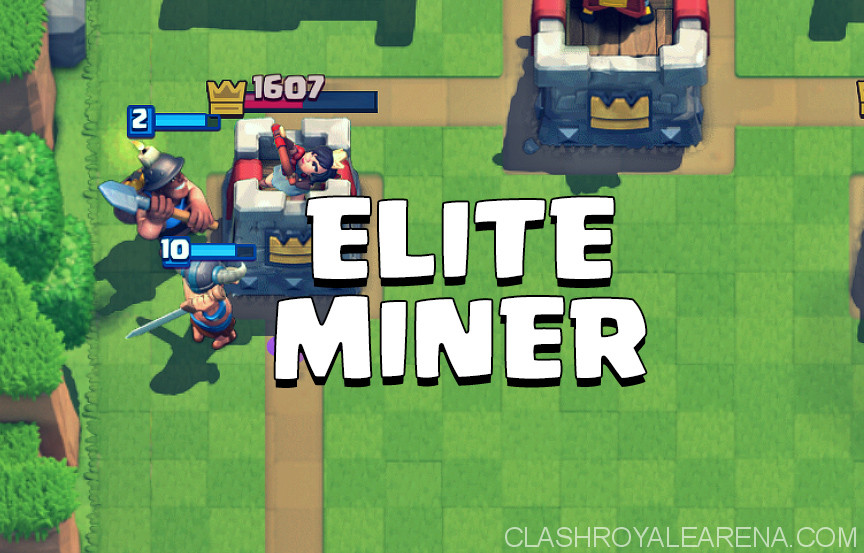 Fireball: Super good value spell card, very good at dealing with Archers, Musketeers, Wizards, Witches, Barbarians, and Huts. This card is a great card to get you elixir advantages, and finish off any weakened towers for the win.


Elite Barbarians: Very strong cards right now, these guys will hack and smack through pretty mush anything. I like using them on defense, more than offense, because they are so capable of shutting down any Tanks so quickly. Hard counter to the dreaded Royal Giant, these guys are a great addition to this deck. Read more about them at here.


Miner: Your chip damage maestro. Miner is my favorite card, and for good reason, he can chip out a hefty sum of damage (512 as a level 1 on a level 9 Arena Tower). He is likely to be your main damage on the Arena Tower. I like to hover Zap or Fireball and see if anything they drop to counter the Miner is worth one of the spells, allowing the Miner to add more damage and chipping the tower with a spell.

Zap: Kills so many cheap and weak troops, and can weaken Minions, and Archers. This card doesn’t really need to big of an explanation.

Ice Spirit: Great cycle card, cheap and so useful at halting a push for a bit allowing you to build enough defenses in a pinch. Shuts down a lone, full health Mega Minion coming at your tower. Reduces damage for an equally leveled Musketeer. I like to drop this guy at the bridge to tank, then drop a Miner onto the tower. The Miner gets an extra 2 hits onto the tower allowing him to deal up to 640 damage at tourney standard.

Ice Golem: Nice tank and distraction card for a cheap cost, pretty much can distract a Bowler forever. Great mini tank giving your Miner time to deal damage, drop the Ice Golem at the bridge and a Miner at the tower and watch them be forced to defend a simple 5 elixir push that could otherwise devastate their tower. Take a look at here for more Ice Golem tips!


Archers: Couple of ladies with style, picking off troops on the ground and in the air. Cheap and effective counter to Graveyard. Great for dealing with most pushes, supplementing a decent chunk of damage to enemy pushes.

Mega Minion: Pretty much a given, this card has high damage output for a low elixir cost, perfect air defense if needed, and can devastate any incoming support units.

This deck strategy is pretty simple. I like to get my Miner on one of their towers and slowly Zap, Fireball, Ice Spirit any defenses they have against my Miner.

This is a defense heavy deck. I like to defend then counter push with my defending troops by adding a Miner onto their tower.

Maintaining an elixir advantage is key, as your main win condition will end up being the Miner chipping away at their tower.

When playing the Miner, make sure your Miner placements vary! You do not want to waste your Miner, so play it in multiple different locations.

If you finish off a Graveyard with Archers, drop an Ice Golem in front of them at the bridge and a Miner a the tower. The Ice Golem tanks for both Miner and Archers allowing them to start chipping the tower down.

This deck can counter pretty much any deck, only decks I had trouble with were Giant Bowler in Double Elixir, as they tend to be able to get multiple Giants and Bowlers down quite easily, and they can swamp you if you are not careful.

Lava Lightning might be a problem, but its rare, and you can usually Fireball and Zap all of their support behind the Hound.

That’s about it guys, hope you enjoyed this great Miner deck, and hope it pushed you further in trophies.