Hey Guys, Godzilla here (Hog Rider FTW), and I am bringing to you the most OP Hog NW Elite Barbs deck for Elite Players like meJ.

This is the deck that got me to my Personal Best of 4704, with Level 11 Elite Barbarians so they don’t need to be over leveled to be good.

Anyways, here is the deck! 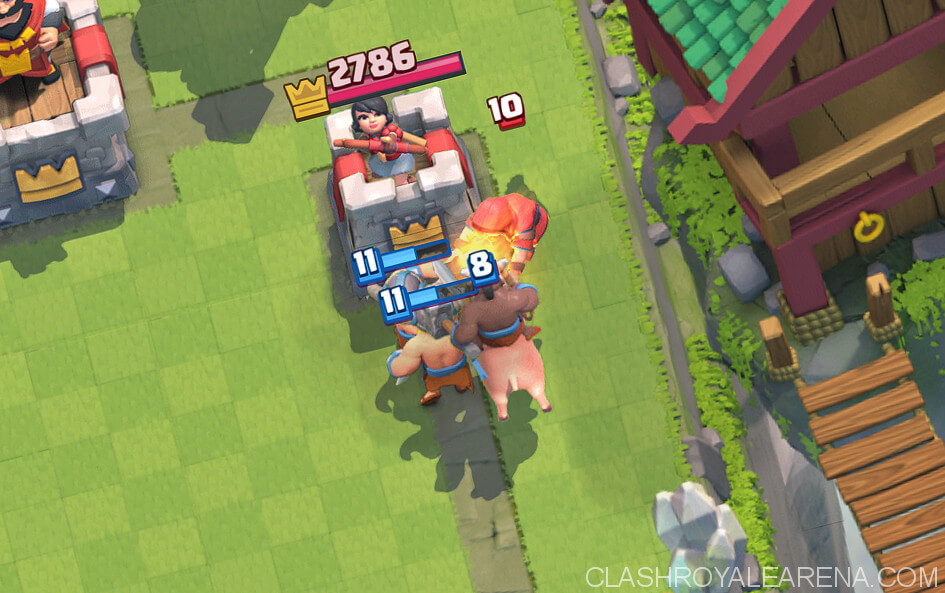 Hog Rider: This card is your primary win condition, so you have to spam Hog whenever you have the chance.

Best times to push are when the opponent puts something expensive at the back, or just used a lot of elixir on an offensive push.

If he puts down an Elixir Collector, make him regret it, if you can’t, then Fireball it.

Also use it to bait Elite Barb counters, such as regular Barbs, Knight, Ice Spirit, etc.

Elite Barbarians: Use this card to brutally punish every mistake your opponent makes, or make him regret putting down a Pump.

This card is also great on defense; they shut down 10+ Elixir pushes, and make your opponent Rage.

If they have around ½ health left, then drop a Hog or Ice Golem in front to tank for a counter push. If they reach the Tower, it’s GG.

Also, remember to NEVER rush with them if Zap isn’t in rotation. It is heart breaking to watch them get wrecked by Skeleton Army.

Night Witch: The most OP card since the Elite Barb Meta (the best one imo). She is your main defense, so do not push with her offensively, unless it is a counter push.

Beware of Executioner, Lightning, and Zap.

Electro Wizard: He is your anti-trashcanonwheels, so use him wisely if you are facing one.

His stun is also very helpful on defense, especially since he resets the charge of Battle Ram.

Executioner/Tornado (replacements): They also serve the same purpose as Night Witch and E Wiz, they are mainly for defense. The Exenado combo can shut down entire pushes.

Zap: No explanation needed. Use with Elite Barbarians. Use to clear swarms.

Goblin Gang: Your swarm troop. Their DPS is second to only E Barbarians in this deck.

Use to kill lone tanks and point damage troops such as Musketeer, P.E.K.K.A, etc.

Fireball: Use to clear support troops such as Wizard, Musketeer, etc.

Save it for Three Musketeers if you are facing them.

Ice Golem: Use as a mini tank on defense, or to tank for Hog/E Barbarians on offense.

P.E.K.K.A: This is an annoying one, use clear support with Fireball, and use Ice Golem/Goblin Gang to dis tract while E wiz takes it out.

Golem NW:  Use NW/E Barbarians to kill Golem while you tank/clear support with Ice Golem and Fireball. Kill the support first. Can make insane counter pushes.  Push when he puts down Golem, but don’t overcommit.

Royal Giant: E Barbarians and Night Witch cut through it like butter, and sets you up for a counter push.

Elite Barbarians: Do not defend their E Barbarians with yours, use Ice Golem and Night Witch or E wiz.

Three Musketeers: Do not Fireball Pump, Fireball Zap the two Musketeers (when the split) in case they have Heal. Simply, rush Hog or e Barbarians if they put down Pump. E Barbarians can also kill the Musketeers, if you screw up and Fireball Pump. E wiz’s spawn Zap + Regular Zap can kill Minion Horde, leaving a full health E wiz for a counter push.

Hog Cycle: Defend Hog with Night Witch, e wiz, or Goblin Gang, and then counter push. Tornado the Hog to the king Tower if you are using the Exenado version.

Spell Bait: VERY ANNOYING, luckily, I only see them once in 20 matches. Save Zap to rush with E Barbarians, use Fireball/anything you have on Goblin Barrel. Exenado makes it a lot easier. Usually you lose due to the amount of swarms. I rarely see this, so it isn’t a big deal.

Lava Hound: Start with Night Witch to accumulate Bats and use e wiz. Exenado makes it a lot easier. Again I only see this deck 1 in 15 matches, so it’s okay.

Anyway, that’s it for this guide.  Go ahead and enjoy this deck, it even works in challenges, I’ve gotten 12 wins in classic challenges 3 times, I haven’t tried it in Grand Challenges though.

Feel free to comment, or even hate, if you want to. Make sure to BM at the end.

Have a great time! Cya