My name is SCorpSCilla and today I am going to show one of the most funniest and useful decks I’ve made, the Mirror Elite Furnace Deck. 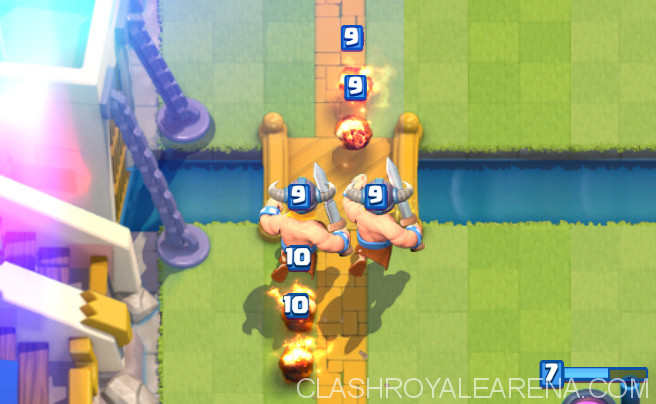 Elite Barbarians – Obviously one of the best cards at the moment, or, they are the current meta!

At the time of this writing (for future reference of updates) they are EXTREMELY powerful, if not on the verge of being OP. They will shred through all the tanks, while tanking themselves. They are basically the more OP Lumberjacks.

If even one Elite Barbarian gets one shot off, at tournament standards, this is more than a shot from the Lumberjack. I say if, because most of the time the other player will panic and basically send everything to stop it, unless they are ignorant, which they should not be.

Furnace – A steady stream of damage at tournament standards, anti Minion Horde, a place to lure Giants/Hog Riders in, they will help bait all the tanks but NOT the support units if placed correctly. If the situation requires for it, you can put it in a position where the support units would attack, but I mean why would you when you can build up a push and use the Furnace to support the Elite Barbarians. This is a replacement if you don’t have the Fire Spirits.

Fire Spirits – I personally think that Furnace and Fire Spirits are one of the most useful cards in the game, other than Zap and Log.

Fire Spirits can solo regular Barbs if place correctly, same with the Mini P.E.K.K.A, Goblin Barrel, Minion Horde, and can help take out the Elite Barbarians.

I advise that you don’t panic during a push and save them for something useful. Example, Don’t try to use them on the musketeer that’s totally freaking you out when he has the Minion Horde in rotation.

Mirror – Basically an additional card to help get whatever seems useful at the moment. Mirror Furnace is totally fine with me as long as you have plenty of elixir.

I’ve seen too many times when a guy uses his Skeleton Army because I just used my Log, only to get shredded by split Archers or Mirrored Log.

The Log – I repeat, THE MOST USEFUL CARD IN THE GAME.

With it’s damage similar to an arrows and its knockback effect, it can shut down a push, especially those pesky Zap bait decks.

It is just so satisfying to see your opponent’s Goblin Barrel, princess, and Fire Spirits get shut down by a Log.

If you want to, you can trade it out for Zap as many people don’t have a Log. The Zap’s stun rate is a replacement for the Log’s knockback and range.

This card is very useful for tanking a lot of shots and its death damage can kill Skeleton Army at tournament standard and bring Minions to low health allowing other air troops to bring it down with ease. It can kite Mini P.E.K.K.A, P.E.K.K.A, Knight, Valkyrie, Mega Minion, and a lot of other cards.

Read more tips for the Ice Golem at here!

Archers – Ah Archers. These two pink girls can do a lot of chip damage if left alone, their split push allows them to either defend or attack on both sides.

Skeleton Army get be dealt with by Archers in the center if you don’t have a Log or Mirror in rotation. This position allows the Archers to split push as well, allowing something to help with another surprise attack.

They help a lot by hitting Lava Hounds, killing Mega Minions, Minions, and with Elite Barbarians.

They take down Balloons although at the risk of dying to the death damage, and they survive Logs and Zaps.

Mega Minion – And the Mega Minion. Another classic popular card.

This bad boy can survive a lot of spells except for Lighting and Rocket, it is the secondary tank killer if you are forced to use it and Elite Barbarians are out of rotation. It is in the air, so it can deal with semi tanks on the ground such as Bowler, valkrie, knight, and even dark prince if dealt with properly

Well guys, thanks for reading this guide. If you have any questions, put it below in the comments and our team of clash royalers will answer your question. Join our clan, G.O.D. FOREVER. This is SCorpSCilla, and see you guys later.