I’m VozPirate, and today I will be showing you my Elite Barbarians+Rocket deck.

This is my first time writing a guide for a deck, so please leave some feedback and comments. I’ve been trying to push into A8 for a long time now, always averaging at about 2100~ trophies. This deck got me to A8 in a few hours! This is a weird deck, but I will be trying my best to help you do the same. 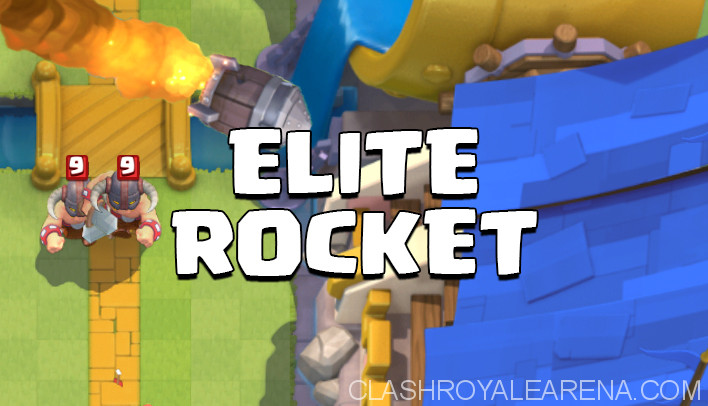 In this section I will be going over the cards in this deck, what they do in this deck, and a few (possibly better) replacements for some cards.

Elite Barbarians – This is basically your only win condition, since none of the other cards do much damage, excluding the Rocket. Use this on defense to take down Hog Riders, Giants, Royal Giants and the like. With some precise timing, you can kill high DPS or splash troops such as Wizard, Sparky and Mini P.E.K.K.A while taking minimal damage to set up a counterpush. Great when paired with Zap.
No replacements for this card because this deck is based around it.

Rocket – This card is quite useful in taking out the remaining HP on towers, or killing grouped up cards for a positive Elixir trade. Secondary win condition.
This can be replaced with Fireball.

Baby Dragon – This is your splash damage and main air-targeting troop. Save this for defense and start a counterpush, or pair this with Elite Barbarians for a surprise rush.
Could possibly be replaced with Valkyrie or ice Wizard but I wouldn’t.

Spear Goblins – This card is vital on defense since it targets air troops and deals good damage with the Arena Towers. Do not use this actively on offense unless you really feel the need to.
Could be replaced with archers or other air-targeting, high-DPS ranged troop.

Goblin Barrel – This card is great for chipping away at the Arena Tower. I would recommend to use it ASAP when you get it, since this gives room for a more defensive card (air-targeting).
Could (should) be replaced with miner but I don’t have.

Zap – One of the most versatile cards in the game, it is vital in many situations such as wiping away those pesky Skeleton Armys on offense, or reducing those Minion Hordes to nothing.
Can be replaced with Arrows, Log, or Princess.

Tombstone – This is your defensive building, great for Hog Riders, P.E.K.K.As, Knights and the like. Pair with Spear Goblins for some quick and easy chip damage.
Tornado would be the best replacement if you know how to use it. Goblin Hut or cannon will be a decent replacement.

Skeleton Army – This is your versatile and cheap swarm card. Distracts P.E.K.K.As, kills Hog Riders, Giants, Knights and other high DPS cards. Can also be used on offense but very risky, only if they have used Zap.
Guards will be decent

You can have two different playstyles with this deck.

The first resembles the beatdown style deck. In this case, you are ultimately trying to cycle your cards so that you have Elite Barbarians, a backup troop such as Baby Dragon, and Zap. Your offense is basically a split-lane push with Elite Barbarians and the support/tank troop on the preferred side. Based on how your enemy reacts, you must now judge where, when, and if to use Zap. Doing this exact push over and over again will not win you games. You need to change and adapt to the situation. This will be shown in below in the video. This is my preferred playstyle with this deck.

The second playstyle resembles more of a control deck. Simply, what you want to do is play defense and counterpush with your Elite Barbarians on one lane with support troops all focused on one lane. To do this, you must build an Elixir advantage or be very smart and make some predictions. With some luck, you will be able to take or almost take down a tower.

The Rocket is very handy for taking down towers with a few hundred HP left, or helping to sHut down pushes like Giant+Witch+Musketeer, or killing any grouped up troops, as long as it ends with a positive Elixir trade. This is how I win most of my games with this deck.

Of course, you will still need to defend as you normally would. Make sure to space out your troops on defense because they are all extremely vulnerable to splash damage.

As I said earlier, the type of push will depend on the type of playstyle you are using. As I also said earlier, you will not win games by doing the same push over and over. You need to be versatile adapt to the situation, no matter the playstyle. Sometimes you may change playstyle mid game, I know that I have.

Below are some examples of pushes you can do. Card replacements not considered.

Elite Barbarians + Baby Dragon + Zap? (Split Push): This is your main push. Both units should be dropped close to the river. Zap can be included depending on how your opponent reacts. Use it often, but use it wisely. Always have a general idea on how much Elixir your opponent has. Adapt to the situation. Costs 12 Elixir.

Elite Barbarians + Zap (One lane): Great to start off the game with. Slightly risky because you don’t know if they have a Giant or hog etc… Zap is needed unless the enemy is AFK… Costs 8 Elixir.

Baby Dragon + Spear Goblins (One Lane): Not a relevant push. Used to maybe get some chip damage for you to Rocket their tower in overtime. Started off a counterpush. Costs 6 Elixir.

Goblin Barrel + Spear Goblins (One Lane): The same thing as above, but a bit more reasonable if you have these two cards in your starting hand, and gets some good chip damage. Costs 5 Elixir.

Baby Dragon + Elite Barbarians + Goblin Barrel + Zap? (Split Push): This is an amped up version of your main push. Most likely off a counterpush. Same thing but now you need to judge which side to throw the Goblin Barrel too. Only in 2x Elixir time. Costs 15 Elixir.

Baby Dragon + Elite Barbarians + Goblin Barrel + Zap? (One lane): Same thing as above but instead you are going all out in one lane. Fireball can reduce this push by a lot. Costs 15 Elixir.

Lava Hound: You can’t really do much against this deck. Do not aim for a 0-0 draw because you will definitely lose with only two air targeting cards. Your best bet on defense is to distract or kill the backup troops and cycle to your air targeting troops. Try to make surprise pushes on the opposite lane with the Elite Barbarians to get a 1-1 draw in overtime. offense is the best defense in this case.

Giant/Royal Giant: The Giants should be quite easy. Tombstone to distract and Skeleton Army or Elite Barbarians to kill him off. The support troops can be cleared with Baby Dragon or Rocket.

Hog Cycle: Tombstone in the middle can kill of a hog, taking only 1 hit. Elite Barbarians or Skeleton Army can be used to deny him any hits, but watch out for Zap.

Spawner/Hut Decks: These are extremely annoying. Save your Rocket for killing the BARBARIAN Hut and hit the tower if you can. Place down your Tombstone in the middle to distract the goblins to prevent chip damage. Your only chance would be making a surprise push in the other lane, but I would play for a 0-0 draw.

3 Musketeers: When they split, use your Rocket to kill two of them, and use Skeleton Army or Elite Barbarians in the other lane to kill the lone one. If they don’t split, just Rocket them.

Sparky Deck: Wait for the Sparky to come onto your side and surround him with Skeleton Army. Elite Barbarians can kill Sparky without taking a hit if you place them right after it shoots. You can also use Rocket if he places Sparky at the back and get some tower damage.

Rocket Cycle: As soon as he sends out his Rocket, put Elite Barbarians in one lane and Zap the troops he uses to defend. Should be an easy win for you. Use Rocket to kill off his Huts if he uses any.

Golem: Be careful with your card rotation on this one. Try to kill his support cards first, let the golem get a few hits. He will melt if you have Elite Barbarians on him. If the right cards are out of rotation on defense though, it’s GG….

Ok guys, that’s the complete guide for this deck. If you have any questions or feedback, please leave a comment below.

Have fun while playing with this Elite Barbarians Rocket deck and good luck on pushing out of Arena 7!