Heeey what’s up guys, It’s Zigge here with my Electro Miner Control Deck which got me 12 wins in the Electro Wizard Challenge!

First I just wanna say that this deck is very easy to use and doesn’t require any hardcore skills. Which means, everyone of you can get an Electro Wizard! I did. Anyways, without more bragging, let’s see how the deck works! 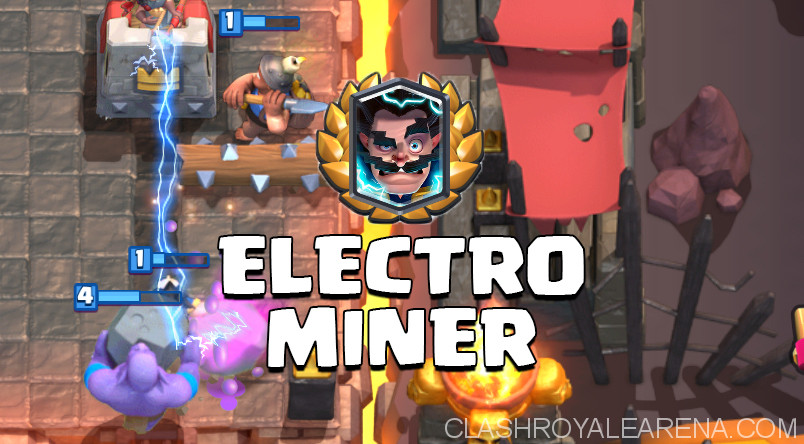 Read more about the Electro Wizard at here.

Miner – Use the Miner to chip away at your opponents tower. Miner + Fireball can be devastating if they counter with Barbarians or Skeleton Army. The Miner is also good at taking out a Princess or Elixir Collector. A fun thing to do is, send your Miner to their tower, then Fireball their Princess or Elixir Collector, what will happen is, they will try to protect it but, they have nothing to protect it against! Your Fireball will take out the Princess/Pump and the troops they try to protect it with!

Ice Spirit – The Ice Spirit is, as you know, one of the best cards in the game. She can’t survive an Electro Wizard bolt which is unfortunate. But she’s a good card anyways a she can take out a Minion Horde with the help of a Zap for a positive Elixir trade. Bowler + Ice Spirit is my favorite combo against Elite Barbarians.

Furnace – Furnace is such an excellent card in this deck. It will pull your opponent troops to the middle, allowing both of your Arena Tower to target it. It will apply apply pressure. If timed correctly, the Miner can tank for your Fire Spirits, allowing two waves to get to the tower. That is insane 1124 damage on their tower! The best thing is, that your Furnace will continue to spawn Fire Spirits which is another 676 damage.

Fireball – Fireball is a necessary card in this deck because it kill Electro Wizard. I use Fireball mostly on defense but a Fireball to finish their tower or a with a Miner for 677 damage. Fireball + Zap can take out Three Musketeers or Barbarians.

Bowler – With all the Fireball bait decks going around in this Special Event, Bowler is an excellent card. You don’t have to be afraid of Three Musketeers or Barbarians when you’ve just fireballed their Electro Wizard, because you have the Bowler! Big blue Dark Elixir drinking dude can also counterpush! Just send in a Miner after a successful defense!

Skeletons – Skeletons are very good because they can counter a Meta Minion or Mini P.E.K.K.A all by themselves. They are used to kite, distract and pull units. And they work very well with the Bowler too! They can pull away units allowing your Bowler extra shots.

Zap – You know why I use Zap and how to use it.

Elite Barbarians are so hard to defend, what do I do against them?

Bowler + Ice Spirit completely takes out Elite Barbarians on your side of the map. Electro Wizard can be used behind your Bowler if they use them defensively.

I have no air DPS, how do I do against Mega Minion?

When do I use the Miner + Fireball combo?

Only when you know your opponent is gonna counter your Miner with Barbarians or Skeleton Army.

Against other Electro Wizard challenge decks

Note: Furnace Spirits are included in every push.

Note: A Furnace should be included in very defense to pull enemy units.

Guys that’s it for my guide. Hope you guys can win the Electro Wizard challenge with this deck!

Comment if you need any help or advice and peace out!