Hey guys what’s up it’s me Zigge here back with another guide for you guys. First I just wanna say that I took a break from deck building and writing guides but from now on I’ll try to be more active and write guides for you guys. I also wanna say that I’m only gonna post decks that I personally use, so it’s mostly gonna be Hog decks and sometimes a Giant or Miner deck. 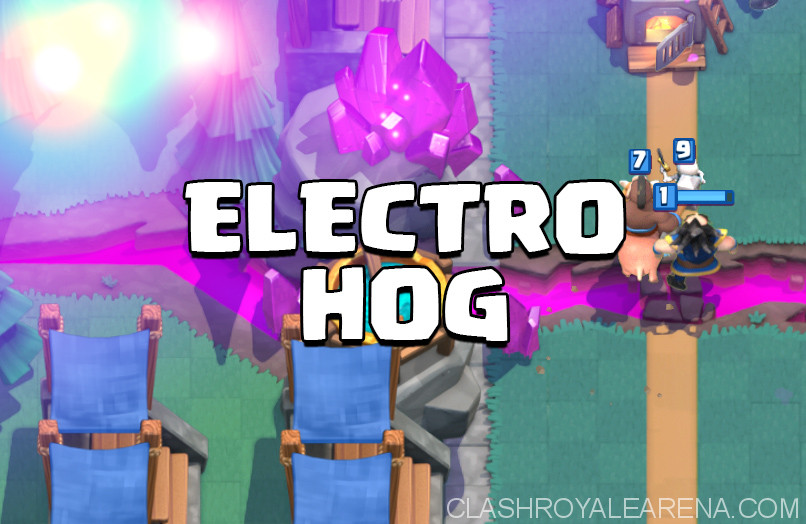 Also this will be a very different guide from my other ones. I’ve learned a lot about the game, been trophy pushing a lot, exploring the Meta and such, so this guide will be a bit longer and consists of  two parts, the card breakdown, which will itself be divided into 3 parts and the basic gameplan. But without more talking, let’s get into the deck!

The Hog Rider, Ice Golem and Ice Spirit are in every true Frozen Hog deck. They’re the core of the deck and the main offensive cards. Here I’m gonna go through each of the cards and how to use them in combination.

This is the tank for your Hog Rider. It will absorb up to 1047 damage from your opponents’ Arena Tower (at tourney standard). It will also kill a Skeleton Army, bring down Goblins or Minions to zappable range etc, and that’s part of the reason why Ice Golem pairs so well with Zap and why you should try to always have the Zap in hand when going offensive with the Ice Golem.

The Ice Golem is a very unique card, and therefore hard to replace, but if you don’t have it, try a Knight, it’ll work basically the same way just that he doesn’t target buildings only.

Here are the reasons to why it’s so unique;

In conclusion this basically means that the Ice Golem is the best card in the game for kiting, because;

With its rather high HP, it can survive anything but a Sparky blast or a Rocket

But, because of how versatile it is, this has actually become a problem for many decks, especially Hog decks, because you want the Ice Golem both defensively, which makes you not able to pair it with your Hog Rider.

Hog will be the meat of your push, the one who will deal damage to your opponents’ towers. If you have the Hog Rider and any other cheap support like Ice Golem, Ice Spirit or  Zap in hand, just go for it. There’s a big chance your opponent won’t have their ideal Hog Rider counter in hand and that’s in your favor. A Hog Rider Minions push could also work, but only do this once you knows your opponent’s deck. Chances are they have a Fireball or a Wizard, which both are really hard counters to Hog Minions.

It’s very situational when to use the Hog, but I’ll try to explain.

Always use your Hog when;

In x2 Elixir, you can start to out-cycle your opponent. This deck is such cheap and you can quickly cycle through the 1 and 2 cost cards, so try to have your cycle like this;

When going into x2 Elixir. This is a cycle of 10 Elixir, so you should be able to execute it in <20 seconds.

Note: I will later explain what to do if you can’t get to the tower with your Hog, can’t out-cycle them or when they have multiple counters.

The Icing on the Cake – Ice(ing) Spirit (pun intended)

The Ice Spirit has been one of the best cards in the game since release. I remember people saying it needed a buff, but its first change was a nerf. What people forgot was that this card costs one Elixir, one Elixir. It can tank one and shut down these cards for a positive Elixir trade;

And it can almost shut down these cards;

Electro Wizard + Cannon will be the main defensive combo that you use against basically any push your opponent makes. The Cannon will deal high damage while the Electro Wizard’s spawn zap will take out any swarm and his constant stuns will allow the Cannon to deal more damage.

The perfect defense against enemy Hog Riders or Giants. Deals high damage while not being vulnerable to Zap. Do the 4-3 plant against a Giant or Golem and the 3-2 plant against a Hog Rider, just to make sure it gets pulled.

Fun fact: The Hog Rider has the longest sight range in the game, at 9.5 tiles, this actually allows you to do a 5-3 plant against him. Although I don’t recommend doing this because if you fail your tower will be almost done for.

The Cannon is so easy to use I don’t think there’s much more to say about it.

This shockingly good ranged attacker is one of his kind. He is the only troop in the game that drops a spell before the actual troops comes out and the only card that will attack two cards at the same time. He can take out Minions and will only take a few hits from them and then you can counterpush with him. His fast movement speed makes him ideal to use with Hog Rider and the stun mechanic works well with Miner. This makes him more of a support card in chip cycle deck than in beatdown decks.

The Electro Wizard also works well with Ice Golem. Together they can take out all of these cards;

These are the last cards in the game that don’t fill any specific function or are just standard cards.

These guys are mostly for cleaning up ground targeting enemy defensive troops that they’ve used to counter your Hog Rider. Examples of these are Barbarians and Skeleton Army. These flying Goblins work so well with the Ice Golem that they can take out almost any card in the game, four examples are;

They also pair well with Hog Rider unless your opponent has a Fireball, Wizard etc. to counter.

The 1 Elixir Skeletons are my favorite card in the entire game. They can easily distract a Mini P.E.K.K.A or completely kill a Prince with the help of almost anything. They’re also good for cycling your deck and can deal lots of damage to your opponent’s building targeting troops like Giant or Hog Rider. They also pair very well with Ice Golem because he can tank hits from a glass cannon like Wizard while the Skeletons chip away at him.

Lone Skeletons can counter all of these cards; (on your side of the Arena)

So yeah, if you haven’t figured yet the 1 Elixir Skellies are one of the best cards in the game, especially now that they’re four, instead of three.

I bet you all know how to use Zap, so I’m just gonna say that it’s great for resetting the Prince’s charge, Inferno Tower or to instantly take out a Skeleton Army from your opponent.

Zap is great to use vs. all these cards;

This is a really aggressive Hog Cycle deck so always keep the pressure on. When I play a Hog cycle deck this is my mindset:

”I always get behind in Elixir, I always spend more than my opponent, but I never get to pay it back because the match ends in time.”

And I think that’s how you should think when playing Hog cycle, especially in this Meta with the popularity of defensive buildings. Having the Elixir lead with a Hog cycle deck is almost never, ever, ever important. Damage on your opponents tower is way better for you.

Also note that the Cannon and Barbarians are the hard counters to this deck. You have no Fireball or Poison to kill the Barbarians and Cannon is obviously always the hardest counter to Hog. Bowler is also a counter but it’s much easier to out-cycle, same goes with Inferno Tower. But if you’re having trouble out-cycling these cards, there’s an easy way to counter them.

Against Bowler, you place your Ice Golem at the river, then the Hog in the middle, and place Minions (or even better Electro Wizard, only if they don’t have Fireball) behind your Ice Golem. The Minions’ high DPS will quickly demolish the Bowler. If you decide to use the Electro Wizard its stun effect will constantly interrupt the Bowler’s already slow attack speed by 30%.

If you are new to Hog cycle or haven’t played it before, I recommend you try a little bit more expensive Hog control deck (3.3 – 3.6). Then you can move down the average cost to 2.9 – 3.1. When you feel comfortable playing that you can try this deck. If played well you should be able to reach 8-10 wins in Grand Challenge. You might even get to 12 wins if you are crazy good.

This deck is mostly made for Challenges because I use Electro Wizard in the deck but if you have an Electro Wizard which is high enough level to play on the ladder, go ahead and try this deck. If you want to use this deck on ladder but your Electro Wizard is not high level enough you can try replacing him with Musketeer.

If your opponent places an expensive troop in the back, like a Golem or P.E.K.K.A, always, I mean always rush the other lane with Hog + Minions + Ice Spirit (or something similar). This will force them to split up their Elixir, not allowing them to support them tank as well, if at all. Then you can easily defend their tank with Cannon + Skeletons.

That’s it for my guide. Hope you all have a great day and clash on!