February – April 2018 might be the best meta Clash Royale has ever seen. Affectionately known as “The Long Meta”, this period saw several viable archetypes and significant diversity within the archetypes as well. Ultimately this time of peace was disrupted by Rascals which were overpowered on release and the compensatory Valkyrie buff which just made for two broken cards rather than one. As Electro Dragon has demonstrated more recently, one broken card is enough to completely warp the meta, but things went from bad to worse when Tesla was nerfed in August. The 10% dps nerf (hit speed 1.0 => 1.1) would have been enough to kill most cards, but the 5 second lifetime reduction was the nail in the coffin. This nerf came primarily in response to Xbow, Log-bait, and Miner Poison Tesla decks – all of which were strong in the meta at the time. However, it should be noted that these decks relied heavily on Valkyrie as well, a card which was clearly overpowered and played consistently in every major archetype.

The Supercell balance team has a very difficult job, and it is by no means easy to change a card just the right amount. Unfortunately, in this particular case, the Tesla nerf had subtle and far reaching consequences that the meta is yet to recover from. To get a sense of the impact of this change consider the following chart showing matchups between deck archetypes:

First a little explanation: this chart is meant to show matchup relationships between broad groups of decks. An arrow from deck A to deck B indicate that A usually has a favorable matchup against B, a dotted line indicates that sometimes A is favored and sometimes B is favored depending upon the specific decks within the archetype. Many decks fit into multiple matchups and there are certainly exceptions to the counter relationships above, but I think this chart is helpful for understanding the ecosystem of Clash Royale archetypes more generally. This is not meant to be an exhaustive list and this sort of archetype analysis deserves a post of its own, but here’s a quick summary of the archetypes shown above:

Beatdown (Golem, Lava Hound, Giant) – Good against siege and chip decks but their pushes are easy to punish and counter-push.

Three Musketeers – I’m not counting this as a beatdown deck because its matchup chart is significantly different. 3M decks are harder to counter-push than normal beatdown decks, but they struggle against defensive Mortars and Xbows as well as decks that cycle quickly back to Fireball.

Siege (Xbow, Mortar) – You know these two. They’re really good against chip decks and 3M but struggle against beatdown.

Chip (Miner, Goblin Barrel, Hog Rider) – These decks deal consistent damage and cycle quickly. This allows them to out-cycle the counters of heavier decks and get back to a Fireball for Three Musketeers. Because they use small pushes, they don’t give much for the opponent to punish or counter-push. However, they struggle to stop beatdown pushes and don’t have a big tank for siege decks.

Counter-push / Punish (Graveyard, Pekka, Mega Knight, Royal Giant, Bridge Spam) – These decks can either counter-push or punish a beatdown deck effectively but struggle against chip decks. They’re matchups against siege and 3M are very deck dependent. Counter-push, punish and chip decks have traditionally been lumped together as “control”.

Of the archetypes above, defensive buildings are not used in classic beatdown, 3M, or counter-push / punish. After all, buildings can’t cross the river behind a golem and they can’t be used to punish or counter-push. In siege decks, however they can effectively counter-push or punish by defending an Xbow or Mortar. In chip decks defensive damage buildings are critical to stopping a large assault from the opponent.

At the time of the Tesla nerf, all the viable siege and chip decks relied on Tesla to fill the damage building role including Xbow, Log-bait, and Miner Poison (Pekka Miner Poison is more of a counter-push / punish deck with chip elements and Mortar-bait and 2.6 Hog Cycle were not viable outside of the hands of a few masters at the top of ladder). The other defensive damage buildings, Inferno Tower, Bomb Tower, and Cannon were not viable and have not been for a long time.

This meant that the Tesla nerf effectively killed 2 of the 5 archetypes. With siege and chip removed, the chart from above now looks like this:

Not only does this chart leave fewer options for competitive players, it results in a counter-push / punish archetype with few bad matchups and in turn makes beatdown much less prevalent. The result is a meta dominated by counter-push / punish decks and Three Musketeers, first with Splashyard and 3M Royal Hogs in September and October, and now with Pekka Bridge Spam, classic 3M and 3M Barbarian Hut in November. The death of defensive buildings also aided the rise of Royal Hogs and Battle Ram, which helps these two archetypes especially. Furthermore, by reducing the number of viable archetypes, the number of viable decks within the archetypes is also reduced. Royal Giant and Mega Knight are both natural deck defining counter-push cards, but they can’t survive in the current Pekka dominated meta – which just makes Pekka more popular. Giant, which matches up even more poorly with counter-push decks than golem is nowhere to be seen, and the rising 3M deck is a slow, grindy, Barbarian Hut variation because at least that can stop a battle ram. Likewise, the hyper defensive Barb Hut “no win condition” deck popular last meta would not have been possible if quick cycling Miner and Goblin Barrel decks were anywhere to be seen.

As a beatdown player, I know how frustrating it can be to go up against defensive buildings, but the decks which need them help keep Pekka, Splashyard, and 3M at bay. Ironically, a meta without defensive buildings is even more slow, grindy, defensive, and difficult for beatdown players, not to mention how tough it is for the archetypes who need those buildings themselves. Now 3M players fear that their win condition will be nerfed and maybe Battle Ram too, but will this even help? Maybe a balanced and diverse meta will emerge from those changes, but I seriously doubt it. The Clash Royale ecosystem is incredibly chaotic, and any given change is likely to have negative side effects. Nerfing the current powerhouses (besides Edrag, nerf that thing please) will probably lead to a different pair of decks becoming dominant, but it likely won’t bring back chip and siege or fix the underlying problem. Therefore I implore the Clash Royale balance team to save defensive buildings and restore order to the competitive Clash Royale universe.

The most important change is to buff Tesla. I recommend giving the card back it’s lifetime as this was the hardest part of the nerf to assess in terms of impact. I also think that the card should receive a damage buff of 8-10% to bring it close to its previous dps. Leaving the hit speed alone will ensure that the card still one shots minions and will allow for easier balance adjustments in the future.

As for the other damage buildings, the Inferno Tower buff was a good start, but it’s hard to assess its power in a meta dominated by Electro Dragon and Lightning. I would consider reworking Bomb Tower so that it hits air, and maybe has a Executioner-like splash radius to hit more of a beatdown push. Cannon also deserves some love, but the team is right to be wary of buffing the card due to its importance to 2.6 Hog Cycle, which is a hard deck to balance and can already be stifling in the hands of a master. Finally I would give archers that buff. It will help 2.9 Xbow and could also be useful in other cheap cycle decks that put low elixir costs at a premium, who knows, maybe it will even help mortar cycle.

Again I want emphasize this is not meant to be an indictment of the balance team, I just care about Clash Royale and want it to be the best game it can be. Thank you for reading and if you can upvote this post or otherwise help it reach Supercell’s attention please do! 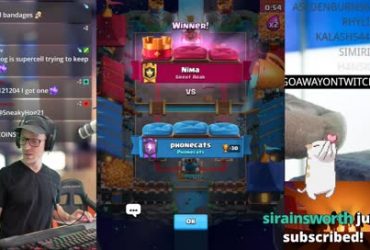