Hi, it’s Easy Tiger, and this is my first deck guide. I started using this deck at around 2000 trophies and it has got me to Jungle Arena. I’ve never seen a deck like it.

If you use Balloon, you will know that if your opponent has Minion Horde, it is very hard to get the Balloon to the tower, which makes it incredibly hard to get all the damage you need to take towers. Luckily, this deck contains plenty of air targeting splash damage troops to escort your balloon to the wonderful world of tower killing. I have put in card substitutions just in case you either don’t have a card or simply don’t like playing it.

This easy-to-use, 3.1 elixir, off-meta deck has been very successful for me, I hope it is for you. Enjoy! 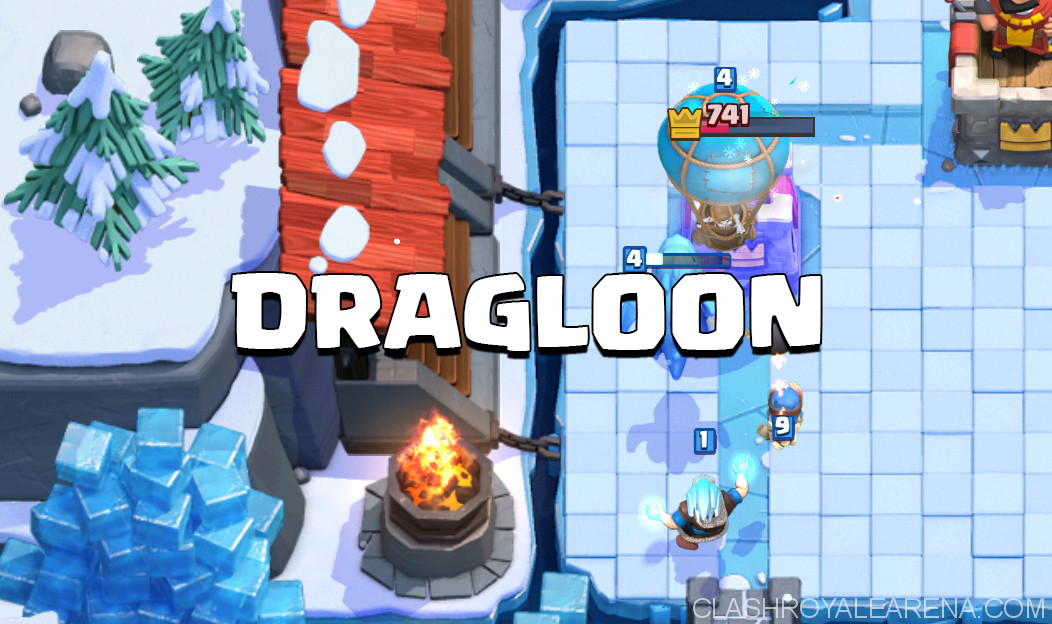 Balloon – this is the heart and soul of the deck. Its incredibly high damage makes it one of the best tower killers in the game. The death damage of about 200 (which can kill a badly placed Minion Horde) and the fact that it is an air troop just makes it even better. When playing the balloon NEVER send it off on its own, as it will be easily countered. Always couple it with Ice Wizard, Baby Dragon or Spear Goblins and have Zap at the ready. Also, try to place right on the edge of the arena so that there is a higher chance you will be able to bypass buildings.

Baby Dragon – A very popular card in low arenas, but when you get to around Spell Valley, Builder’s Workshop and Royal Arena, you stop seeing it as people start to use thing like Minion Horde and Mega Minion. I still believe it is very good, particularly as it is the ONLY splash damage flying troop. It is a kind of all-rounder – very good on defense for dealing with swarms and can act as a mini-tank for any of your troops when attacking.

Ice Wizard – The first legendary of the deck and, like the baby dragon, very versatile. In my opinion, he is the best support troop in the game, because he slows things down (ALL HAIL THE ANTI-RAGE), which means your push can last longer, and his decent health which allows him to survive Fireballs. If paired with almost any card, the results can be devastating for your opponent if they ignore it.

Zap – Do you seriously need me to explain this?

Skeleton Army – The Skeleton Army is a must-have for all decks – one of the best cards in the game for countering, particularly since the price was reduced to 3 elixir (from 4 elixir). NEVER place a skeleton army at the bridge unless your opponent has just massively over-committed and you are confident they won’t have anything cheap enough ready to counter it. Also good if you want to bait out arrows or log so they can’t counter your Princess.

Substitutions – Guards (not recommended, but OK if you want your deck to be stronger on the offensive), Tombstone (if you want a building)

Princess – Like the Ice Wizard, she is extremely versatile. On defense, you can place her behind your towers and she can help shut down weak pushes with a lot of swarms, while on the attack, she can shoot her flaming Arrows without being hit by the tower which makes up for her low health. If placed correctly, you can force your opponent to make awkward moves, or take hundreds of health off their towers. You have two placement options – in the opposite lane to the push if you want to get OK damage on each tower or in the same lane as the push for devastating damage on one tower.

Bomber – Bomber is a very good card, so it’s a shame that the usage is very low in high arenas. With the bomber, you are trading health for excellent splash damage. A very good card for “What should I do, I don’t have anything to counter that” moments, as you can place it behind your tower and it will do very good damage to attacking troops. It’s also one of the best counters to mass swarm decks because of its good area of effect.

Spear Goblins – Unlike the Bomber, they still see quite a bit of action in the higher arenas. Even though they have low health and damage, if left alone they can get about 150-200 chip damage on a tower. They also help against Skeleton Army bait decks as there are three of them. Their low elixir also means that they are good at cycling.

When the game starts, don’t play anything. Wait for your opponent to make a move then (you guessed it) counter it and turn it into a push by adding 1 or 2 more troops. Always try to have at least 3 elixir so you can counter things quickly.

Keep playing like this until double elixir, where you will be able to cycle quickly and get in a few Balloon + Baby Dragon + Ice Wizard pushes. When doing these pushes it is also good to have a zap to hand. If you can get these pushes back-to-back, your opponent will have an incredibly hard time defending their towers.

Some good mini pushes are: (Princess is good to back these up)

I hope this guide helps you, like me, get to Jungle (or even Legendary) arena.