Hello clashers! This is KairosTime coming out with a deck guide on my famous All Skeleton Rocket Siege Deck! I made this deck while messing with my clan mates, and it evolved into a powerful deck that will frequently get your opponent to play the “Wow, Well played!” emotes at the end of a match. This deck is a real laugh once you learn how to make it successful! 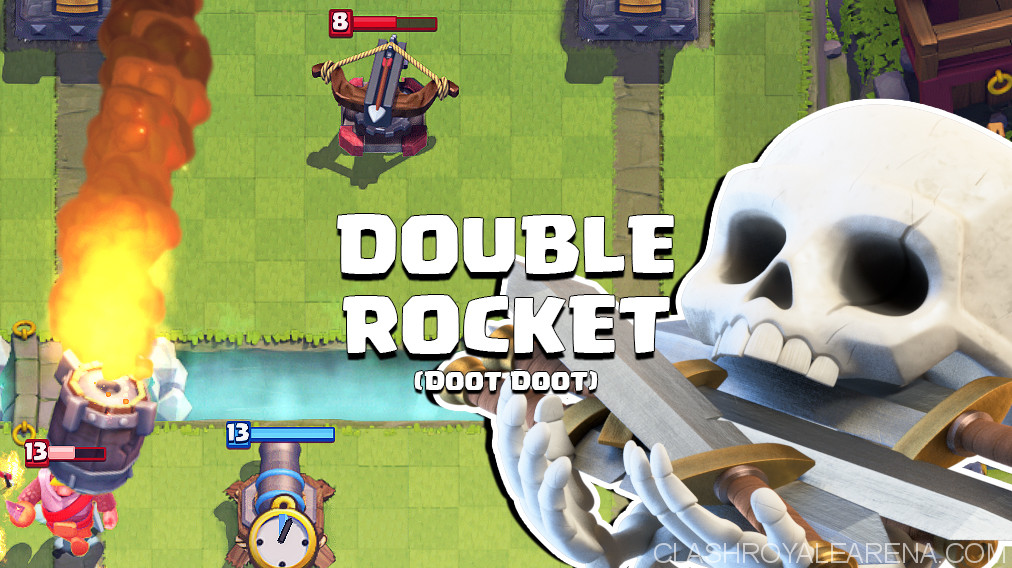 Rocket – Your primary win condition is to land this powerful explosive on your opponent’s tower, but you don’t want to play it unless you have a massive elixir lead on your opponent, or if your opponent has a supportive troop close enough to the tower to deal tons of damage to both. I usually won’t Rocket anything close to the tower that costs less than 4 Elixir, except for the Mega Minion. This deck focuses on defense first, offense second, so be careful how you use it. It has the picture of a Skeleton painted on it, which is why I decided to include it in this Spooky doot deck! You’ll want to make your opponent commit to a lane before revealing that this is your win condition by letting them do a little damage on your tower. Just don’t let them take too much before setting up your defenses.

Mirror – The mirror is your secret weapon, and you don’t want to reveal that you have it until it is too late for your opponent! Because the Rocket deals about 500 damage to towers, players completely change their playstyle when their tower falls below 500 health so that it’ll be difficult for you to finish them off. The Mirror helps you overcome this by allowing you to Double Rocket a tower when it has 1000 health remaining. This will only be possible with powerful defenses, which is where the other cards come into play.

Bomb Tower – This Skeleton Bomber on a tower will make quick work of swarms of troops. Not only that, it has a TON of health, which allows you to use it as a tank if needed. If your opponent is playing a Lava Hound deck, this is a great card to use as a distraction, and it’ll clear ground troops, so your other troops can focus on the air troops. Alone, it’ll stop nearly all Hog Pushes because it has so much health.

Tombstone – Now a really common card, the tombstone does an amazing job at preventing damage on your tower. For a super strong defense, place the Tombstone 1-2 tiles in front of your King’s tower, and the Bomb Tower in front of it to act like a tank. The Tombstone is a great distraction card because it’ll add a constant stream of distracting Skeletons for your opponent to deal with.

Witch – The only anti-air Skeleton themed card. This means that if your opponent has a lot of air troops, you will want to be extremely careful about how you play her. One of the best things you can do is play her behind your King’s tower so she will have maximum spawning time. By playing her like this, you’re adding another powerful defense to your deck, which will make it easier for you to save up elixir for your Rocket.

Skeleton Army – With it’s recent buff, the Skeleton Army is a very defensive card, and if your opponent wastes a spell to clear the skeletons spawned by the Tombstone and the Witch, you can even use the Skeleton Army as a surprise defense or offense. Adding this card into the deck allows for another cheap way to defend against a lot of pushes.

Guards – The Guards counter nearly every card in the game, which makes these bony brothers an amazing addition to your defensive deck. The fact that they don’t get completely shut down by the Log makes them an obvious choice to use right now. Use them to counter supporting troops behind tankier offenses.

Skeletons – No d00t deck would be complete without the 1 elixir Skeletons! The Skeletons play an important role in helping you cycle your cards if you need to, but they can also be used to apply defensive pressure if your opponent has cleared your army of Skeletons with some sort of a spell. Their value is mostly in distraction, but they do enough damage to warrant staying in the deck.

Here is a video guide with some actual gameplay using this deck:

This deck is hilarious and will give your clan-mates and opponents a good laugh. In case you’re interested on how to make a good Rocket Siege deck that doesn’t use the Skeleton Theme, I’ll be coming out with a guide on how to build a successful Rocket Siege deck with in-depth instructions on how to play Rocket Siege, so stay tuned!