Hello again CRA, this is Victorapple with my fifth exciting off-meta deck!

I’m here to introduce to you a unique deck centered around the Inferno Dragon, along with another uncommonly used card these days: Poison!

This deck is a Beatdown/Chip deck. Its cheap cost of only 3.3, with no cards higher than 4 elixir, allows for a fast Chip playstyle, or a build-up of a big and powerful Beatdown push. For an explanation of deck archetypes, take a look at here. 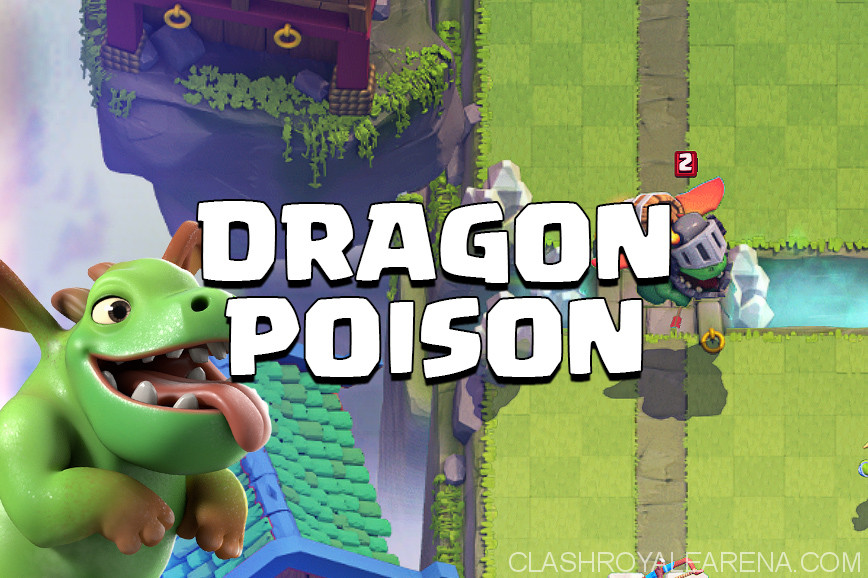 Just a quick comparison between this guy and his counterpart, Inferno Tower. Both deal single target damage that ramps up overtime, shredding even the toughest tanks. Inferno Tower has more hitpoints, more damage, higher range, and can pull building target troops. Inferno Dragon, on the other hand, is flying, moveable, actually able to retarget faster, and has a cheaper elixir cost. Obviously, Inferno Tower is a much better choice for defense, but Inferno Dragon provides more flexibility as it can also become a power offensive win-condition!

For the most of the game, this guy is your go-to defender for shredding tanks like Lava Hound or Golem.

He can be Zapped, or even killed with a high-level Lightning, so be careful. From there you can reinforce him with your other cards to get him to reach your opponents tower, for a devastating counterpush!

Baby Dragon: The other half of the Double Dragon push. Obviously, the first half is Inferno Dragon. Another mean, green flying Troop, but instead of high single-target damage, he dishes out splash damage fire barf!

He synergies well with the Inferno Dragon, helping Inferno Dragon by removing swarm troops and also providing as a secondary tank.

Baby Dragon can be replaced for Wizard, but I stay with Baby Dragon because it is cheaper and beefier. Also you can’t have a Double Dragon Combo if both cards aren’t Dragons.

Ice Golem: Ice Golem serves many roles in this deck. Classic examples are as a tank, kiter, support cutter, and Skeleton killer.

Ice Golem is one of two tanks for your Dragons in this deck. The benefits are Ice Golem is very cheap, only 2 Elixir. Second, Ice Golems death damage will also be beneficial with helping out your Inferno Dragon. Not only that, with Poison, it temporarily forms the same effects Poison had before it got nerfed, helping to control an area even further.

On defensive, you can use him to kite/distract Elite Barbarians, Princes, and Mini-P.E.K.K.A. Or you can use him to distract supporting Troops like Musketeer while your Inferno Dragon takes down the tank. Also helps take out swarms.

I wouldn’t recommend switching this card out for another Mini-Tank like Knight because its strength comes from its utility upon death.

Miner: The second Legendary of this deck, as well as the second tanker for your Dragons!

Obviously, Miner is the more aggressive tank, while Ice Golem is a passive utility tank.

What I do is send an Ice Golem to tank first, then follow up with a Miner to deal some damage on the Tower or take out Princesses. Once Ice Golem Pops, Miner is there to continue tanking for your dragons.

Miner is also helpful for chipping, as well as taking out Elixir Collectors.

If you don’t have the Miner, Knight can be substituted, but you lose the offensive potential you get with Miner.

Poison: Now we move on to some of the supporting cards.

Now, why Poison versus its counterpart Fireball? Supercell tried to justify the Poison nerf as “Poisons ‘thing’ was always damage over time”. Even without the slow, Poison helps fit in and support this deck.

Placing this card down with your Double Dragon push helps tremendously, as for 10 seconds a target area is under constant damage. This means putting down swarm troops to distract Inferno Dragon down in this area is extra risky for your opponent!

With other cards, it will be hard for your opponent to stop Inferno Dragon successfully, allowing you to pull off major damage or even take down the tower.

It doesn’t do instant damage, so its usage is slightly different than Fireball. It can still take down big pushes like Fireball, but you need to place it so that troops will stay in the area as long as possible. Add other troops like Ice Golem to ensure they stay in the area.

Poison also does a better job of dealing with Furnaces, Elixir Collectors, and Goblin Huts than Fireball.

The constant Skeletons also provide some small support in your pushes. You can even threaten to deal serious chip damage if you play a Miner to tank for some of the skeletons, for an extremely cheap push.

This can be switched for Skeleton Army, but then you lose the power of diverting attentions of Hog Riders, Lava Hounds, and such.

Tombstone is also more Zap and Log-proof than Skeleton Army.

Great for taking out backline support troops, also a quick counter to Hog Riders and Miners.

You can support this card with Fire-Spirits, Ice Golem, or Miner for a quick semi-decent counterpush.

Offensively, he helps support your Double Dragon push by taking out dangerous troops like Musketeer, defensive buildings, or beefy distractions like Ice Golem or Knight. Especially taking out Electro Wizard, the bane of Inferno Dragon.

Can be subbed for Mega Minion, but Mini-P.E.K.K.A has higher damage, more hit-points, and being a ground troop, can also pull Elite Barbarians or Valkyries to the center.

Great for taking out Minion Hordes, Barbarians, and Elite Barbarians. Also takes out Musketeers and Wizards at the bridge if placed correctly as a quick distraction. Its offensive capabilities are for supporting your Double Dragon pushes in taking out swarm troops, or supporting Mini-Pekka or Miner. Defense, it prevents damage to your tower from lone Mini-P.E.K.K.As or Mega Minions as quick distractions. Tombstone/Ice Golem + Fire Spirits also takes out Elite Barbarians quite nicely.

What you want to do is make positive elixir trades, and either counterpush by doing a quick, cheap Chip or a full-out beatdown push to overwhelm your opponent.

Cycle through your cards using Tombstone, Ice Golem, or Fire Spirits, but always make sure to have something ready to counter whatever your opponent places down.

Mini-P.E.K.K.A, Inferno Dragon, and Baby Dragon should not be placed down to cycle.

Poison can be used to take out Elixir Collectors or Huts, only use it to hurt other toss-out Troops like Ice Wizard if it can hit another building like Elixir Collector as well.

Miner also helps with dealing some quick Chip or taking out Pumps.

If you made a small positive elixir trade, for example, stopping Minion Horde + Miner with Baby Dragon + Mini P.E.K.K.A, you can opt for a quick counterpush, such as supporting the previous example with Fire Spirits and Miner/Ice Golem. OR you an opt just to let them be, forcing your opponent to use up some more Elixir to stop those troops.

You no longer need to wait for positive elixir trades to build up big pushes.

Build up big pushes when at Max Elixir or quickly supporting your surviving defending troops for a push. I’ll explain some of the pushes you can do with this deck later.

Your main win-condition is Inferno Dragon, but if it can’t deal enough damage to the tower, constant Miner+Poison chipping should take down weakened towers.

This deck will become slightly weak after taking down one tower, due to the activation of King Tower, but good playing makes it possible even to get 3 crowns.

Here are some quick Chipping Combos to do Pre-Double Elixir; these are for quick counterpushes with a slight elixir advantage:

Fire Spirits: Just toss these guys out to cycle. lol.

Miner: Toss this guy to do some chip damage, but only to cycle.

Baby Dragon+ Miner: Baby Dragon comes from a successful defense, don’t just place this Combo down for the heck of it, otherwise its 7 elixir. Miner tanks for Baby Dragon, forcing your opponent to defend or risk serious damage. Miner helps support the Baby Dragon for a quick counterpush.

4 Skeletons from Exploding Tombstone + Miner: Doesn’t seem that big of a threat, but it is if not dealt with.

Ice Golem/Miner + Fire Spirits + Mini P.E.K.K.A: See above, another quick counterpush just with another unit tanking for Mini-P.E.K.K.A. Ice Golem usually doesn’t survive in a defense, and Miner is usually a surviving troop from defense because it isn’t used defensively most of the time.

Here are some semi-powerful Beatdown Combos to do Pre-Double Elixir; these are for big counterpushes with a great elixir advantage:

Baby Dragon + Inferno Dragon + Ice Golem/Miner: A 10/11 Elixir combo to pull off for a less Chip Oriented push to a more Beatdown Oriented push. Baby Dragon and/or Inferno Dragon should come from a successful defense. Will be hard to stop if opponent doesn’t have counters ready or low elixir. Remember to always place troops off to the far sides, so that they are less able to be kited by ground troops like Ice Golem.

Inferno Dragon + Fire Spirits + Poison + Ice Golem/Miner: This is for when Inferno Dragon survives a counter push, and Baby Dragon is not up in rotation. Fire Spirits helps cover some splash and so does Poison. Poison also works great at taking down troops placed to counter Miner, namely Skeleton Army or Archers.

Just pretty much the same combos as Pre-Double Elixir, just add in other things to support the Chip. Support with Fire Spirits, Ice Golem or Poison.

This is the main combo you will want to try to pull off in Double Elixir.

This appears as if its almost half your entire deck, and it is.  A devastating 17 elixir push, not including Fire Spirits or Mini P.E.K.K.A, but can be achieved through a slow build-up push. Here is how you will want to format it. Ice Golem tanks first, Baby Dragon close behind, with Inferno Dragon behind Baby Dragon. If Mini P.E.K.K.A is included, put it behind Ice Golem. Fire Spirits can be anywhere. While Ice Golem tanks, place Miner to start chipping at tower, providing as an additional tank. Poison is used in an area of your choice, preferably damaging all defending troops, buildings, as well as providing coverage over areas where opponents may be likely to place counters.

I do not list any defensive combos, as it is easy to figure out what counters what in this deck.

Stuff to Watch out For:

It may feel awkward at first using the Inferno Dragon.

Many times I feel as if the Inferno Dragon moves too slow, or doesn’t have enough hit-points at all. But with patience, and when played right, this deck is guaranteed to surprise your opponent.

Thank you all for bearing through with me, and see you in the Arena! As always, modify cards and swap them based on your needs. 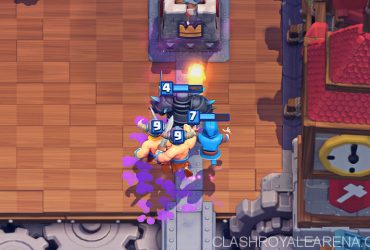 Hey there! Kariminal HD here with my second ever guide on Clash Royale Arena, the Elite P.E.K.K.A Double Wizard Deck! Last time I made my previous guide I read the … 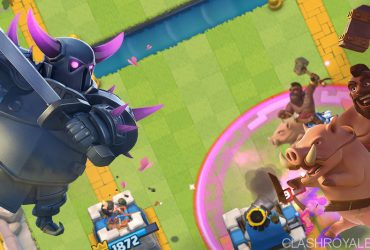 This is a low-cost deck that I have found to be pretty effective for my personal style of play. The average cost for this deck after the recent updates is …