Hey! guys, it’s the Green Arrow.
Today I will show an amazing and extremely powerful elite barbarians deck with lumberjack and wizard combo.
This deck is one of the strongest deck I have seen or made. This can be used superbly as offensive and also in defence. From the frozen arena, I got to the Hog mountain with this awesome deck. Come on guys, it’s About 800 trophies push. With this deck I completely legendary challenge without any loss. So without further ado, let’s see the Deck. 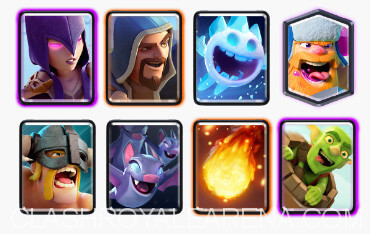 Elite barbarians: After they got released, Elite barbarians have dominated the clash arena. They are the main win condition for our deck. Their speed and damage per second make them nightmare for the enemy. They are mostly used as offensively but for pekka or golem, ice spirit and Elite barbs can broke enemies best tanks.

With elite barbs as a mini tank and start packing if it can make a deadly combo it can take out all the swarms and as well as Tower down.

Lumberjack: Even if the elite barbarians however Main win condition, the lumberjack and Wizard or witch combo can also be used to the surprising opponent and also to cycle through.

Wizard: Nowadays deck is always incomplete without splash damage troops what is best Splash damage troop instead of wizard. The wizard behind the elite Barbarian is the main win condition in our deck. Wizard is best to defend against the swarm.

Goblin barrel: Goblin barrel is the semi win condition and it is also mainly used to distract opponent from your main attack.

Even after the balance update their hitpoints damage may have been decreased but they still can cause a great amount of damage is on the towers.

Bats: Is there deck can be made cycle-able without the bats. Bats are the perfect example of the “small package and the use damage” Troops.

They can cause huge damage in a small amount of time due to their incredible speed.

Ice spirit: Ice spirit is generally in the Deck for the cycling for the elite Barbarians or lumberjack, but it also can be used to counter the troops of the enemies.

The general gameplan for deck is to reserve and suprise the opponent by unexpected use of elite barbarians. So the later, the better.

Starting moves for this deck:

Key is that starting with wizard front of king tower. Then tank it with Lumberjack and let it take chunk of tower’s hp.

Then after he dies , use bats or goblin barrel on tower. So, while is busy getting damage from raged wiz, bats or goblin make sure that tower is demolished.

You can use witch instead of wizard but for huge damage I suggest use wiz.

With an ice spirit this combo becomes in destructible with minimum 1 princess tower and half hour of king tower.

This combo also helps to cause huge damage. The elite barbs take on tower while witch clears out path for them.

This combo is not sure win combo. But I usually observe that people defend against elite barbarians with wizard or minion horde. So it is necessary to take them out on haste.

So a prediction fireball is the thing that never fails when it’s about elite barbarians.

In this each card has a own importance for making this deck whole but for some cards which are low leveled some substitution are as:

As we use witch generally for defence with an counter push, I think Ewiz is best alternative against it.

3) Spear gobs/ gobs instead of bats:

Bat are in deck for its speed and positive elixir trade. Thier position in this deck is kind of immovable but I think spear gobs or normal goblins can replace it. They can huge damage to tower when they are raged by our combo as I have mentioned in earlier. (Combo-1)

So using this deck requires patience and some practice.

But when you learn how to use this deck , I assure you that this will the best deck you have ever seen.

So guys, that’s it for today.

See you again with another deck. Till then, happy clashing.