Hey, Nitrome95 here, and I’m so sorry for not posting in a while, I have been busy with school midterm studying. However, I decided that I needed a bit of break so I wanted to write this article (IKR, I’m such a nerd for writing articles for fun XD). So here it is, a half troll, half chip control deck that will definitely make your opponent feeling a bit salty after the match. 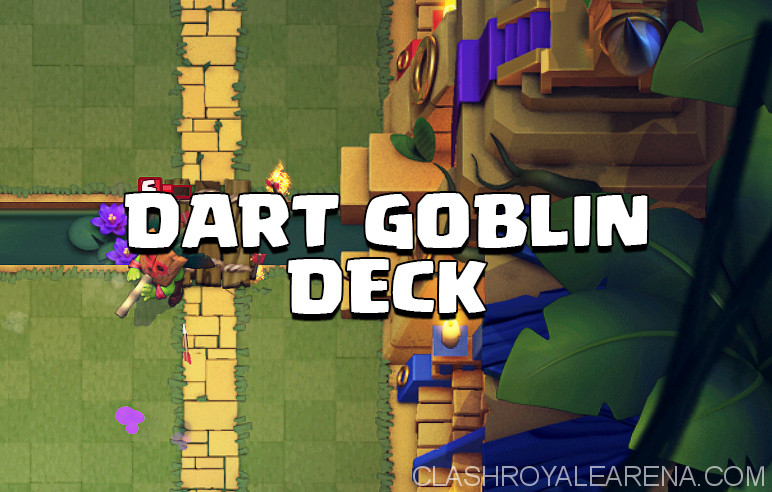 For 3 elixir, this guy is a beast who deserves to be in A- tier on the tier list. Great on defense to offer high point damage while being able to stay safely away from harm. He deals enormous amounts of chip damage regardless of the amount of hp he has, and is devastating with a tank. Really easy to get him to the tower with his fast move speed and long range.

For 3 elixir, this gal is so versatile that I’m surprised she isn’t in the meta. She gets guaranteed tower damage, causing your opponent to make awkward plays or else suffer hundreds of tower damage. On defense, she is similar to the dart goblin except she is used for splash defense.

Just don’t be stupid with your zap.

ANOTHER annoying chip card. Place this guy down and watch as your opponent makes awkward plays to defend against it. Furnace is also great at pulling defensive targeting troops. In desperate situations, the furnace is great at taking down minion hordes. If you are having trouble facing tank decks or you want to play this almost like a bait deck, use the inferno.

Yup, another chip card (you guys are starting to get the theme, right?). Use it for chip damage and to tank for your other troops. Can be used on defense to take out princesses.

Your secondary tank for your troops. Use the frost nova to take down skarmy, minion horde (with zap). You can spank with this card against support units. Spanking is where you use a tank to absorb dps of support troops so that your high dps glass cannons can take the opponent’s troops down.

These guys are so good in the meta now. You can use these to spank with the ice golem, take out graveyard, or use offense with miner. Just be careful against splash damage. Wherever they are, they deal devastating amounts of damage. Can be replaced for minion horde if you want to play this more like a bait deck.

What else is there to say about the card? If all else fails, miner fireball will eventually take down the tower. Used against medium sized troops too. If you are into rocket miner, you could substitute for rocket but it changes the whole playstyle of the deck.

As I mentioned before, this deck is about doing two things:

So now about chipping without overextending. As I have mentioned in several of my guides: DON’T GET GREEDY. It is sometimes tempting to fireball a musketeer to get tower damage, but DON’T. This deck can easily get overwhelmed by a big push, so you shouldn’t be making those plays unless you have a huge elixir lead. Instead, make your opponent do awkward plays so that they will never be able to form a strong push.

Your standard defense will usually be furnace to pull the tank, dart goblin or princess against the wall to take out support. If needed, you can use a minion ice golem spank to help on support troops, or use both the princess and dart goblin for point and splash damage. IF so, make sure you spread out your defenses. Your troops are delicate and can easily be logged, arrowed, or fireballed.

As I mentioned before, you have to put your opponent in bad rotations so that their pushes are weaker.

Generally, you will want to make makeshift pushes depending on your hand and your need. Here’s some examples.

Keep in mind that any of the pushes, except the second to last one, can use Ice Golem .

Graveyard – 65% win rate. Dart goblin, princess, and ice golems are all ok counters, but not the best. Usually, you will have to pair one of these with zap. Just don’t let your opponent’s bowler plow through your delicate troops.

Hog Cycle/ Control – 85% win rate. Since dart goblin and princess have such long range, your opponent will not get much value out of a prediction fireball. Outchip your opponent in these matches and make sure you always have a furnace on the field.

Giant Beatdown/ Heavy Beatdown – 40% win rate. You can not allow your opponent to build up a big push or else you will definitely be overwhelmed. Miner against pumps works well to prevent elixir from building up.

Balloon Ice Golem – 60% win rate. You have a lot of tools to take down the balloon, such as princess, minions, and dart goblin. Make sure that your troops are safe from the death bomb radius.

Siege- 90% win rate. Such an easy matchup with this deck. Watch as your dart goblin easily chews at the xbow while your ice golem tanks. I have beaten much better players than me using siege because dart goblin is so good at anti-siege.

So what have we learned? Keep up the pressure and you can beat any deck. I will probably be extremely busy with midterms, so expect a big guide when I come back…the suspense….