Wassup guys! Dank/Dark Prince here with another deck guide. This one is an old deck type, but fun and well, mine. It’s Dark Prince + Ram bridge spam. In other words, it’s very annoying but very fun. Now let’s get into the guide. 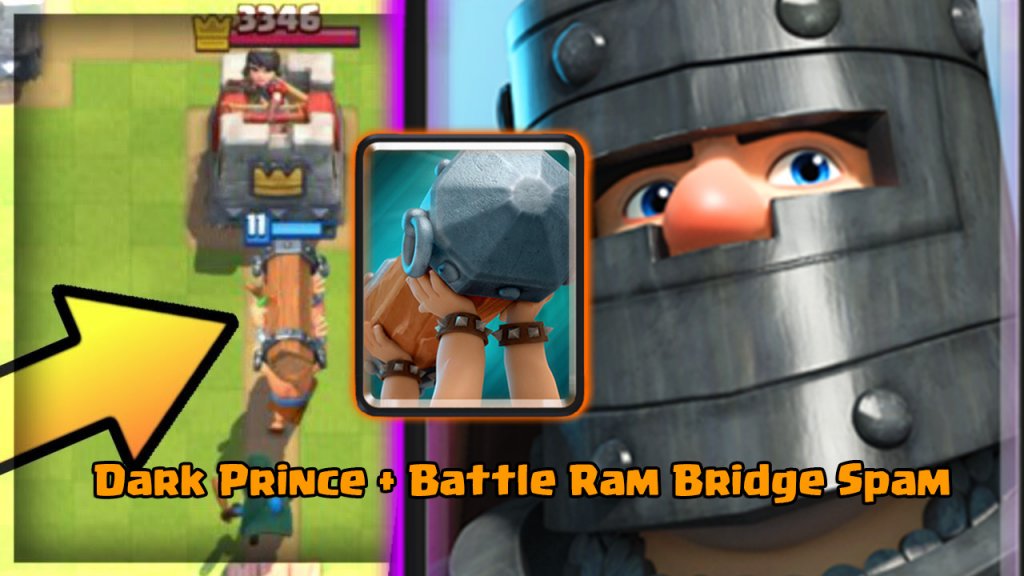 Battle Ram: This is one of your offensive cards and an emergency defense. Since it only costs 4 elixirs it’s easy to pair up with any other card in the deck for either quick jabs at the opponent’s tower, or if done right, it’s easy to use the 2 barbarians under the Ram to defend your tower.

Dark Prince: Defense/Offense, plus the dankest card in the game. Its splash damage makes it perfect for defense, and charging damage makes it good on offense. Pairing it with Battle Ram to protect it is almost always a guaranteed tower unless they have some card like Pekka. It’s up to you how and when you use it though.

Bandit: Dashing through the grass, taking out troops in the way, here comes Bandit ready to save the day! Bandit is another offense/defensive card. Like Ram and Dark Prince it has some type of special ability, which happens to be dashing! While dashing it can’t be hurt and does 160 more damage than if hitting normal(level 1). That’s a big increase and what makes this card special with correct placements it can easily take out troops attacking you, and on offense with or without some sort of tank it’s able to deal loads of damage if left alone.

Inferno Dragon: If there’s one main defensive troop in this deck, Inferno Dragon is it. It’s a moving Inferno Tower(building targeting troops don’t target it) but it deals loads of damage if they don’t have a counter for it. Beware of resetting troops/spells though…

Ice Golem: This card is purely for tanking and kiting in this deck, nothing more, nothing less. Well, I guess you could count the death effect for zapping minions as a use too

Ice Spirit: The perfect cycling card. Can be used for just about anything. And just look at that smile!

Zap: And a zappy zap here and a zappy zap there, zappy zap everywhere! Zap has so many uses in so many decks, but here’s the main use in this one. Swarms(especially in the air) can be problematic, get rid of them.

Giant: Generally an easy matchup, with Inferno Dragon to take out the Giant, and spells or cards like Dark Prince and Bandit for the support, you should have no problem defending or attacking against these decks.

Hog Rider: This matchup difficulty depends on the deck. A dashing bandit is good for defending a Hog, but not always. So I will just say, it can be easy to beat, or it can be hard. Depends on their cards.

Balloon: Well, just to keep me from getting murdered in the comments, this is a hard matchup. You have 1 thing for truly defending the balloon, and it takes time to kill it. Just keep pressuring them and hope you can beat them in the long run. Although, I haven’t lost to balloon yet…so, yeah.

Spell Bait: With this deck, spell bait is just something to laugh at. You have so many counters for whatever they throw at you, I don’t feel the need to explain what to do(not that I ever really do that).

Royal Giant: I generally find this matchup easy. They usually can’t defend all of your options for offense, and Inferno Dragon + Fireball usually takes care of RG + Support, if not Bandit or Dark Prince surely will.

Golem: Not a hard matchup, but not an easy one. Most golem decks have a lot of air support, and that can be problematic while using this deck. Versus those usually just make sure they can’t put golem down and defend you, so in other words, pressure them into oblivion…actually that goes for any golem deck. So done with this matchup.

Siege: AHAHAHAHAHAHA! All siege can hope for is a tie. It’s your easiest matchup by far. You have too much going on for them to be able to hit your tower and defend your pushes. All but 1 card in your deck(except spells) are on the ground and able to distract their siege card. Just don’t let them connect.

3:00-2:00: Learn their deck at first, and then just start wisely attacking their towers. Don’t overspend, but try not to let them push back.

2:00-1:00: This is when you can start with more troops per push. Don’t be afraid to make your opponent go home and cry, it’s actually better if you do. Double elixir is your friend.

1:00-End: Now you’re just being mean, I love it! Absolutely destroy them! You can even go into OT with this deck(unlike a lot of my previous ones) as long as you feel comfortable in making a little kid rage or cry then you should have no problem during this time. Hope you win, lol.

And that’s all for this guide folks! I’ve written a lot of guides these past few days, so I may or may not take a break. Also, give me cards you’d like me to make a deck and possibly guide(of the deck I make with those guides) from, it should be fun to do. Peace out! 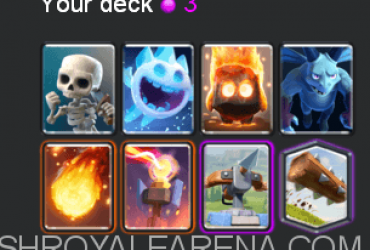 Hello everyone, Attack on Titan here, and here’s my first guide ever on CRA!I am proud to present my X-Bow cycle deck that brought me to arena 11. I had … 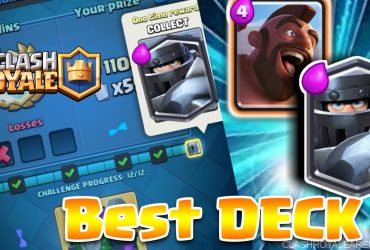 The Mega Knight is a pretty good card in higher arenas. A giant push? Destroy it with the Mega Knight. Squishy troops? Mega Knight will reign. But when it is …