What’s up guys, this is Eater of Hope here with my first guide on CR Arena. I’ll be talking about a control/beatdown deck I made a while ago. Its main purpose was for friendly battles, because all the cards were underleveled, but when I realized I was winning every Friendly Battle I did, I decided to upgrade my cards and try it out on the ladder. 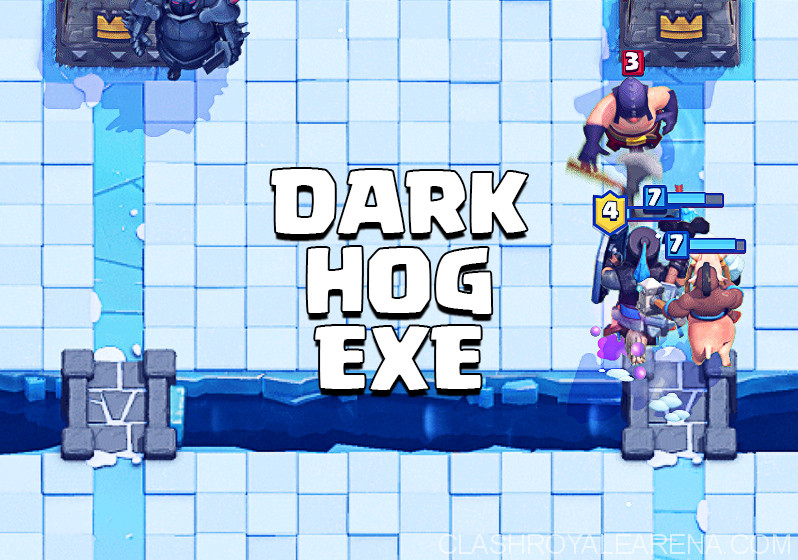 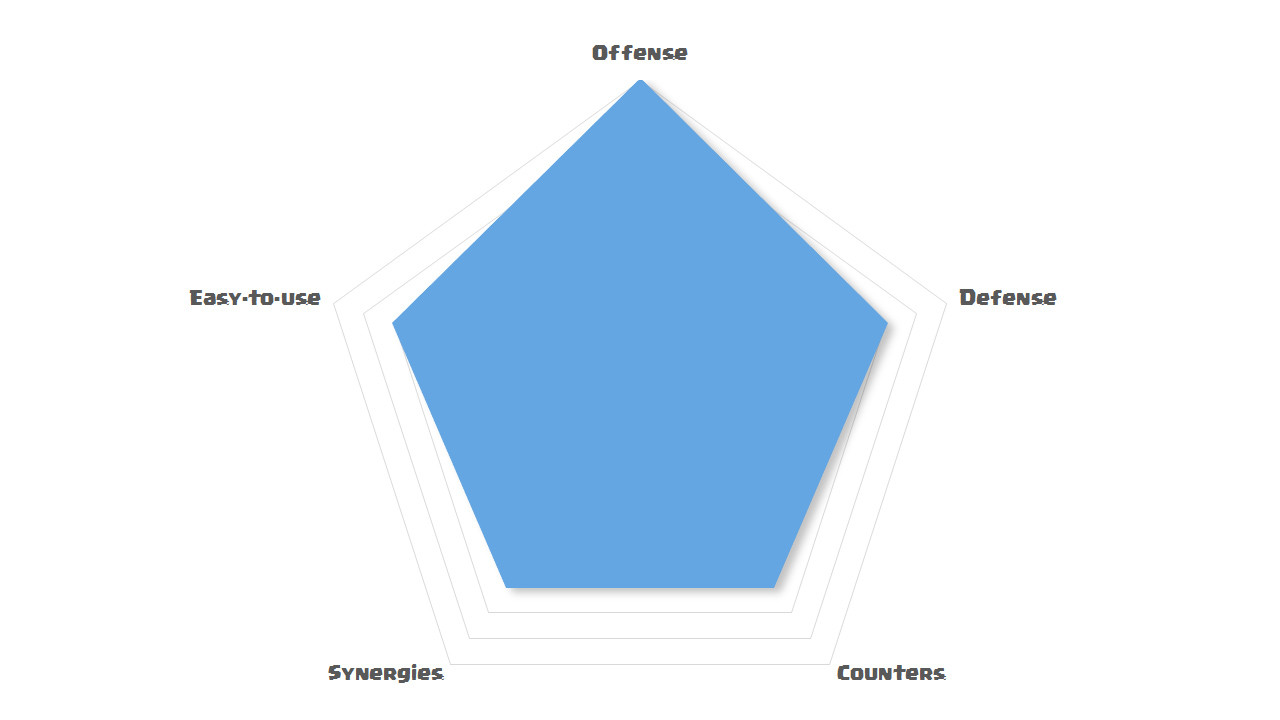 Hog Rider: Starting off is the Hog Rider. I’m a Hog user (he’s my highest level rare and he’s in all my decks), so he is one of my favorite cards. He’s fast, he has a decent amount of health, he does quite a bit of damage, he’s cheap, easy to level up, and he can jump over the river. No replacements for him, because he is your main win condition.

Dark Prince: Next we have the Dark Prince. He is a very versatile card, and can be used to attack, defend and push slower units forward. Because of his double health, he is immune to Rocket, Fireball and Sparky (unless his shield has already been knocked off), and can even make it to the Tower with a Minion Horde shredding his health. You can replace dark Prince with Valkyrie.

Bowler: Bowler and Executioner are your two main defense cards. Bowler’s knockback ability is unique, and it allows him to deal with E-barbs, Valk, Wizard, Musketeer and Knight easily. Also, Bowler can kill any supporting troops behind a tank heading for your Tower, allowing you to drop a Skarmy without fear. No replacements for Bowler, not even Wizard.

Executioner: Executioner is one of my favorite cards in the game. Use him to clean up a Graveyard, kill Minion Hordes, Skeleton Armies, Lava pups and support troops. But be careful, his attack speed is quite slow, and his ax takes a while to come back to him, so when you place him on defense, make sure he’s targeting the unit you want him to. No replacements for Executioner.

Princess: Princess is also useful on defense, and just as good on offense. Drop her at the bridge during the start of the game, and it will take a second or two for your opponent to counter her. This usually allows Princess to get two hits on the Tower before she is killed. If your Executioner is out of cycle, then you can also use her to kill swarm cards too big for your Tower to take out alone. You can replace Princess with Fire Spirits or Archers, but I wouldn’t recommend it.

The Log: The Log needs no introduction, use it to kill swarms, knock back Hog Riders or finish off glass cannons. You can use Tornado to replace The Log, but again, I wouldn’t recommend it.

Skeleton Army and Goblin Gang: Skeleton Army is your secondary swarm and Gang is your first. If you have a tank or a Prince coming for your Tower, use a Bowler to kill the support troops, and then drop a Gang. Two things could happen, the Gang will either get Zapped/Logged/Arrowed, or it will take out the tank. If your Gang does get zapped/logged/arrowed, no worries! Just place your Skarmy to finish the job.

When attacking, you want to maintain constant pressure, keeping your opponent over-countering your pushes and crying when you destroy his Tower.

At the start of the game, my first move is usually to drop a Princess directly on the bridge. Unless your opponent also places something there at the same time, the Princess should get at least two hits off the Tower before getting killed.

Your starting hand may not include Princess, but that’s okay. Starting with an Executioner at the back is good too, but you’ll wanna save your Bowler for E-barbs.

If your opponent starts a big push on the other side, make sure you feel confident on defense and then push on his other Tower. This will force him to use his Elixir to counter your push instead of fueling his.

Here are a few screenshots of my attack Log so you can see how successful I’ve been with this deck. 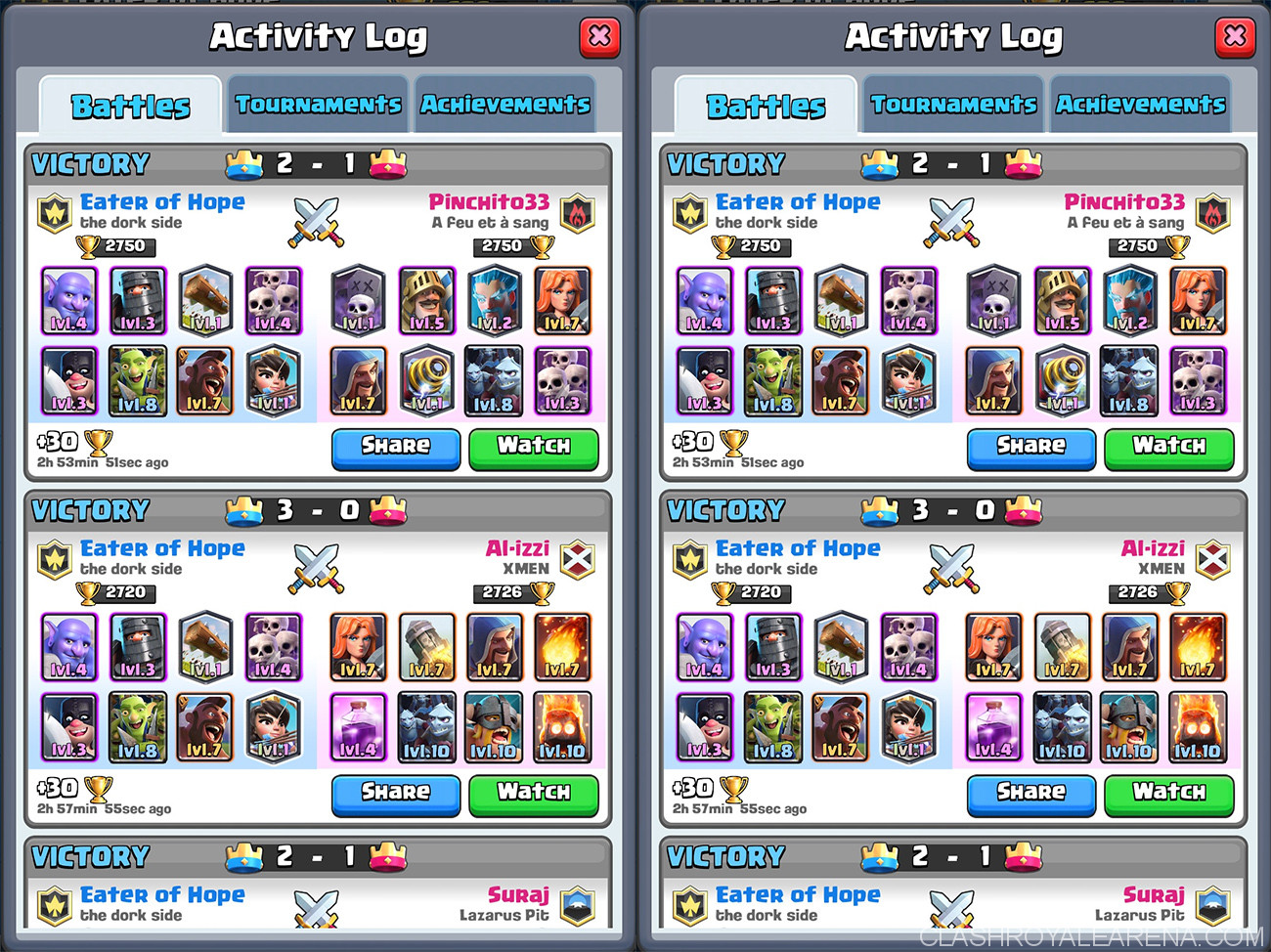 
Left alone, Hog and Goblin Gang can take out a Tower and do quite a bit of damage to the king Tower.

If your opponent decides to counter it, then he’s smart. This also means that your push might die there and then.

If your opponent counters with a Skeleton Army or a fellow Gang, the Goblins on your team will take care of that.

If your opponent Logs or Tornadoes your push, well that’s a whole different matter. Try to bait out The Log/Tornado with a Princess before doing this push.

If you know for a fact that your opponent has neither one of those spells, then don’t use a Princess for bait, because that’ll leave you with no Elixir. 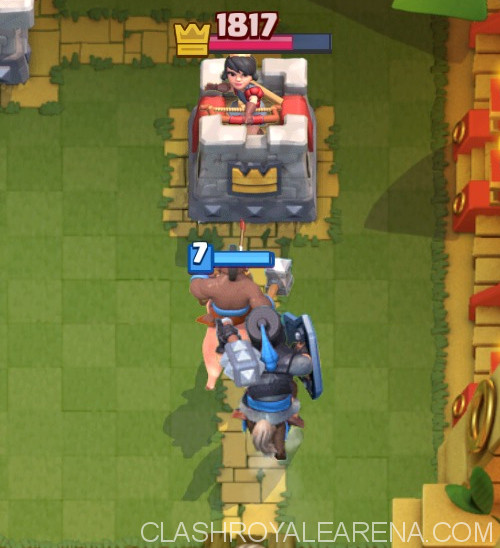 If your battle comes down to OT, give it all you’ve got. Keep constant pressure on your opponent, launching push after push against his remaining Tower, keeping enough Elixir to defend, but using enough for your pushes to be deadly.

If you’ve fallen under your opponent’s cycle, defend. The best you can hope for is a draw, but if you see an opportunity to damage his Tower, take it. Sometimes with this deck, you’ll manage to pull through.

You’ve probably noticed that almost all the pushes I mentioned use Hog. If you aren’t a Hog user, this deck isn’t for you. Also, if you aren’t happy with the pushes I posted above, do whatever you feel like, not all of those pushes work for everyone.

Obviously, you can’t win a battle without defending, and as in any deck, it’s important how you defend. Here are a few ways to defend against certain decks you may encounter during your battles.

Thanks guys! Sorry if it was a bit long, but I hope you enjoyed the guide.

Will, delete this while editing my guide. My email is demonlordofashmouth@gmail.com, don’t spam me. Also, I am working on an iPad, so I don’t have any good photo editors. If you have pictures that would be better for this guide, then use them, mine are pretty second rate. If this guide doesn’t get posted, well screw you. (Just kidding 😉