Hey guys, Neopolitan here. Today, I’ll be sharing with you guys this Arena 7 deck that pushed me to Arena 8 and close to Arena 9. Please note that this deck makes use of the Ice Wizard. If any card is replaced in this deck without adjusting your playstyle, it may ruin the synergy. So for the people who lack the cards in my deck, I’ll provide substitute cards with an explanation to accommodate the change in playstyle. Now, without further ado, here is my deck: 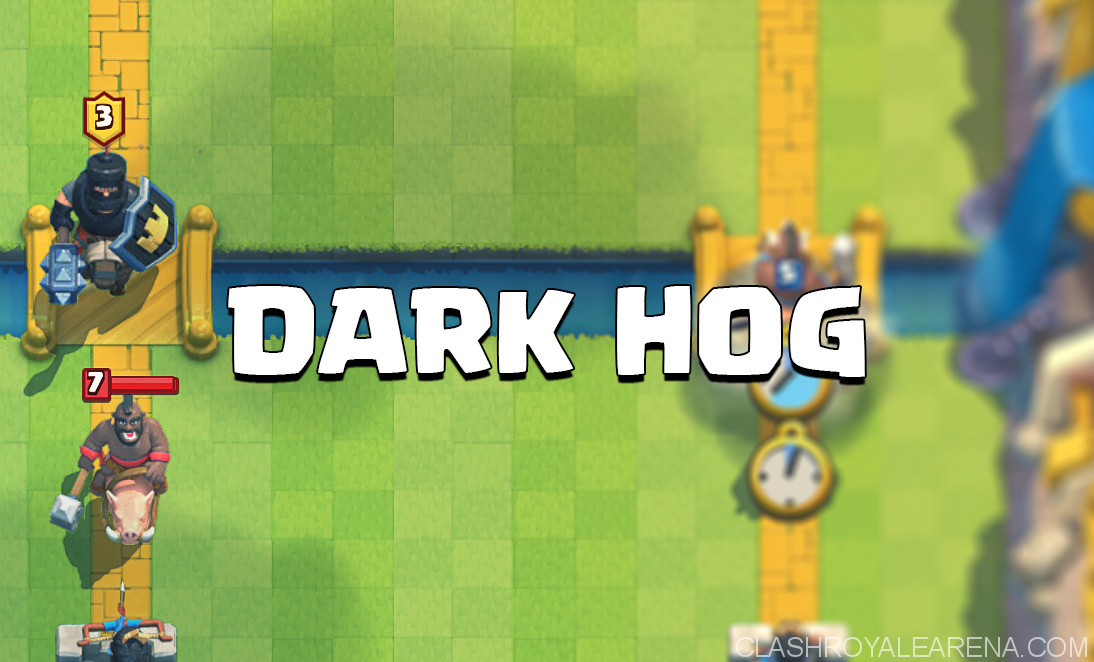 Zap: Post-nerf, the Zap is still a versatile 2 Elixir spell that does damage and stuns for half a second. You can use this to let your Hog take an extra swing or two, or use it to take out squishy troops like Goblins and Minions. It can also be used to reset the Royal Giant’s targeting, and reset Sparky’s charge.

Ice Wizard: Almost always use this guy on defense. He’s a medium health weak splash unit that targets air and slows down troops. Although not powerful by himself, combined with the Inferno Tower and/or other units you can form a solid defense, then spring back with a counterpush.

Inferno Tower: The backbone of your defense. He roasts single targets for incredible damage over time, shutting down pushes like P.E.K.K.A 2x Prince and Giant combos with ease.

Fire Spirits: These little guys are very dynamic, and can used in many, many ways. You can place them in front of a Minion Horde/Barbarians, granting you a positive elixir trade. You can also piggy push with your Hog Rider to shield it from squishy defenses like Minion Horde. For Barbarian defense, Fire Spirits cannot finish them off, but Zap can.

Hog Rider: The killer of your deck, the one that smashes through your tower and makes your opponent rage. The Hog Rider can do an insane amount of damage, but rarely send him alone. He can be piggy pushed with Fire Spirits or Goblins. If your opponent places a large tanking unit (e.g. Giant) or a medium health troop (e.g. Musketeer) at the back, this is a telltail sign that they’re building up a strong push. If you have a Hog and a piggy pusher, send them in on the opposite lane. This breaks up his push as he needs to spend elixir to defend his tower, making the attack a lot more easier to counter.

Mega Minion: An anti-meta high DPS flying semi-tank for 3 elixir. Mega Minion is a unit that you should solely use to defend and then counterpush, he makes a great temporary shield for your units to reach the tower. You should not use him to kill tanky units, but the support troops. If it’s alone, Mega Minion is good enough. If they’re clumped up together (let’s say Musketeer, Wizard, Witch), then you need a spanker. Use the Mega Minion to defend and tank, then use high DPS units (Fire Spirits are the best for killing support behind a tank) to spank.

Dark Prince: This card does fit in this deck. He’s a weaker Prince that does area damage, when charged up does 2x damage in a 360 degree radius around him like a Valkyrie. You can actually compare his stats to the Baby Dragon, as he has slightly higher HP and damage than it. The Dark Prince is versatile, and can be used both offensively and defensively.

On defense, due to his low damage and slight tankiness, use him to tank for your spankers to finish off support. On offense, NEVER use him as a main offensive unit. He deals little damage to the crown tower, and honestly it’s not very effective. You can use him as support though, pair him up with the Hog Rider to protect him against defenses. His shield protects him from high damage from troops like P.E.K.K.A, so it enables him to take at max a P.E.K.K.A swing or two.

Goblins: Good ol’ Goblins. They’re a trio 2 elixir squishy troops that runs fast and deals high DPS together. They are important in defense, to chip away at tanks if Inferno Tower is not in your hand. They can also be used to spank when dealing with support units, except for Baby Dragon and Valkyrie, for obvious reasons. They can also be used to pull in slow or tanky offensive units to stab them and kill them for a positive elixir trade. For splash units (except Baby Dragon and Valkyrie), you want to surround them. The high DPS of the Goblins will melt through those units. They can also be used to piggy push due to their complimenting movement speed and insane DPS.

Princess for Ice Wizard: The Princess has insane range, but slow attack. The princess can be used to defend from range, but the Princess is more suited for offensive play. Use her to siege and damage towers from a distance, forcing your opponent to spend elixir to counter her. She can also back up a push well, due to her wide range and high damage.

Archers for Ice Wizard: The Archers are strong support units for 3 elixir. They can survive hits from most units that would one shot Goblins (Valkyrie, Baby Dragon, Bomber, etc.), making them effective on defense. They also have moderate DPS, use them to back up pushes. The split technique, where you split the Archers to defend, is one of the strong points of the Archers as a defense unit. Here’s a video guide from Orange Juice Gaming about archer splits:

Minions for Mega Minion: At the same cost, Minions are 3 squishy units that fly and do slightly higher DPS than Mega Minion. There are 3 of them, and they move fast, so in a sense they are better at tanking offensively than Mega Minion. However, the same applies that you use them to defend rather than counterpush. However, they are susceptible to Arrows and other direct damage spells, so be careful.

Mini P.E.K.K.A for Mega Minion: They are both similar in many ways. The main one, being that they’re both high damage glass cannons. The Mini PEKKA’s a ground unit, it’s fast movespeed can be used to compliment a push and shove slower moving units. It’s high DPS also helps it to shred through tanks, and tank for spankers when killing support.

Valkyrie for Dark Prince: Tankier and higher DPS than Dark Prince, but moves slower and lacks a shield. Use her to kill support around her, and use spankers if necessary. If used on a push, place Valkyrie then a Hog Rider behind. The Hog will push the Valkyrie, making her reach the tower a lot quicker and start chipping away.

This deck depends heavily on chipping damage over time. The Hog Rider piggy pushed and accompanied with Dark Prince is no Giant Sparky Balloon. It’s not a killer combination, but it lets you chip in a reasonable amount of damage. Keep on chipping damage until you take a crown, then you either play aggressive or defend the rest of the game. I’d be lying if I said the chance of tying is low, but losing is not. The main weaknesses of this deck are Spawners and Siege.

Hog Freeze: If you know your opponent uses Hog Freeze, always keep 2 defensive units prepared. In case one of them gets frozen, use the second one to take care of the Hog Rider. (e.g. first Goblins, second Mega Minion)

PEKKA Double Prince: Alright, this one is tough. If your opponent places their PEKKA at the back, either place your Ice Wizard at the back or place your Inferno Tower 4 tiles from the river, 3 tiles from the crown tower. Once he unleashes his push, place the Mega Minion, as none of those units target air. The Ice Wizard buys time for the Inferno Tower and Mega Minion to chip in damage. You can distract them with Goblins/Dark Prince pull to buy time if they reach your tower.

Alternatively, you can piggy push the other side to break up his push. However, he can continue building his push to aim for a three crown. This a high risk, high reward move.

Giant Poison: If you know your opponent uses Poison, predict the poison range and when you defend place your troops away from that range. Your Mega Minion and Ice Wizard should be able to tank Poison, and you should use an Inferno Tower to finish the tanky units. Use the tank and spank method to finish off support. No difference, just avoid the Poison as best as you can.

Miner Cycle: Goblins in hand 24/7. You can predict the Miner’s travel. Hover your Goblins in the map. If it flashes an exclamation point, that’s where the Miner will spawn. Quickly place down your Goblins to tank and stab the Miner, reducing the damage done by the Miner. For the squishy troops, the Ice Wizard is pretty handy for stalling.

Spawner Decks: To be honest, try your best to tie. These guys are tough, especially if your opponent uses Rage. Once they place down their Hut, piggy push the other side, since they won’t have much elixir left to defend. This works best with a Barbarian Hut. Chip in damage over time, but if you find it incredibly difficult, aim to tie.

Thanks for reading my guide. If you have any questions, feel free to leave them in the comments! 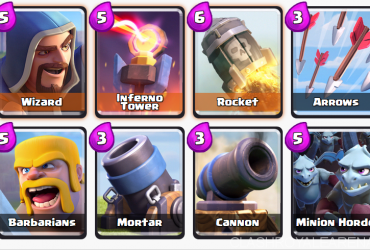 Hi guys. This is the Mortar Deck I (Blazeey from Reddit Element) used for my agonizing grind to Arena 7 as a Level 6. I’ve just turned Level 7 and … 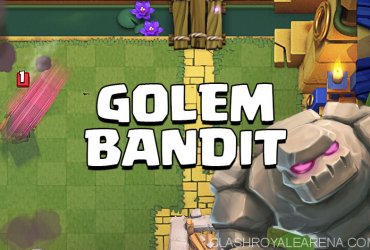 Wassup guys, Dark Prince (or Dank Prince/Apo the admin on discord) here with my very first guide! This deck is disgusting but in an amazing way(does that make sense?). This …