Hello fellow Clashers, this is ABAPO from Israel, clan Aba-Pagum, with my first guide.

It’s going to be a long and detailed one, but this deck got me to my personal best of 4327, so… worth reading. I’m using this deck for over 150 battles now- so it’s well tested. 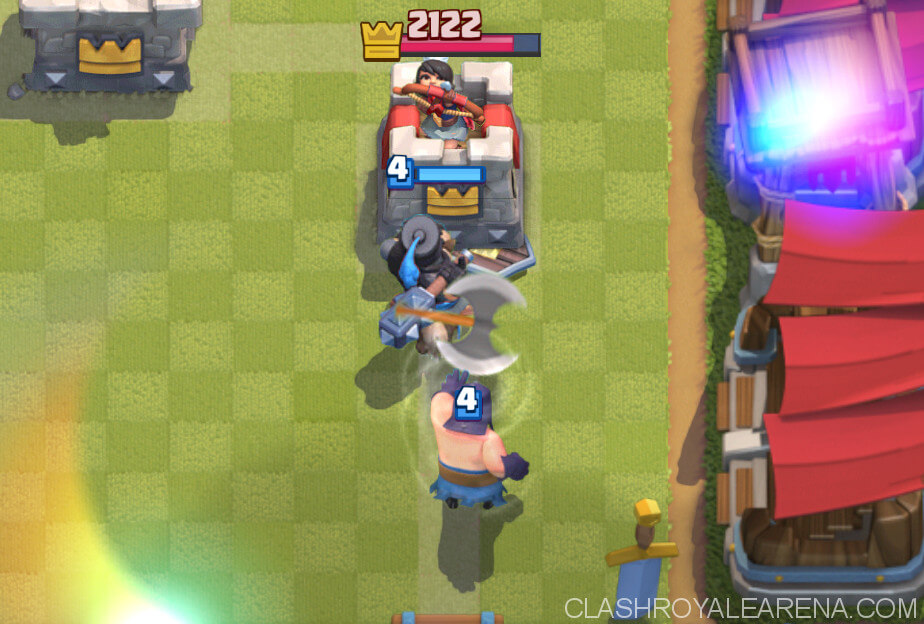 TL; DR: Control deck for Ladder for Arena 7 -> League. Reactive, slow and above all PATIENT. This is a great defensive deck with a formidable offense. Zap/ Arrows/ Log/ Poison resistant. Works great with many Win-conditions instead of Dark-Prince.

A bit about behind the scenes of this deck

I’m a 42 y/o dad, and started playing CR 3-4 months after the international release, following my 10 y/o boy. Like many of us here – he’s long since moved on to other games and I stayed.

I love the thought involved in this game and to me it’s like Chess with cards. However… I’m sadly aware that I’m not as finger-nimble on the screen as most of the younger players, and not as fast to respond.

I’ve had many troubles climbing up the ladder, especially since the rise of faster and faster Metas.

That is why I opted early on to focus on control decks, which are inherently slower and more forgiving to user mistakes

I’ve been using the strongest synergy in the game, IMHO, the Executioner-Tornado ever since I got the Ax-boy.

More tips on combining that to the mighty and feared P.Ex-Nado later on.

The ground splash unit has received a buff- and has a shorter Charge length than the Prince- only 2 tiles- and for 1 Elixir less.

This makes him a great Main Win Condition now for this deck. More on substitutions- later on.

He will be our early game mini-tank, canceling small pushes such as rams, small Chippers and Squishies. He’s also a split push master- when your P.E.K.K.A is counter-pushing with an Executioner behind her.

The ideal use for him is pushing the P.E.K.K.A and bypassing her when she’s distracted- to deliver Charge & Splash damage.

This guy likes a crowd- and the denser the better! FYI, Khaleesi – He’s the real storm-born.

The most versatile spell in the game, I feel, and certainly the most synergizing spell. Amazing return-for-value for just 3 elixir.

Use it to pull troops to the king tower, to bundle the up for the Executioner, or to gather far away threats  to the loving embrace on the motherly P.E.K.K.A.

If they start an Inferno-Dragon in the middle a great trick is to Tornado it to the opposite side of your attacking P.E.K.K.A so he’ll lose range and wander on to your princess tower- to be dealt with MM or Bats.

P.E.K.K.A is the main tank/killer of the deck. It’s also your designated SECONDARY win condition- although in many cases WILL land the decisive blow.

You all know her by now, as you get her and face her very early on.

Since we don’t have Pump in the deck we need to be careful with our elixir investment in this card.

Make sure that your opponent is not at peak elixir too or else they may punish you with a small push.

This deck works best with an Over-Levelled P.E.K.K.A., therefore less applicable to tournaments. This is doable since the tornado is very level independent (the mechanic is a lot more important than the damage).

This is a great tradeoff card- the usually not only destroys or nearly so most support troops- it also deals value chip damage to nearby towers.

Always be mindful of the setting in which you use it- as it’s the only big damage spell you have and WILL win you games at clutch time.

For instance- one of your towers is at 2/3 health+, and his Minion horde is passing the river AND a Gob. Barrel is also on the way- it’s a good idea to trade one blow to decimating the lot of them with our fireball- 4 elixir gain.

Your main defense against Inferno-Dragon, and will support many pushes.

It’s a great defensive card and also one of our cycle cards.

Can single-wingedly kill all major tanks if uninterrupted.

Probably the best DPS per Elixir ratio in the game. Another cycle card, obviously…

In the words of the great Supermarine: It is also good to gain advantages in battles like P.E.K.K.A vs P.E.K.K.A or a similar push so the delay that Zap causes the enemy can change the tide in the game.

Try to activate the King tower with your tornado early as possible- can be key against fast decks.

P.Ex-Nado + Zap with D-Prince in waiting. If you got this- wait. Don’t start until you see what the other player does. If needed, WAIT till double-time.

This deck shines there and you’ll most likely win in a single push as you’ll be able to cycle back to your D-Prince/ Exe/ P.E.K.K.A

3 spells, Mega-Minion and bats. Wait for 9.66± Elixir (As not to leak Elixir- shameful waste!) and send bats. Most likely your opponent will wait to see what you got so again- 9.66± and MM. By then you’ve got a decent defensive hand.

Cycle as needed to get closer to the best hand, don’t show your P.E.K.K.A unless must- to stop bridge pushes like E-Barbs, Bandit-Battle Ram, M-K and the like.

Wait to see what the opponent holds.

If you have the ideal hand- and the opponent waits too- even let 2 minutes pass. In many such cases I’ve won in a single counter push, during Double-time.

Hide P.E.K.K.A unless necessary, make counter attacks that will get us good elixir trades.

By now you know their deck, know their counters to yours and have a good idea how to respond AND reach a good card cycle against this opponent.

If you can’t support your P.E.K.K.A. against an Inferno AND have juice to spare let blaze to glory, regroup and try again.

Wait for the opponents’ mistakes – don’t give them yours.

If facing a Hog cycle be sure to always have your P.E.K.K.A cycled ready to counter the Hog.

If Facing Golem have you e Exe ready first, than P.E.K.K.A, than Fireball and/or Nado- as a Golem is always supported by splashers.

Send exploratory D-Prince pushes the other lane- support lightly with Zap/Bats if not needed as counters to Inferno. This can be game altering chip damage & distraction. It’ll disorient the opponent and will give you options.

When you’ve won- lean back and give the P.E.K.K.A win laugh: MUHAHAHA!!!

Keep this Deck below 4.1 Elixir, 3.8 for best results- as your main defensive troop is 7 Elixir…

P.E.K.K.A as shield at the bridge, ExNado the support, D-Prince for chip damage.

These are hard as they cycle faster than you to the siege weapon.

Be smart and conservative and go for tie.

It’s easy to win those, but you’ll need cycling experience. If you manage to achieve the right cycle you’ll constantly have a P.E.K.K.A to carve the hog, and an excellent counter push position.

When you’ve reached Double-time, and not made stupid mistakes- you’ve most likely already won, as you’ll be able to match their cycle speed and have a second P.E.K.K.A. ready by the time they recover from the previous counter-push.

These players are usually very smart.

Always fireball the pump. P.E.K.K.A the two Muskies lane, and support depending on condition. MM the lone Muskie when it locks on the Princess tower/ D-Prince. Tornado the pair to the P.E.K.K.A, and if you managed to support it with Exe you’re in a good place. The opponent isn’t…

If you didn’t- D-Price+ bats the other lane.

Exe between Princess Tower and King Tower to the Huts lane, P.E.K.K.A to kill Miners and chargers. Then support counter-push.

P.E.K.K.A the Giant, Zap the fast tanks charges and support with exe in the back.

Defend split pushes and counter those with you D-Prince/ MM/ Bats as needed. If no Split push comes- use D-Prince to push P.E.K.K.A as a shield.

Be patient, as they can out cycle you…

Pro-tip: if the opponents splits the E-Barbs at the back or at the other side of the river- place your P.E.K.K.A 4 tile above the king and in the middle, so she draws the both to her. Then counter-push. Same goes for Barbs.

Same as Giant- just at the bridge.

MM and Bats come from the sides as to avoid opponents’ Splasers as best as possible.

P.E.K.K.A. same lane. Exe in support and Nado at the right time go get the Lava + support.

Than MM + Bats to support, and D-Prince to push the P.E.K.K.A

Honestly- I’m 90% losses against those.

They just cycle too fast, and the Rocket destroys all my support.

Good luck with those…

Have fun, kill much and I’d love to see your comments