Kiting elite barbs is an efficient way to buy yourself more time. It is best to do this with an ice golem or ram. Whichever side your opponent drops them, you should place the ice golem (I will use him as the example) on the opposite side just up at the river. It should be one tile from the middle.

So if your opponent plays them the right lane, drop the ice golem in the left center, so the elite barbs follow it to the other side.

Split elite barbs are so annoying whether split in the back or up front. To counter this I play my counter directly in the middle. I place it closer to the more offensive side. So if I have a knight, and one elite barb is coming down the right, and one on the left, but the one on the right has a Valkyrie in front of it, I want to place the knight the right side of the middle (a knight would not be enough against this push so you would have to support it more). Also I wouldn’t play your counter to close to the king tower, you want it more upfront to ensure that both elite barbarians attack it. 3-4 tiles from the river is a good place to get both elite barbarians to attack your counter If you aren’t ready for the elite barbarians or you don’t know they have them, you might have to place the counter lower or else the elite barbs might be too close to the tower and attack the tower.

If you use a bait card like minion horde, or goblin gang to counter them, you want to make sure you have baited out their spells first. Also try to switch up which cards you counter them with because you don’t want to be predictable and lose the game to a predictive log. Also since goblin gang is easily killed by elite barbs in most cases, you might want to include an ice spirit or ice golem so the stab goblins can stay alive to melt the e-barbs. When you have a pair of elite barbs coming down the left lane, you can either pull them to the middle with a counter card or face it straight on. If you face the e-barbs straight on you will take more damage to your counter card, and maybe to your tower. I only play straight up front if I didn’t have enough elixir and they’re already at the tower, or if they will not be pulled to the middle because they are closer to the tower. Playing it in the middle is always the most versatile unless you weren’t ready to counter them.

At the beginning of the game, I always play passively and never dip below 5-7 elixir. I want to be prepared for elite barbs, so many people play them. If my opponent is playing elite barbs, I keep my hard counter in my hand at all times and use it specifically for when the elite barbs are played. I also never dip below more than 3 of the cost of my counter since I could be punished and not have enough elixir to counter the elite barbs. In my case, I use Pekka as a counter. I always stay above 5 elixir unless their elite barbs are out of cycle. Also most elite barb players aren’t the most skilled (IMO so don’t kill me in the comments) and they only request elite barbs until they are at max level -_-. So a lot of elite barb players overcommit in trying to take a tower and I can get a massive elixir advantage. I then punish opposite lane while they are stuck with defending any remaining troops from my defense while the fresh troops kill their other tower. So even if I start the game 0-1 because of a bad hand or something, I can tie it or win it almost all the time. There are certain cards that are very popular with elite barbs, most decks will have two or more of them

I’d say that multiple spells and a minion horde are two very popular cards to play with elite barbs. So when building or tweaking a deck you might want to include two counters to these cards. For example, I just swapped out inferno dragon for a princess in my Pekka bait deck  (spoiler alert) because I couldn’t counter minion horde well enough.

Last But Not Least

Get used to fighting them. As soon as your above arena 7 you will see them a lot. You have to keep a clear head and not panic. If you panic you will lose. Just keep the mindset that out of every 2 matches, one will probably have elite barbarians. That is why most of the deck guides I post have a Pekka since she counters elite barbs amazingly well. 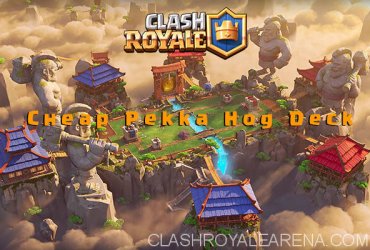 Wassup guys! Dank/Dark Prince here with yet again another guide! In case you’re wondering why I’m doing so many guides, I want to reach Top Contributors list as fast as … 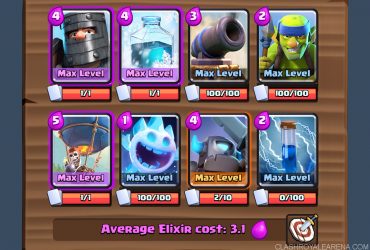 Hello all, I am Warlock and I have a very interesting Balloon Freeze Deck to share with you guys. This deck got me to #1 Global today. Credit for making …