Tired of facing overleveled Royal Giant? Tired of watching it poop on your tower from the bridge? Well then you’ve come to the right place with all your answers! Today, I am going to show you the best ways to counter Royal Giant! 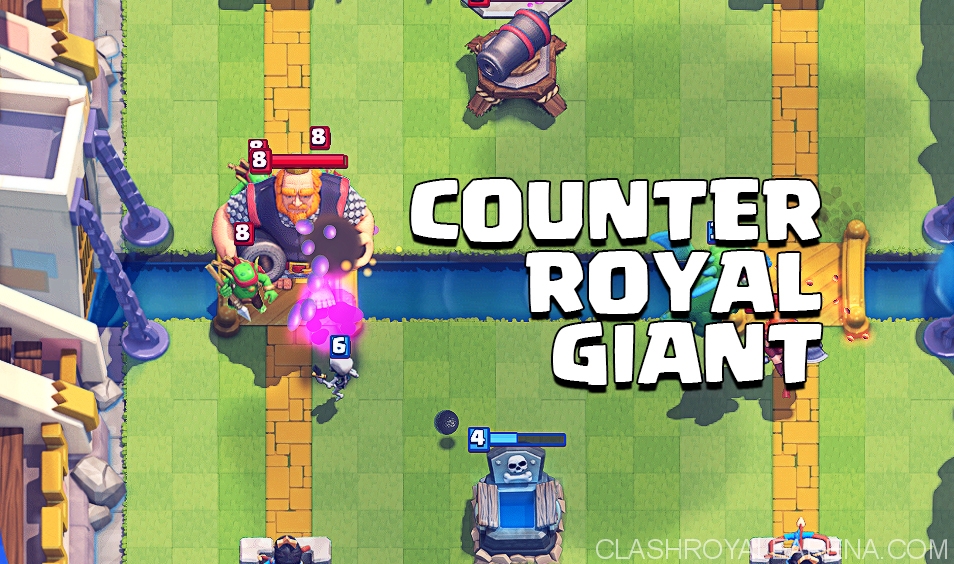 How to counter Royal Giant in Clash Royale

Hey guys, Corrosive Logic here, bringing another deck guide to the Arena! So as you all know, the Royal Giant has been a hot topic lately. It gets an extreme amount of hate and literally right after I started writing this guide Clash with Ash uploads a video regarding “Royal Giant Destroying Ladder”. Overleveled Royal Giant is common and really annoying at around the 3500-4500 trophy range. That’s why I made a deck that would counter it extremely well. Cards were 10/7/4/1.25 and the deck got me to 4.1k cups! 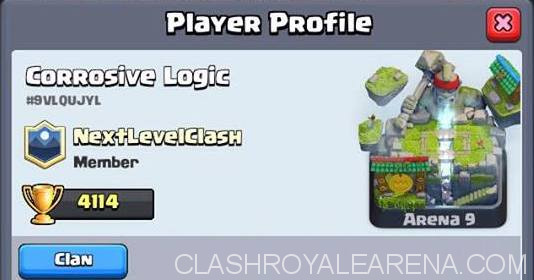 Firstly, before I start on the deck guide I want you all to understand a little bit more about the Royal Giant and why it’s so annoying.

Clearly, at Tournament Standards it is not that strong, it only shines because it is a Common, and it is easy to overlevel. But why overlevel the Royal Giant, why not the other commons? Well, very simply, because it is a win condition. For this reason, I don’t believe that Royal Giant deserves a nerf, far too many players have invested in it and it seems that there could be more Royal Giant players than Royal Giant haters.

Ladder Royal Giant players usually have a full deck of overleveled commons. This extremely irritates players as it can be extremely difficult to defend.

To demonstrate how powerful it is, a level 12 Royal Giant that I often meet in ladder has more health than a lvl 7 Giant. None of my Rares are above level 7, so realistically, I am playing against a tourney level giant who can take 2 steps and start shooting my tower. THAT is why it is so damn annoying.

Now, let’s get down to my anti-RG Deck guide! This deck also works EXTREMELY well against Giant beatdown decks, and some hog decks. For the purpose of this guide I will be referring to Royal Giant players as RGPs. I also made a video guide of this deck which can be found below.

At the moment, I’ve yet to test succeeding variations of this deck, so as of now I have 3 Legendaries in it. I am going to give a very brief description of the cards’ uses below so that you have a general idea of the deck before I go into it deeper. It generally takes the form of a bait deck.

Why this deck can shut down the Royal Giant

First of all, on a lone Royal Giant, Skeleton Army, Minion Horde, and Inferno are all able to kill a Royal Giany easily because of their extremely high DPS.

Yet Inferno Tower is NEVER enough in a deck to shutdown ladder Royal Giant’s. RGPs are not stupid, 95 % of decks will have minions and zap to counter the inferno. Skeleton Army and Minion Horde can obviously be countered by spells…. which is why I have ALL 3 of them in this deck.

The first Royal Giant counter you should go to is the Inferno; more likely than not, they will Zap it or use Minions in the center of the map to distract the Inferno. For this reason, it is good to vary your Inferno placement. Sometimes at the center of the map, sometimes on the edge of the arena beside your crown tower. Optimal Inferno placement is when the Royal Giant crosses the bridge, so that your crown tower can target it too.

So the great thing about this deck is that right after they play their Zap on the Inferno, you can play Skeleton Army to completely decimate their troops. If they are playing a splash card e.g. Wizard behind the Royal Giant, I would definitely Fireball + Log their troops first.  If they have a single target cards like Musketeer, Mini P.E.K.k.A, then I would place the Skeleton Army in between the Royal Giant and the supporting troops. Be careful when logging the Royal Giant so that you don’t push it out of range of the inferno. Occasionally, you will play against someone who has log+zap, in this case, you can play Minion Horde instead of Skeleton Army. That is basically the generally idea behind defense, and it is extremely effective!

If you are expecting Minions on your Inferno Tower, it is OK to Fireball them as long as you hit the Royal Giant too. I usually place my Princess on the other side of the map to kill Minions with the help of the Ice Spirit. The Ice Spirit is extremely useful on defense, sometimes your Inferno is about to get destroyed before it reaches maximum DPS, so in this case you can use Ice Spirit to freeze the Royal Giant, thus saving the Inferno and giving it enough lifetime to charge up.

As a last resort, I do recommend using the Miner to take out support units, it is actually better than you might think defensively.

So let’s briefly summarize the main defensive idea, Inferno on Royal Giant, Fireball+Log support units, if they Zap use Skeleton Army, if they have Zap+Log then use horde.

Most of the time, I will do small chip pushes with Miner Ice Spirit. If I have Princess as a starting hand, I will almost always play it at the back. If I’m ahead in elixir I will do Miner+Horde or Miner+Skeleton Army pushes. More often than not I will split Skeleton Army for those pushes, so that I can somewhat defend on the other side.

Otherwise, all my big pushes come from defending with Horde/Skarmy. When you are playing princess on the bridge, make sure there is no Skarmy or Horde nearby that they can kill with a spell alongside the Princess.

When a Giant/Golem is placed at the back and I’m sitting on full Elixir, I will often play a Princess on the bridge, this often requires them to play a troop to kill my Princess. I use Inferno to counter the troop and the Inferno will still be alive for when the tank comes. If they use a log to kill the Princess, then by happy that your Skarmy will do some naughty things on defense!

Make sure to always be aware of your opponent’s spell usage and their card cycle. If they have used Zap+Arrows+Fireball, I will always do a horde miner push. Sometimes when you are defending, they can decide to zap your horde while it’s still on your side on the map. If you have a Miner, use it immediately to tank for the Horde, they have already zapped it so if they Fireball/Arrows it again it will cost them 2 spells just to take out Horde.

One tower down Scenario

The Royal Giant can be dropped in the middle of the map and start firing at your tower, it is almost impossible to prevent it from getting shots on your tower. If there is less than 1min 30 secs left including overtime, then try and play for a draw. Drop troops in the middle when you think he’s going to play a Royal Giant. The Inferno can be used to push the Royal Giant back but this is dodgy sometimes, Inferno+Ice Spirit is safer.

If you are one tower up, try and defend until the end if possible. A nice push I like doing when I’m a tower up is Miner+Skarmy+Horde, with either Horde or Skarmy at the center of the map. Usually my horde is advancing from defense then I surprise them with a Miner+Skarmy in the middle. 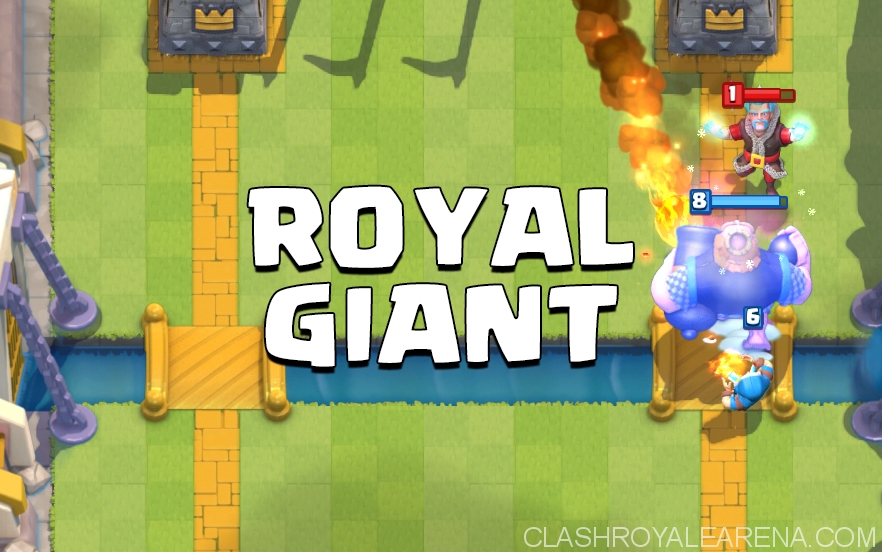 Problems with this deck

As I have said earlier, this deck works extremely well against Giant beatdown and lots of Hog decks, but there are certain instances where it will not shine; I will list them below.

But in the end, this deck is a great Royal Giant counter!! Be sure to try it out if you don’t believe me, and make sure you help me out by subscribing to my channel! Thanks for reading.