Hello guys, I’m PeakCell and I want to talk to you about a common problem faced by almost all Hog Rider players.

This problem is the Inferno Tower. 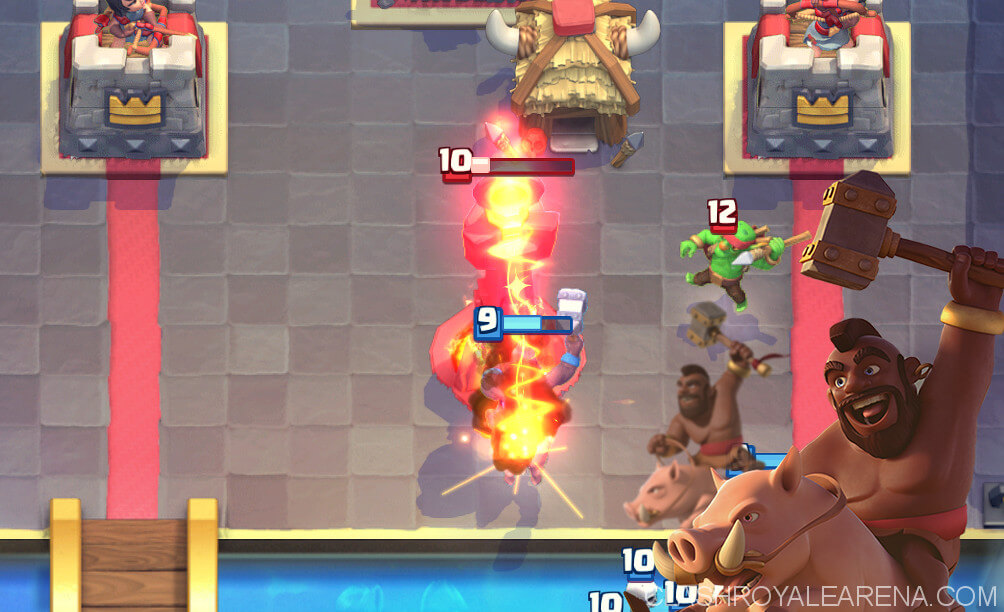 While many Hog players see the Inferno Tower as one of the biggest obstacles, I think I can give you some tips to get rid of this 5 Elixir thing or even make profit out of it.

I may be a good person to talk about this since I am a long time Hog Rider player who regularly faces Inferno Towers, but also plays the Inferno Tower.

When I started using my deck (I play the same since 7 months ago) I tried many different playstyles against things which countered me (Inferno Tower as well as Lava Miner decks, Furnace, Mini P.E.K.K.A etc). Finally, I found efficient playstyles against almost all of my counters (Only Lavaloon excluded, and siege because I didn’t face enough of those), including the Inferno Tower.

Let me share with you everything I do when I need to play against an Inferno Tower.

What you can do to profit from it

What if I told you the Inferno Tower is the perfect way to do so?

Remember: The Inferno Tower costs 5 Elixir, and your Hog costs 4. Most of your opponents will counter a lone Hog with an Inferno Tower, giving you an advantage on the trade.

What does it mean?

It means that, whenever you feel you’re behind, you can throw a Hog Rider alone.

Keep your thumb over the Zap tho:

What you need to AVOID against it

The Inferno Tower is still, in theory, a Hog Rider counter.

But why can’t you get rid of it?

It maybe because you don’t have the dark tactics (I’ll explain those later, there are a lot of things you can do) but it could be because you handle the situation very poorly.

As I said (or wrote) you need to be not too far behind your opponent, or else your opponent is not going to let you pass this Inferno.

Now why are you behind ?

It may be because you overcommit.

Many Hog players, even at some high ranks, will overcommit and handle the situation poorly.

Now what can you do against it ?

You need to be more aware of the situation, and to keep your Fireball or Zap or whatever if the situation is too hard to deal with (A Zap won’t be any use if your Hog is hit by the two towers, and a Fireball may be useful to destroy the Inferno but if your opponent has a Knight hitting your Hog, your Hog might still die.)

Read the situation better and you’ll avoid useless expenses. Avoiding useless expenses will make you win easily. (This sentence is important because it’s true for pretty much every deck in the game and at almost any trophy range)

How to counter this building ?

The Inferno Tower is quite simple to counter due to its cost and to its way of functionning.

The real problem is when you opponent puts other units to defend against your push, but it will most likely become a disadvantage for them if you don’t use your spells (Since the Inferno Tower by itself is pretty expensive).

The best method is OUTCYCLING the Inferno Tower.

It means you’re basically gonna throw another Hog push before your opponent gets their Inferno back.

In this case, you just need to take care about the other defensive units your opponent might place; if they have a Goblin Gang, for example, you might want to throw a Log.

The other best method (Equally efficient) is to read your opponent and punish them.

It means you’re gonna take care of what your opponent plays and if they place many units in a short period of time, they most likely won’t have 5 Elixir to place this Inferno

If they get enough Elixir back, they may also fail the Inferno by placing it too late; you might consider zapping it for some extra swings on the Tower since the Inferno Tower will most likely still have the range to focus your Hog.

Best situation is if you have small support units, a Zap will make the Inferno refocus on your Goblins/Minions/whatever, and you’ll take the Tower easily.

Best thing about this method is that generally your opponent will either fail their Inferno OR try to counter with cheap units, either way your Hog should land a few swings on their Tower.

If your Hog is followed by Goblins or Skeletons, the Inferno Tower might hit the Hog first.

The Tower will now focus the small units and your Hog will destroy it. Again, take care of the rest of your opponent’s cards.

You can place your support units in front of the Hog

so you won’t have to make the Inferno Tower reset its focus.

But it won’t be too much of a surprise for your opponent and they’ll probably react to this strategy efficiently, so that’s just something to do against very bad players (I never do that)

If your opponent is bad enough to preventively place an Inferno Tower, just pigpush on the other side

(Pigpush is when you place your Hog on the corner next to the bridge so the Hog jumps over the river, as you can see in this gif.)

By doing this, the Hog will ignore the Inferno Tower and hopefully do a lot of damages to the Tower on the other side.

Spells are OP against the Inferno!

Lightning is a good example, but the Fireball is great to, as well as the Zap resetting the charge, the Freeze letting the Hog completely free, etc.

Use them! But use them only when the situation is appropriate !

I hope this guide will help a lot of people. If you have questions, ask them in the comments and I’ll try to answer most of them. Good luck on mastering the Hog, and see you in the Clash Royale Arena !