Hello fellow clashers! This guide to defeating the Giant + Mega Minion combo is brought to you by usc1313, a pro clasher whose goal it is to make it to 4,000 trophies with Tournament Level Cards! It comes with a video guide on all of the examples in this article with detailed explanations done by KairosTime. 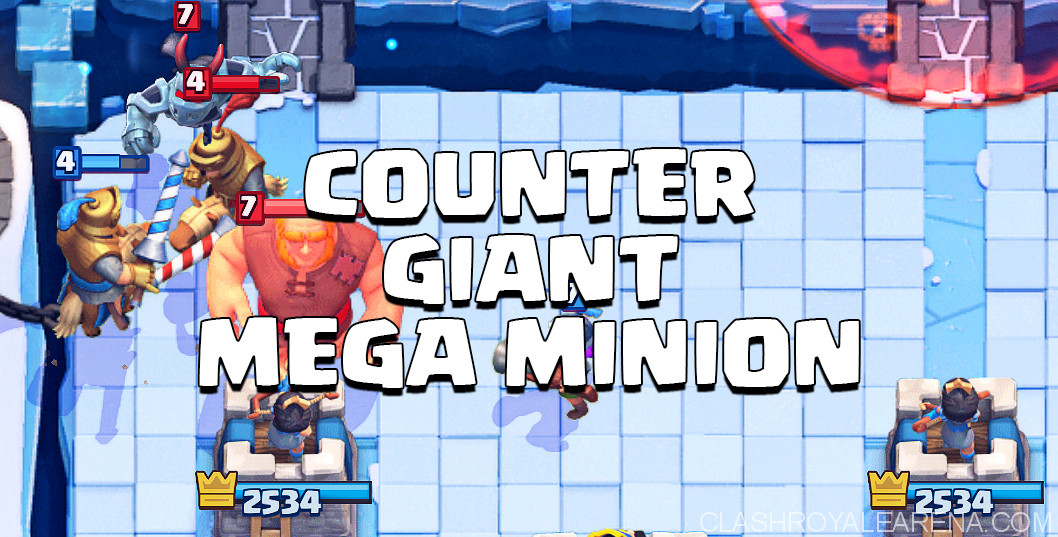 How to counter Giant Mega Minion

Even with its recent release, Mega Minion has already secured its place as a staple card in the Meta, being usable in so many different types of decks! It’s versatility and ability to transition from defense to offense make it a popular choice in Giant Poison, Miner Inferno, and Lava Hound Miner decks. The combination of Mega Minion behind a tank makes for a intimidating push for as little as 8 elixir when paired with the Giant. With the lack of Air Defense in many decks, this simple push can be devastating if not dealt with correctly.

Biggest Thing to Remember: Separate the Giant and the Mega Minion!

Because the Giant has a bigger hitbox than the Mega Minion, your troops are more likely to target him than Mega Minion. This is what makes this combination so difficult to counter. That being said, your goal should be to separate the two by either pulling the Giant, or by pulling the Mega Minion. Once you’ve done this, you can deal with them individually. Since the Mega Minion is the troop you should focus on killing first, pulling it away from the Giant is key for a solid defense. Excellent cards for this are: Buildings, The Log, Ice Spirit, Skeletons, and Spear Goblins.

Cannon Pull – This defense separates the Giant from the Mega Minion. It is very important that you place the cannon into the opposite lane so that it will only pull the Giant, and not the Mega Minion along with it. It also forces the Giant to walk the greatest amount of distance. You will want to watch the video to see exact placement. Other buildings, especially Inferno Tower, are substitutes for the Cannon as well. One building that has a harder time making this split successful is the Tesla Tower. That being said, it will still work if you place it in the center of the map.

Hog Rider Distraction – This is done by distracting the Mega Minion with a Hog Rider, and then using the Ice Spirit or Skeletons to further distract the it while your other troops clear the Giant. This can take some practice to pull off, but can be a great way to get some damage on a tower on the same lane that your opponent is focusing their attack.


Watch Hog Rider Distraction Example
Ice Spirit Pull – This is one of the easiest ways to counter this combo, and is by far my favorite. The Ice Spirit draws the Mega Minion far enough away from the Giant to confidently place the Musketeer to target the Mega Minion. Archers or Spear Goblins also will get the job done. If you have a Mini PEKKA placed early enough, you can even avoid any damage on your tower from the Giant, and then strike with a counter attack!

Watch Ice Spirit Pull Example
Ice Spirit + Spear Goblins – This defense is similar to the one above, except that in this push, you can spend less to defend by allowing your Mini PEKKA to take some damage from the Mega Minion. Spear Goblins are weaker to Poison and vulnerable to Zap, so they are less reliable. That being said, if your opponent doesn’t have these cards in their hand, this is a cheap way to stop a big push. Any high DPS unit can be used to finish off Giant, Mini PEKKA is just the example.

Watch Ice Spirit + Spear Goblins Example
Barbarians + Ice Spirit – This defense is solid against the Giant Mega Minion combo and only costs 6 Elixir. Barbarians don’t see as much use as Mini PEKKA but stop this combo when paired with an Ice Spirit without allowing any tower damage. They provide enough distraction value and DPS to melt the Giant and hold up the Mega Minion.

Watch Barbarians + Ice Spirit Example
Mega Minion + Ice Spirit – Because the Mega Minion is such a strong card right now, chances are you most likely are using it in your deck! This is the most effective defense in my opinion because it offers a great opportunity for a counter attack by placing a troop at the bridge after defending. The key point to remember is to place the Ice Spirit far enough away so the opponents Mega Minion does not attack it.

Watch Mega Minion + Ice Spirit Example
Giant Pull – If you’re playing a Giant deck, this technique is a great way to make your own push as long as you’re ok with sacrificing some tower damage in order to counter attack the other lane. If a Mini P.E.K.K.A. is used instead of Goblins, it heavily reduces the tower damage taken as well as providing a dangerous option for dual lane pressure.

Watch Giant Pull Example
These are not the only ways to counter this push, but are some of the best. As long as you can separate the two cards, you can make a successful defense. Just be careful where you place defending troops because you know your opponent will most likely have poison on hand!

Thank you for taking the time to read this post! I hope you learned something from the guide. If I hit 4000 with 9/7/4/1, I will do a deck guide with replays! All is welcome in the comments below. 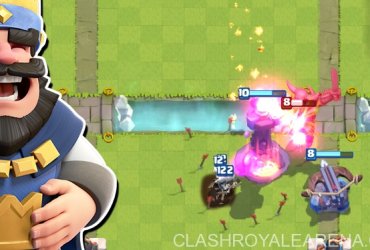 Hello my friends, in this post I’m going to give you guys some very great advice on how to start and the fastest way to progress in this game. I … 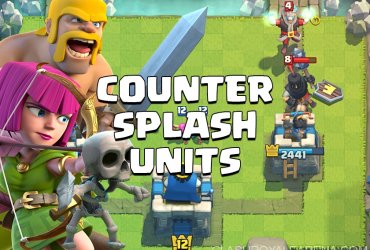 Hello guys today Orange Juice is going to show you how to counter splash damaging units properly. Also, couples of advanced tips will be also shared in this post. Let’s …