Hello fellow Clashers! I’m KairosTime and today I’m bringing you Part III to the “Strategy Guide to Clash Royale” with how to Counter Every Deck in Clash Royale using The Two Triangle Theory. This is a guide for new and experienced players alike and will complete your understanding of how every deck in Clash Royale interacts with each other. This is a precursor to a future article that I will publish on How to Build the Best Decks. 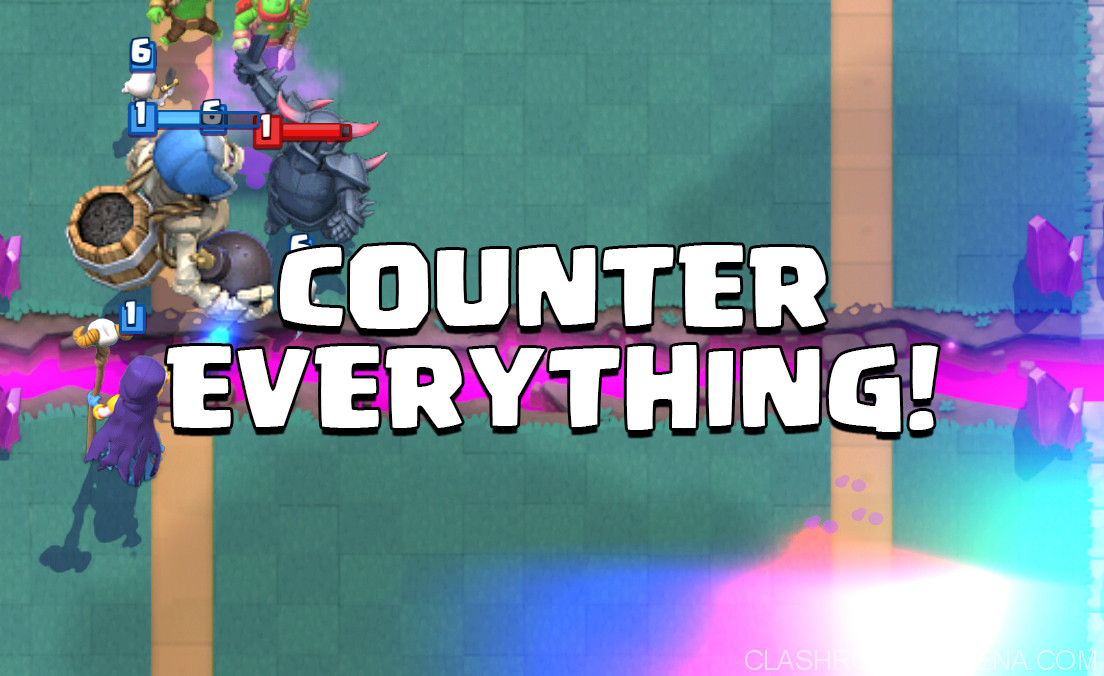 How to counter Every Deck in Clash Royale

and skyrocket your trophies

If you haven’t read Parts I and II on my Strategy Guide to Clash Royale, you can do so here:

This written guide comes with a video guide that includes specific examples that I would recommend watching.

In this guide, we will focus on 5 key topics:

Before I move on, I wanted to give a big shoutout to Kairos Kingdom Clan Leader metaky, and avid Clash Royale Competitive player and redditor edihau for helping me develop the Clash Royale Theory of 2 Triangles.

Many of you are aware of this 1st Triangle, or the triangle of Control, Beatdown, and Siege originally defined by The_RumHam.

Here is a quick refresher including some additions:

Note: Offensive and Defensive Ability are based off of ease of dealing or preventing damage to a tower and not the focus of play-style.

Your mindset works if you can explain why Clash Royale is not played in a vacuum–find a way to bring up the fact that, for example, siege is weak on defense only because it can’t set up any sort of counterpush. Apply what counterpushing gives each archetype to everything. 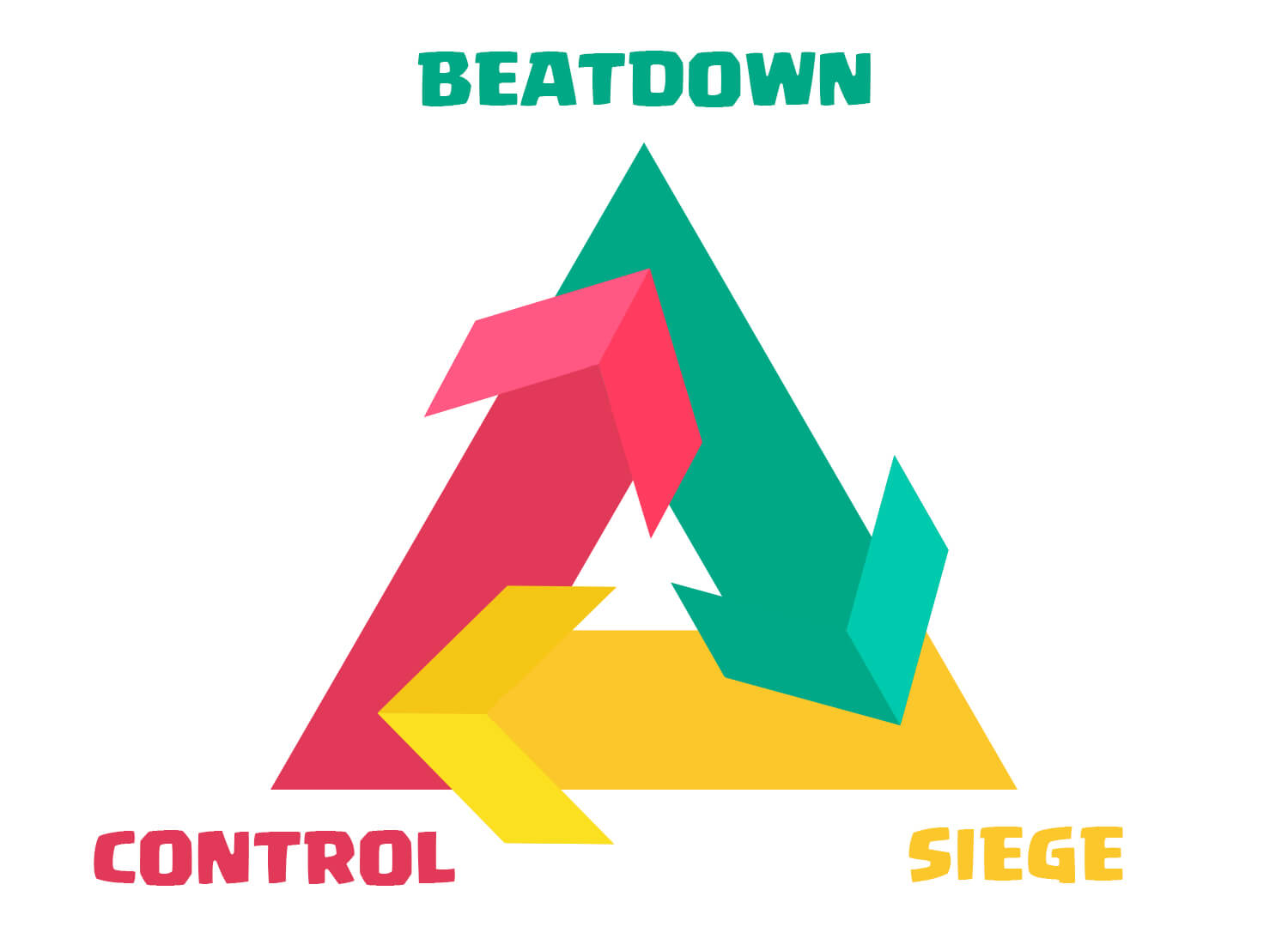 By taking a look at the triangle to the right, you can see a simple representation of how these Archetype Advantages and Disadvantages influence the game.

Siege Decks have an Archetype Advantage to Control decks because Siege decks do well on their side of the arena, while Control decks focus on turning successful defenses into counterpushes. Since Siege Decks don’t go onto the enemy side, it is hard for Control Decks to win with this focus. In addition, it is difficult for Control decks to overcome the defensive ability of Siege decks since they tend to not be able to build up a push like Beatdown decks can.

Control decks have an Archetype Advantage to Beatdown decks because they tend to play better against enemy troops on their side the arena. Additionally, Control decks can disrupt a Beatdown push by rushing the opposing lane when the Beatdown player doesn’t have as flexible of a defense.

While this is only 1 piece of the puzzle, this is useful when it comes to choosing which type of deck to use in the current meta. It is important to realize that these Archetype Advantages aren’t so strong that they can’t be overcome. The marker of a truly skilled player is being able to beat their opponent with skill when they’re at an Archetype Disadvantage.

While you’re most likely aware of the Archetype Triangle, you may not have heard about this 2nd triangle that was also touched on by /u/The_RumHam in his “Doomsday Machine Theory” post on Reddit. This shows the interactions between Fast, Slow, and Medium Decks. 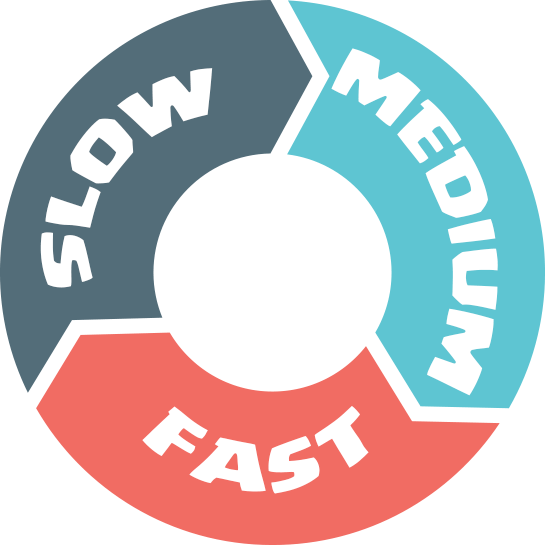 By taking a look at the triangle to the right, you can see a simple representation of how these Speed Advantages and Disadvantages influence the game.

Fast decks have a Speed Advantage to Slow Decks because when a Slow deck goes on the offense by dropping an expensive investment, their defense is so inflexible that Fast Decks can take advantage of it and rush the other lane. In order to prevent a lost tower, the Slow Deck has to defend with everything they have, which leaves little or no support in the main push, which the Fast Deck can clear while the Slow Deck recovers their elixir to prepare for the next push. If the Slow Deck can’t defend, this will result in massive tower damage or even a lost tower. Because of the flexibility of Offense and Defense that Fast Decks have, Slow Decks have a hard time beating Fast Decks. 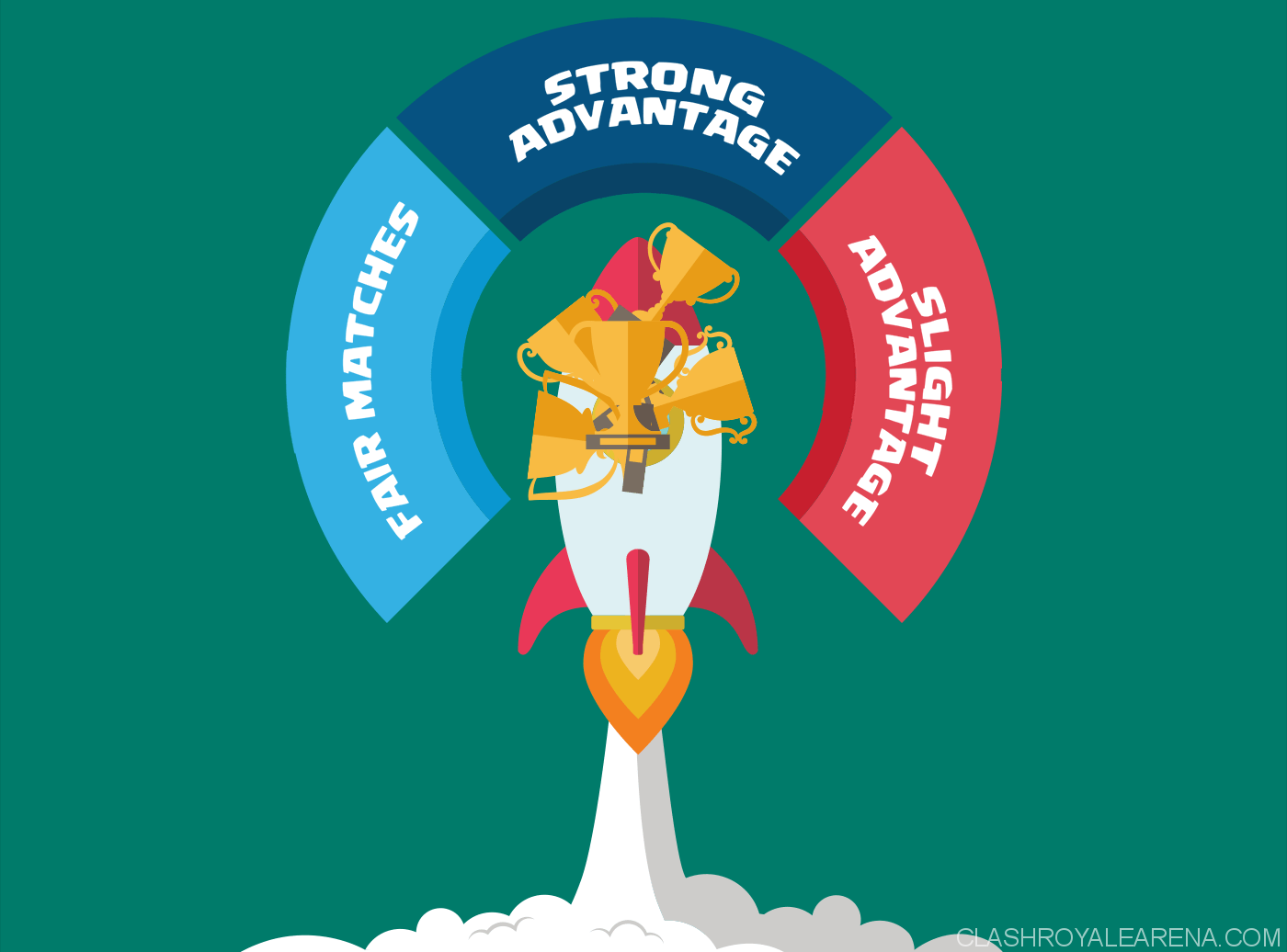 Now that we understand the basics of how different Archetypes and Speeds of decks interact with each other, we have a bigger understanding of why certain decks do a good job at countering others.

Note: Every deck type has 3 decks that it is a Fair Match with, 1 of which is its same Deck Type.

We’ll use Fast Control as an example:

In Fair Matches, it is typically the most skilled player that takes the victory, or the player who makes the fewer number of mistakes. In the ladder, card levels can play a big role in who wins.

A Slight Advantage is where 1 deck is the same as the other deck in 1 of the two triangles, but has the advantage in the other triangle.

Once again, we’ll use Fast Control as the example:

Slight Disadvantages can definitely be overcome with skill, especially if you realize you’re at a disadvantage and you adapt your gameplay to overcome the it. 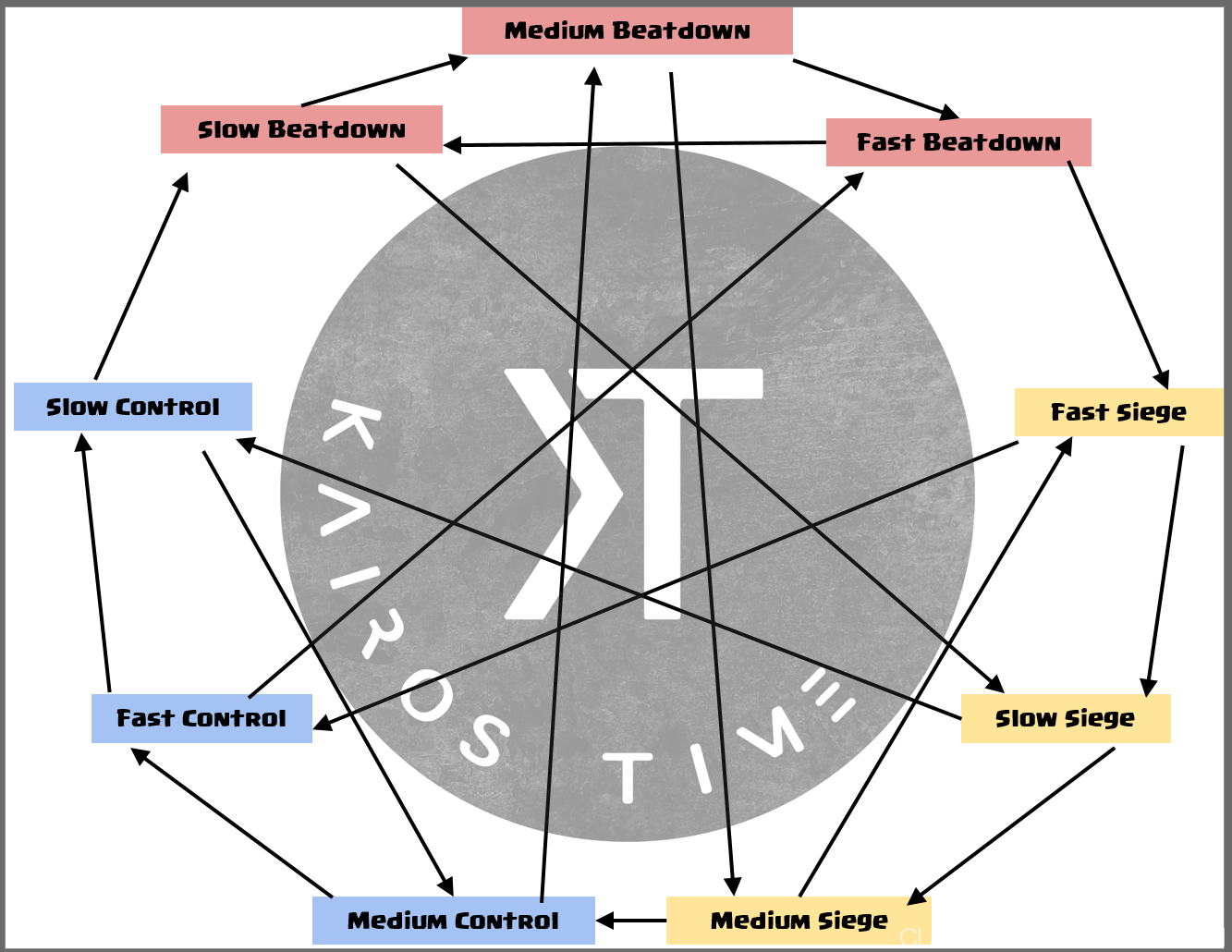 For a printable version of all of the Fair Trades, Slight Advantages, and Strong Advantages on one sheet, you can find one here.

A Strong Advantage is when 1 deck has both an Archetype Advantage and a Speed Advantage over the other deck.

For example, a Fast Control deck is a really tough matchup for a Slow Beatdown deck because Fast has a Speed Advantage over Slow, and Control has an Archetype Advantage over Beatdown. This results in a Strong Advantage

Every Deck type has a Strong Advantage and a Weak Advantage to another deck.

Strong Advantages can still be overcome by skill, but it takes a lot of effort to do so. There is a 3rd and final puzzle piece that I’ll talk about later in this strategy guide that will help you overcome Strong Advantages.

Simply having an Archetype Advantage and a Speed Advantage simply isn’t enough when it comes to winning your matches. On top of Skill-Level, there is 1 big exception that you can actually use to your advantage to overcome the disadvantages your deck might have according to the Two Triangle Theory.

The Card Counter Exception is this: A deck may have an advantage over another deck despite Archetype and Speed Disadvantages if its cards are good counters to the cards in the other deck. This means that you can still beat an opponent who has a Strong Advantage without much effort because your cards simply counter your opponent’s cards.

For example, let’s say you are running a Fast Beatdown Giant Cycle Deck (Clash With Ash recently featured a Fast Beatdown deck on his channel with 44 straight wins in GC’s that you can see here). And let’s say you are facing a Slow Control 3 Musketeer Pump Deck. Because Slow Control has the Archetype and Speed advantage over Fast Beatdown decks, it should theoretically be difficult for you to overcome your opponent without a lot of skill and excellent timing and placement. BUT, if you have the Lightning in your deck, or Fireball + The Log, the matchup is going to be much easier for you because you have cards that do an excellent job at countering your opponent’s main Win Condition, the Three Musketeers.

The Card Counter Exception plays a huge role when it comes to Unity Decks, decks that focus on one main utility in order to make their deck stronger and weaker depending on their opponent’s deck.

For more information, read my guide on Deck Building Fundamentals!

One example may be a Spell-Bait decks (Fast Control Unity Deck) facing against a Slow Beatdown Deck that carries a lot of splash cards in it. Even though the Spell-Bait deck has the Archetype and Speed Advantage, the deck is going to have a hard time against their opponent simply because the cards in the Slow Beatdown deck do such a good job at countering swarm cards. 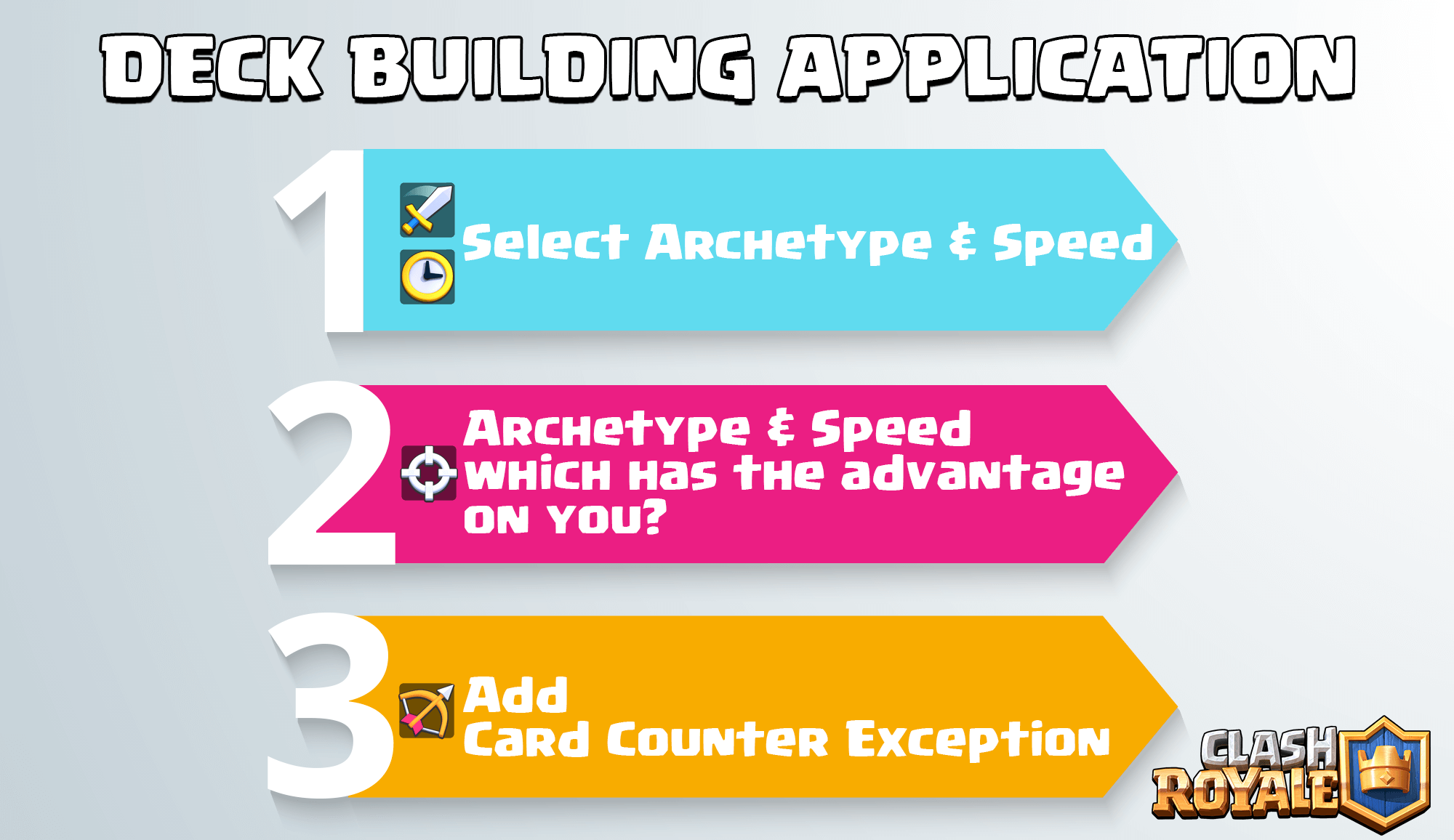 I am not going to cover everything about building decks in this Strategy Guide because I’m planning on doing a future Strategy Guide on How to Build the Best Decks. But, I did want to briefly cover how you can use The Two Triangle Theory to build a deck that is solid enough to stand tall in any meta.

To start off, you’ll want to examine the current meta in whichever area of the game you plan on building the deck for (Ladder, Challenges, etc.). In any meta, there will be a little of every Speed, and probably a little of every Archetype, but the meta will usually have a somewhat of a theme. If you can determine the theme, whether there be more fast decks in general, or more control decks in general, you can select a deck Archetype and Speed that does a good job at countering those themes.

This should result in you having a solid deck that you can use to beat any deck, regardless of its Archetype or Speed.

For example, several metas back, I started noticing a lot of Fast or Medium decks and a lot of Control or Beatdown decks in the ladder around my trophy range. I took an Xbow deck that a clan-mate was having success with and modified it to do a better job at countering the current meta. Since my deck was a Medium Siege deck, I knew I most likely wasn’t going to have an issue with Fast or Medium Control Decks, and so I focused on the making sure I could do a good job at countering Medium or Slow Beatdown Decks. By including the Inferno Tower and the Skeleton Army, I had 1 hard counter and 1 soft counter to all Medium and Slow Beatdown Decks. By following this process, I had a deck that countered a good part of the meta, and could handle situations where I should have been at a disadvantage.

With a firm grasp of the Two Triangle Theory and The Card Counter Exception, you now have a better understanding of why certain decks do a better job at countering other decks, and how you can use it to Counter Every Deck in Clash Royale!

Thanks so much for reading this guide! If you’re interested in learning more, make sure to subscribe to my YouTube Channel so you can be the first to see my guides. If you have any questions, feel free to leave them as comments on my video and I’ll get back to you as soon as I can!

Want to be a part of a group of people who love Clash Royale as much as you do? We probably have what you’re looking for in the Kairos Kingdom Community Discord Server! Join Today!