People are using Three Musketeers a lot these days, making it from a ‘underused’ card to a top win condition.

It’s not only because of their potentials, it’s also because so many people still don’t know how to deal with Three Musketeers properly… 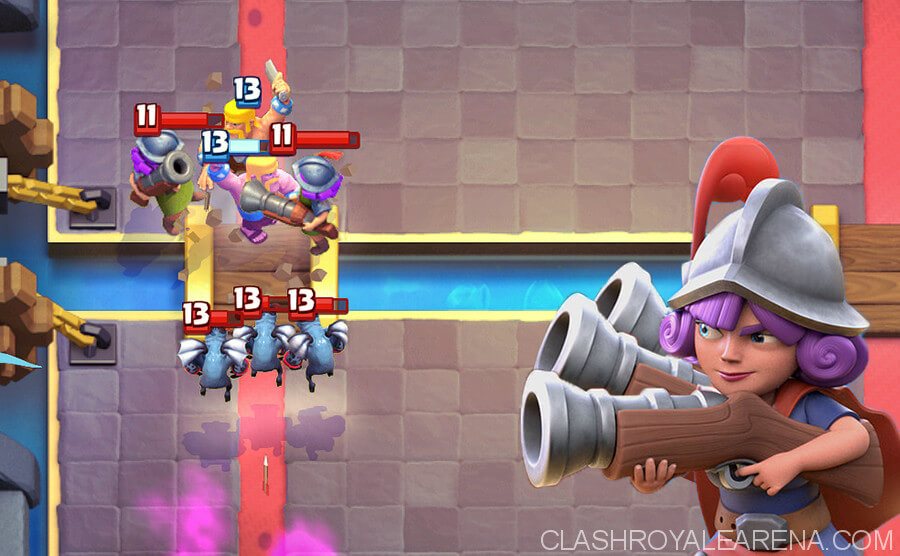 Take a look at your deck first

Since most 3M decks come with Elixir Collector, you should have at least 1 hard counter to it. Also, make sure you have at least 2 counters to the Three Musketeers and their combo.

This might sound a lot but to be honest, 3M and Elixir Collector have a pretty wide range of counters… Just find out those counters and the ways to use them then you are good to go!

Let’s use the 2.6 Hog Cycle deck for example!

As you can see, we actually have a wide variety of counters to Three Musketeers here, meaning we should have a good chance at winning. We can even cycle the Fireball to damage both Elixir Collector and Three Musketeers when needed.

Some more tips for you:

It’s the best to think of Three Musketeers as an archetype with several branches, not as a single card.

Some cards work very well against both 3M and their companions, such as Battle Ram or Knight.

Tier S (The best of the best, include in your deck if you can)

The Log has the ability to do massive area damage, push back all troops immediately when your opponent has a huge death ball push with bridge spam cards.

Use it on their push to deal damage and pay more time for your defending troops.

In the current meta, it’s obvious to see that P.E.K.K.A is the best answer to 3M and bridge spam.

Use P.E.K.K.A to deal with the over-committed side.

Tier A (Definitely great additions to your deck, but can be outplayed)

Play this as soon as possible before the opponent drops Battle Ram.

Same as Fireball but a lot better at dealing with huge pushes. Requires some good skills tho.

Group everything. Works great with Fireball.

Use it on offense to prevent counterpushing.

Always place her on top of the opponents!

Can be used to deal with 2 Musketeers very effectively. Works well vs Battle Ram.

Just watch out for Ice Spirit.

Remember to place him behind your Tower tho.

Tier B (Still good options, but are risky or not as effective)

Use Bowler instead unless he is level 1.

How can we forget this guy?

Great vs almost any 3M push. However, a bit easy to deal with.

In case you don’t have Barbarians…

Needs to be overleveled or you will need to weaken the Musketeers first.

Lumberjack doesn’t have good HP. Needs to be overleveled otherwise you need to damage the 3M first.

Depending on your other support cards… If you have enough DPS, use him!

Depending on their push. You should use Musketeer instead because she is great vs both deathball and spread out.

In case your opponent doesn’t have Log or Zap…

In case your opponent doesn’t have Log or Zap…

Good vs 1 Musketeer. Not a bad choice.

Good vs Battle Ram or 1 Musketeer.

Do you have any other tips on countering Three Musketeers? Don’t hesitate to share it with us!