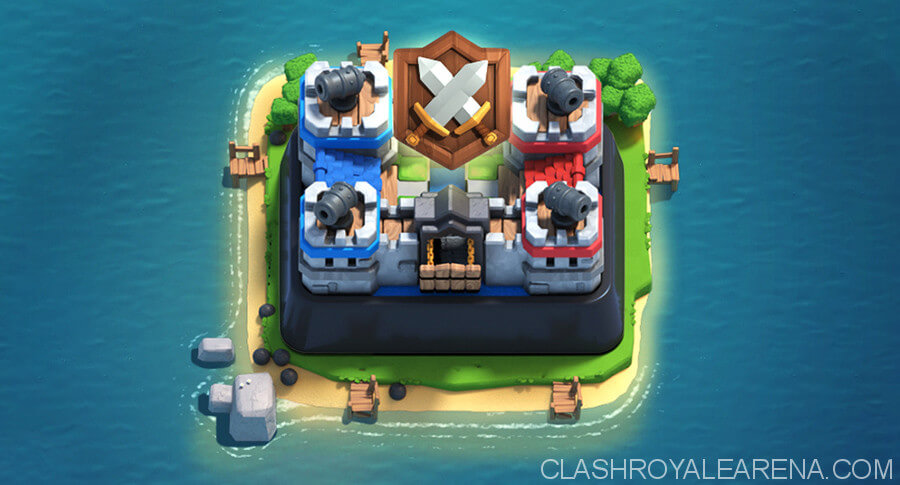 What is Clash Royale Clan Wars?

Clan Wars is the new feature being released in the huge 2018 April update.

The Clan Wars event lasts for 5 days. The whole Clan (50 members) can participate in Clan Wars.

Battle with your Clanmates and gain lots of rewards against other Clans around the world.

What you need to do right now: 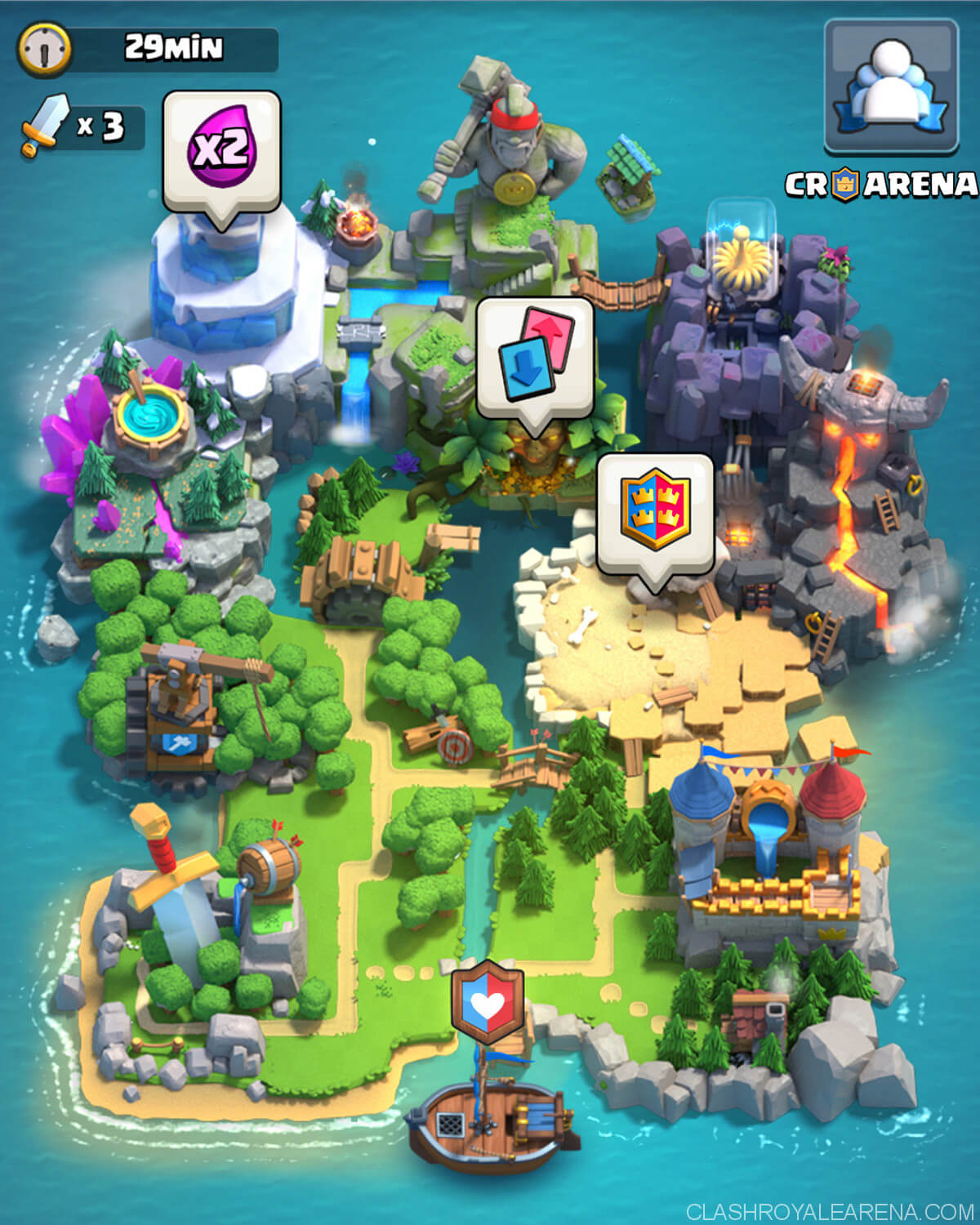 On the first day of the Clan War, do your best to get as many Clan Cards as you can for your Clan.

What is Clan Cards?

Clan Cards are used to build up your War Decks in the Clan Wars. Players can collect the Clan Cards on the preparation day.

Clan Cards will be level up automatically as more cards are collected, no gold required.

The Clan Card levels will be lowered to your own cards level if they are higher than yours.

What is Collection Day?

The first day of the Clash Royale Clan War is the Collection Day. During the first day, you have 3 matches to play in the War Map (screenshot above).

You use your own cards to play on the Collection day.

The number of Clan Cards you can get on the first day based on your Clan War League and your match results.

Tips for the Collection Day 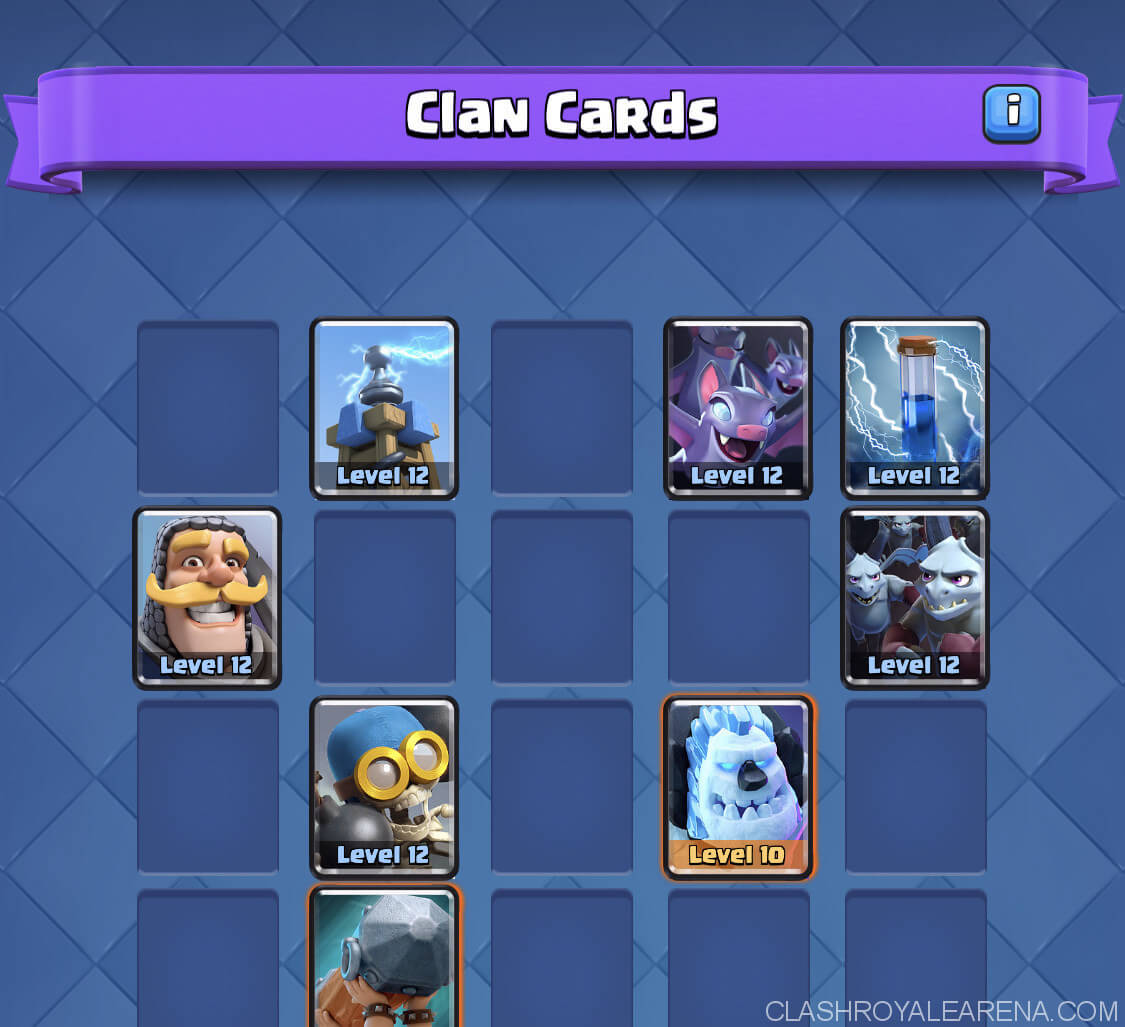 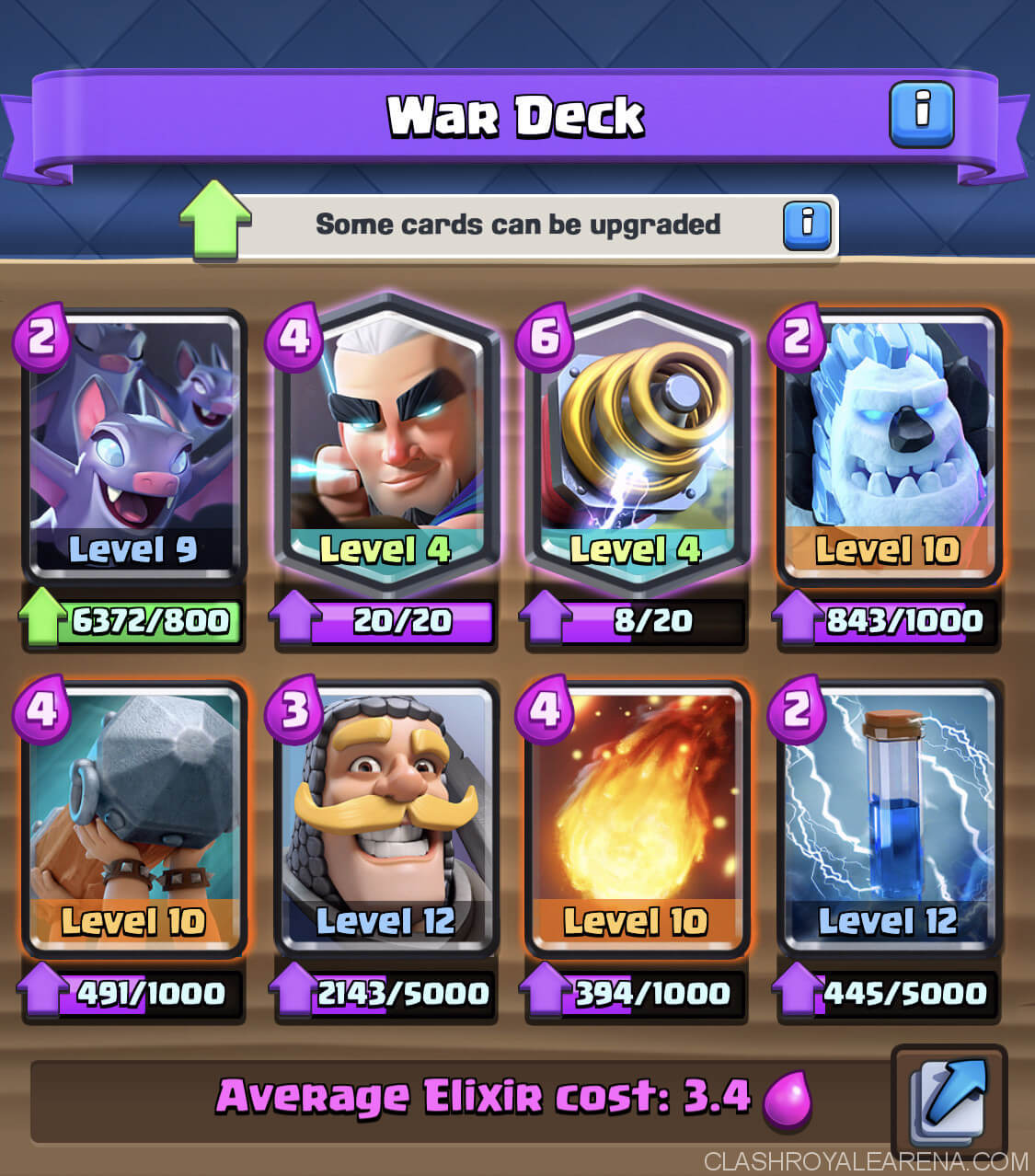 The second day of the Clash Royale Clan Wars is the War Day.

On the War Day, you have to build up a deck based on your Clan Cards.

You can’t use cards you haven’t unlocked yet, and your Clan Card levels can’t be higher higher than your own ones. So consider upgrading your own cards again at here.

Your Clan will get matched against 4 other Clans. Each Clan member has only 1 attack on the War Day using their own decks.

Tips for the War Day 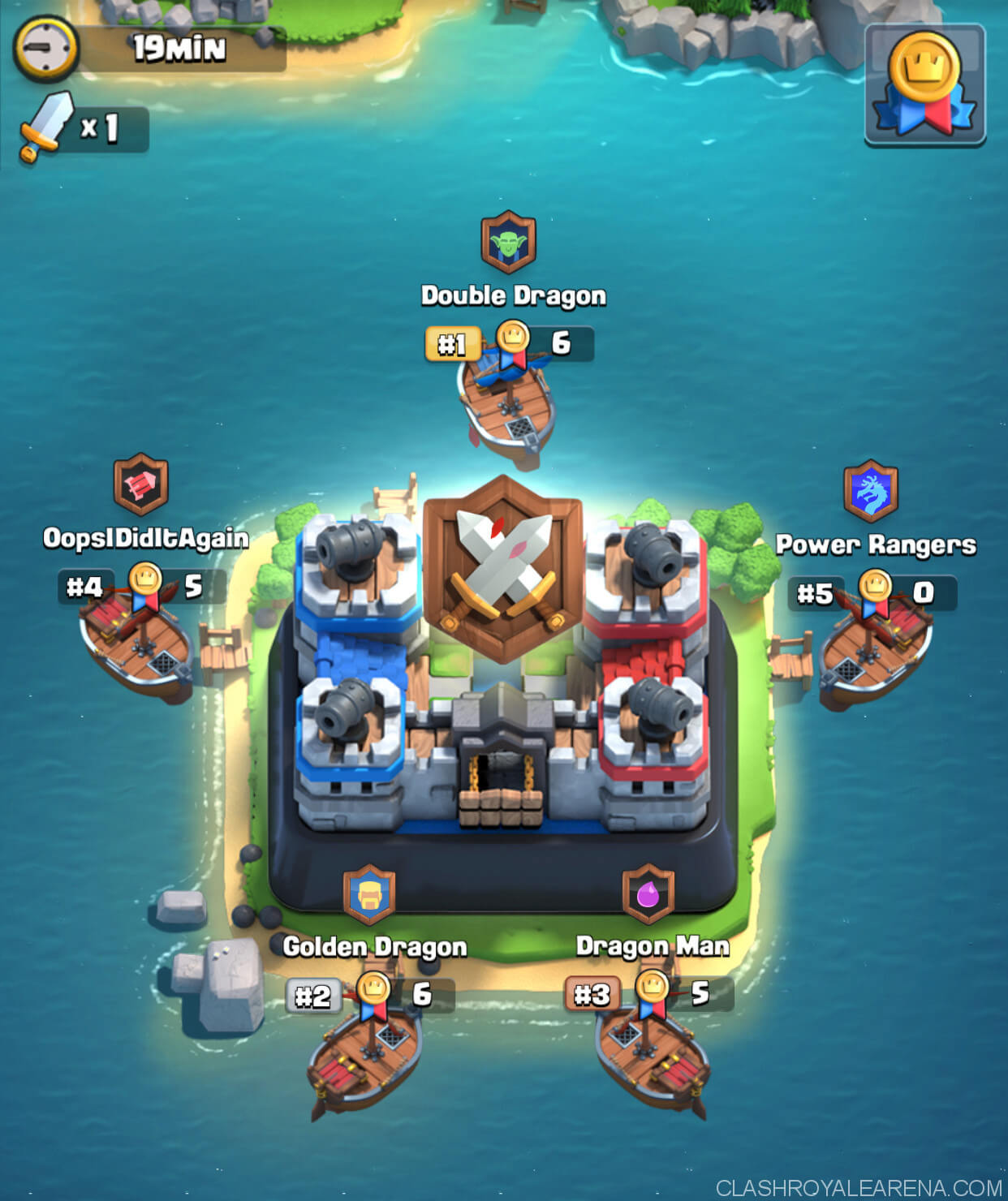 Here are all of the information you need to know about Clan League.

First, you need to pick a win condition based on your favorite archetype.

Pick something you are interested in playing or you are confident that you are good with.

However, before picking the exact win condition, you need to pick out the archetype you want to play!

You will have a tank in general for your main damage output!

You will need to sacrifice tower HP for elixir leads, place and protect a Collector to further this elixir lead (in some decks)!

If you do decide this is the archetype you want to play, here are some notable win conditions for you:

Using Siege decks, you typically want to have a fairly cheap cycle.

You can easily take care of their units within the range of their towers! This can pose many advantages.

The win condition buildings are fairly tanky and can be used on defense as well!

Typically you have more than 1 win condition in this archetype.

You will want to control the pace and the tempo of the game.

Make sure your opponent follows your cycle. And like siege, have a deck that can defend really well at mitigating damage and giving up the least amount of damage possible.

There are two other sub-archetypes in this section are: Cycle and Bait.

Here are some types of Hybrid decks you would want to know about.

Building Deck Around The Win Condition!

Before we get further, I want to explain some terminologies I will be using in the guide

I will address 3 Musketeers separately because though beatdown you would typically play it different to a regular Giant or Golem deck + deck would build differently too!

Consider replacing the #7 or #8 cards with a Collector if your deck is too expensive.

Typically to clear away medium-low HP troops, getting value in the process.

Cheap cards that typically almost always paired up with the Giant.

It can either be a ground troop, or air troop. Should be below 5 Elixir, cheap and have splash damage and.

Typically would be able to deal damage from far away!

This will be your main way of dealing with your opponents heavy cards and their win conditions.

Something that can tank hits from dangerous troops like P.E.K.K.A, Prince etc so your Mini Tank won’t die or your own tank won’t get hit.

Also these guys could be your secondary source of getting damage!

These guys are similar, maybe a slight spell bait but in the air.

I prefer having a cycle but defensive card in my decks that fit this criteria.

That being said you can put in a cycle card here instead of the air swarmy card.

Mainly for dealing with tanks in beatdown decks

Typically for dealing with air threats. Also able to cycle and kill troops from the safety of your side, protecting your X-Bow.

This isn’t the same as your defensive building.

This should be mainly a cycle card but all the same a card that does good DPS and transform into a counterpush.

This is the support for the main Win Condition. For example, If you want to build Giant Miner Deck, use NW for Giant.

If the slot #5 is a ranged card, use a Cycle card here.

Can be single or swarm, depending on the win conditions and the idea of the deck.

Give it a test run!

Now that you’ve built your deck, you will want to give it a test go. Perhaps a challenge, tournament or friendly battle.

When I was testing some decks above, I created a few of them on my own.

I am not saying they will be perfect! Playing a game or two with them will show you where to improve the deck, what to change etc. Know what cards might be better.

Trial and error before you finalize a deck!

Lastly, you will need to make sure you’ve undergone several cycles of trial and error before you finalize your deck.

When you’ve finally finished the deck, just grind away with it. Get used to it’s cards, when to play what etc!

Once you got a good grasp of the deck, winning with it will not be too challenging of a thing to do!