Hey guys it’s Ash and today I’d like to share possibly one of my most interesting and most in-depth Clash Royale strategy guide. 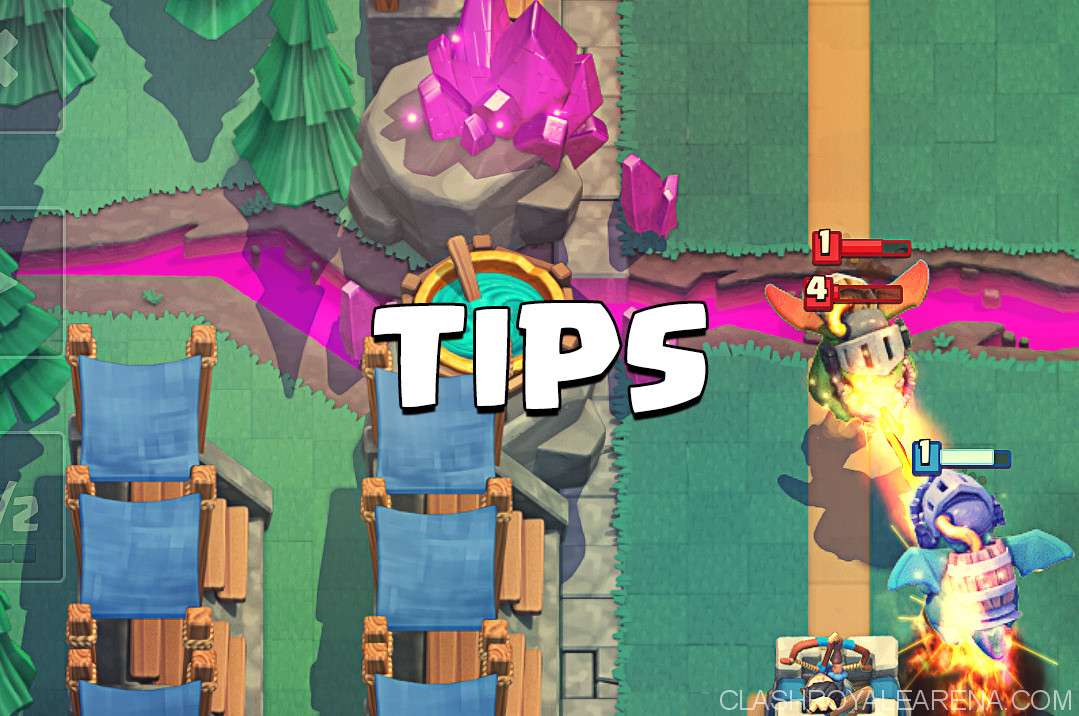 Top 50 Clash Royale Tips for You

As a big fan of the game, I love discovering new strategies and mechanics, so in this video I’m going to share many of the most interesting strategies, secrets, tips, and tricks that I’ve learned throughout my time playing this game.

I’m positive that you’re going to find a lot of these very interesting, and I can guarantee you that not even the best players in the world know many of these.

1. Let’s start with the basics. You can use a troop that only targets buildings to pull opposing troops to other lane, allowing both your Arena Towers to deal a lot more damage.

2. Against a splash attacking troop, you can use a troop with lots of HP to distract it from one side, while you safely use your low HP troops to kill it from behind.

3. Or you can use a swarm card such as Goblins to surround and kill the splash attacker.

6. You can actually counter and pull a Mega Knight to your King’s Tower with just Skeletons and Ice Spirit. Countering a 7 Elixir troop with just 2 Elixir and activating your King.

7. And yes, you can do this with other troops such as Knight or Princess as well.

8. One of my favorite ways of countering a big threat such as a Pekka is by kiting it with Ice Golem while using any ranged attacker, even weak Spear Goblins to safely shoot the Pekka while she’s distracted. You can see that I’ve managed to completely stop the Pekka with Ice Golem and Spear Goblins and without her touching anything.

9. Another favorite way is by using an air attacker while kiting because of course the Pekka can’t touch an air unit. And then after killing the Pekka, I can make a very powerful counterpush while my opponent spent 7 Elixir on the Pekka.

10. Never dash vertically with your Bandit on defense, as this will make her vulnerable to the first attack. However, what’s most interesting is that because the opposing Bandit here re-adjusts her dash in a mere split second towards your Bandit, this allows your Bandit to dash attack first and win the fight without taking any damage.

11. If you deploy the Bowler immediately when the Goblin Barrel’s shadow hits the river, the Bowler can kill all 3 Goblins at once.

12. If you place your Tombstone right in front of the King’s Tower, you can actually completely shut down a Mega Knight.

13. Deploying your Goblin Gang on this tile is the best way to counter the Mega Knight:

14. You can do so many great things with the Tornado card. You can pull a Balloon to the King’s Tower by precisely placing Tornado as the Balloon approaches.

15. Less known fact is that you can pull an Ice Golem let its death damage activate your King.

17. A smart player will use Tornado to pull your Miner to his King’s Tower and activate it. To avoid this, make sure to deploy your Miner in this safe tile, so Tornado cannot pull him to the King.

18. Of course the best counters to Mortar and X-Bow are high HP tanks, but with Tornado you can actually pull those tanks back behind the Arena Tower and have your Mortar or X-Bow re-directed onto their Arena Tower.

19. If you deploy your Goblins like this immediately after your opponent plays Goblin Barrel, you can actually stop all three Goblins and not take any damage (almost).

20. If you deploy your Electro Wizard, right as the shadow of the Goblin Barrel passes the river, you can actually stun all three Goblins.

21. Similarly, if you deploy the Mega Knight this way, you can instantly kill all 3 Goblins without taking any damage!

22. If say you already used your Fireball on something like Barbarians and then your opponent plays Three Musketeers in one lane, as a last resort you can use your Balloon’s death damage and The Log to stop these Musketeers from quickly taking down your tower.

23. You can use Tombstone to completely block a Furnace and the Fire Spirits from touching your tower.

24. Similarly, because Spear Goblins can’t kill Skeletons in one hit, you can also use Tombstone to block a Goblin Hut.

25. You can also use Tombstone to block a Princess, preventing her from moving forward for as long as the Tombstone is in play.

26. And similarly, you can use the Tombstone to also completely block a Mortar. The Tombstone has a lot of unique and useful properties.

27. It’s better to deploy your tank at the center on the opposite lane of the Mortar, as this will not only distract the Mortar throughout it’s lifetime, but you can also completely ignore it while not have to counter it. If the Giant gets too close to the Mortar of course, the Mortar can shoot your Arena Tower because of the blindspot.

28. It’s best to deploy your Archers right in front of your Arena Tower to counter a Goblin Barrel. This will allow your two Archers to block two Goblins, so you only take 1 hit from 1 Goblin.

29. If the Giant Skeleton manages to lock on your tower, you can use a troop that only targets buildings such as Ice Golem to redirect the Giant Skeleton’s target on the Ice Golem and have it follow it, allowing you to also prevent getting hit by his massive bomb damage.

30. Zap has so many useful properties. One of the sneakiest ways to use Zap is by using it to re-direct the Arena Tower’s attack on the Graveyard Skeletons, allowing your Mega Minion to deal a massive amount of damage. You can use this Zap re-direct strategy in a countless number of ways.

31. You pull threats such as Battle Ram or Giant while also avoiding big radius spell cards such as Poison or Lightning by placing your Tombstone or Inferno Tower up here.

32. You can completely stop a Goblin Barrel by pre-placing your Dark Prince behind your King’s Tower.

33. You can actually counter the Bandit while also activating your King’s Tower by splitting your Archers and then using an Ice Spirit to pull her to your King.

34. By simultaneously placing your Rocket and Goblin Barrel in this manner, you can hide your Goblin Barrel amidst the Rocket’s fire. However, this isn’t 100% undetectable, as if your opponent does this, you should always look for the shadow of the Goblin Barrel as that would give it away.

35. If you don’t have a counter to the Inferno Dragon in your hand, it’s best to kite it away.

36. If you place your Battle Ram in the 3rd tile from the river, you can kite and distract and move the Mega Knight to the other lane, without taking any damage on your Battle Ram.

37. If you know your opponent has a splash attacker such as Wizard or Executioner, you can place your Miner in this position to distract it while your Minions safely kill it.

38. If your opponent decides to use something like a Pekka to distract your oncoming troops, by placing your Miner behind the tower, you can pull the Pekka back, allowing your troops to lock onto the tower.

39. One very important fact to know is that a lone Balloon can be stopped by simply pulling it to the center in this manner with a building such as a Tombstone. Other than the Balloon’s bomb damage, it will not get a single hit on your tower.

40. If you orient two buildings in this manner, you can actually pull the Balloon to your King’s Tower and activate it.

41. Hog Rider has lots of useful defensive properties. Such as using him here to distract the splash attacker as your Minions safely kill the Executioner.

42. Or you can pull back a troop and allow your Arena Tower to deal more damage to it by having your Hog Rider jump over the river.

43. You can even use a Hog Rider to distract a Bandit, and then use an Ice Spirit to pull the Bandit and activate your King.

44. By deploying your Skeletons and Ice Spirit in this manner, you can actually not only counter the Bandit, but also activate your King’s Tower.

45. If the Royal Giant locks on your tower, then you can place a building on top of it to re-direct its target onto the building instead.

46. By placing a building such as a Tombstone two tiles in front of your Arena Tower, you can not only distract the Royal Giant, but also allow it to pass the bridge and allow your Arena Tower to shoot it while it’s distracted by the building.

47. If you place a building in this position, you will allow a Hog Rider to easily bypass it and deal lots of damage. But, by placing it 1 tile higher, the Hog Rider will not be able to bypass it. This will allow your Tombstone to completely shut down the Hog Rider as both your Arena Towers shoot it.

48. Because the Baby Dragon can fly and has range, you can use him to fly over the bridge and safely take down a Furnace in this position, without getting shot by the Arena Towers.