I have received a lot of requests lately for Clash Royale Arena 6 Deck which uses Elixir Collector and Valkyrie. Luckily I did get an amazing from Zarathustraa last week. After playing with it a few days, I successfully pushed my alt level 7 account from Arena  6 to 2300+ trophies. Want to give it a try? Let’s go! 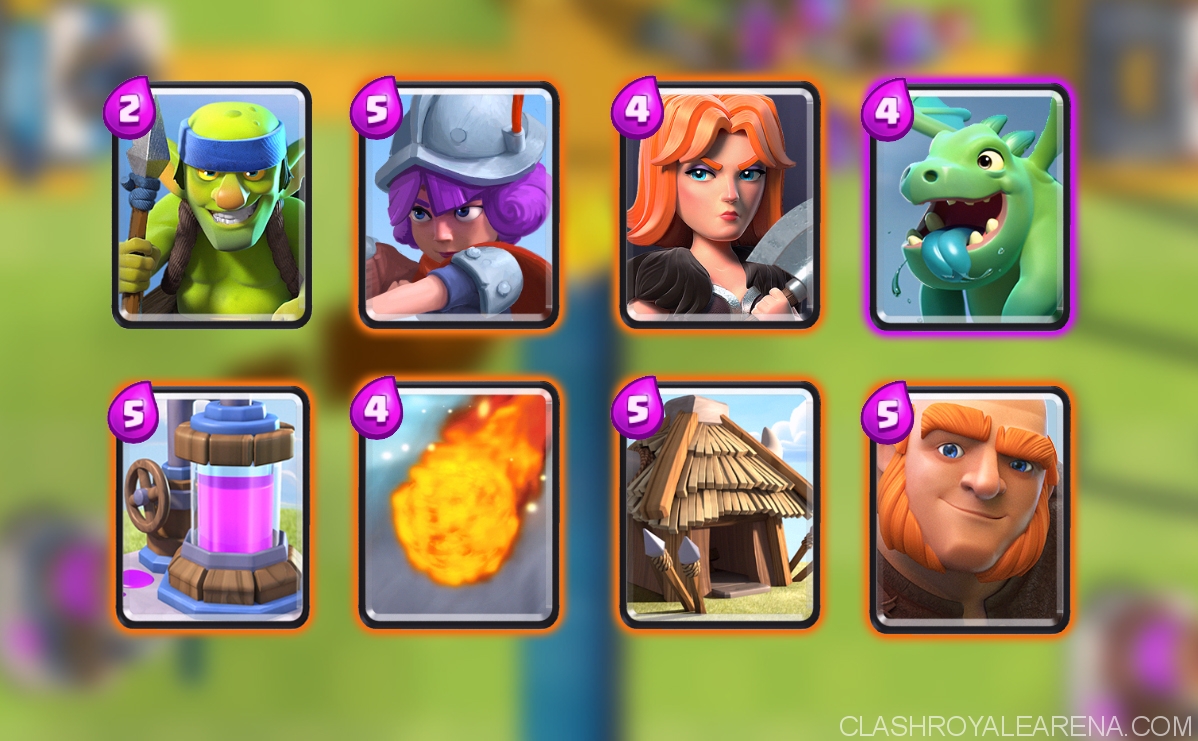 I did try to replace this card with some other ones but they just didn’t work well. You don’t need Arrows in this deck as we have already had a lot of AoE damage options with Valkyrie and Baby Dragon. You don’t want to use Freeze in this deck tho. Goblins and Skeletons are not useful either for the front line, they can’t deal damage from the back line. Other cards are either too slow or too expensive. I tried the Mirror card also and sometimes it worked perfect because of 2 Baby Dragons or 2 Musketeers but it’s just not worth it when you have to spend extra Elixir but receive a lower level card.

Ramp up by using your Goblin Hut and Elixir Collector. But I strongly recommend using the Goblin Hut only when you see your opponent pushing on one side, put your Hut on that lane. Goblin Hut mostly works as a defensive card in this deck and it will help you gain some nice Elixir trades. Beside the Hut, use your Spear Goblins, Baby Dragon, Musketeer and Valkyrie to defend and you always can get positive Elixir trades with them every time. In the last update, Valkyrie HP and damage got increased by 10%, which is awesome!

Some people may want to replace Musketeer with Archers but I think it’s not a good choice as without Musketeer, you don’t have enough damage for a decent push. Also, with the Elixir Collector, building up your push is much faster!

Strong Combos you may want to use:

While your Giant is walking slowly, your Goblin Hut is generating Goblins, which give your push a lot of damage. Even when you have a small combo such as Baby Dragon + Musketeer, you still have decent amount of damage to upset the opponent and buy you more time to reinforce the push.

This deck is all about using Elixir and Goblin Hut to set up your next pushes while defending. Once you successfully defend, use your surviving troops as the momentum to keep reinforcing the pushes. Once the enemy tower is destroyed, you can keep sending more troops or even the Goblin Hut in the opponent’s side, make your push running snowbally! I did get couples of 3 crown wins with this deck yesterday by doing this!

Hog + Freeze is the hardest matchup you will face when using this deck. Yes, it’s one of the most popular combos in this meta game. The most important thing you want to do is to not drop your troops near your Tower but not too far so they can hit the Hog. Also, spread your troops out! Your opponent will have to choose to either freeze Tower or freeze troops. Afterwards, you can place your Giant in front of defensive troops and start the counter push. Your opponent has just spent 8 Elixir for the Hog + Freeze combo and he just can’t defend properly. You may also want to place your Valkyrie If your opponent doesn’t have any air troop on his hand or use Baby Dragon If he has. Just remember to keep a tight balance between your tank and support troops behind!

What to do at the beginning?

This is the strongest starting hand opener of this deck: Elixir Collector + Goblin Hut. You always want to place your Elixir Collector immediately when you have it on your hands at starting. Hold onto your Spear Goblin Hut and don’t place it until your opponent start pushing. In fact, the worst opening hand is one which doesn’t have either Collector or Goblin Hut.