Today I wanted to talk to you about the Clash Royale Arena 5 Deck that I first took to legendary so long ago and did it again last week! I call it “HUT”. Why is it called HUT? Because people hate Hut decks…and it uses Huts. Before we get into playing HUT, let’s break it down card by card! 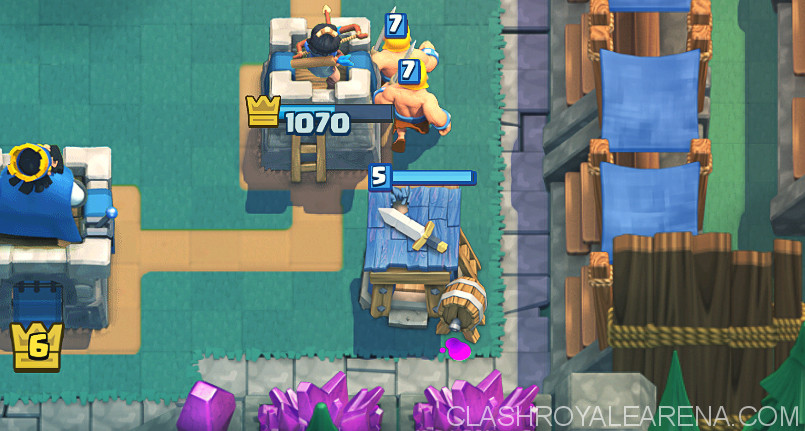 I want to let you know that I try to break down my decks by siloing the cards into two categories: Staples and Complimentary/Utility cards. Staple cards will not be changed out; they are a mainstay in the deck and pivotal to its effectiveness. Complimentary/utility cards can be rotated out to fit the Meta.

So let’s get into it! First up are the staple cards. Again, these are mainstays in the deck and will not be rotated out.


Placement: Corners. Right next to your King Tower.

Just so you readers know, I can feel your blood starting to boil. And I love it.

Goblin Hut is a solid Tower unit that spawns spear-chucking minions every few seconds. Goblin Hut has good survivability (only dies to Rocket), is a great counter to cards like Lava Hound, and forces your opponent to burn Elixir to deal with it. Only play at the start of a match if your opponent drops a high Elixir tank or you have Barbarian Hut (or another defensive card) on your board (or in your hand).


Placement: Defensively. Behind Tower. Towards middle / sides of the map.

Ice Wizard isn’t the most dominating legendary card, but it is arguably the most versatile. It is a phenomenal defensive card with great survivability and serves some offensive purpose. You can also cycle Ice Wizard to help you find cards for different situations and not completely loose value with his defensive presence. Used best as a means to support Towers and units that are already engaged in fights.


Placement: Behind your Tower or in front of over-committed push. At the bridge for a counter push.

Giant is one of the main damage dealers in this Clash Royale Arena 5 Deck. Even with the health and damage nerf, Giant is still an incredibly viable tank at 5 Elixir. In the late game, use Giant as protection for your minions to spill over the bridge and swarm your opponents Towers. Defensively, Giant is one of the most important cards in this deck. Use giant as a way to divide your opponent’s push at the bridge. An example being:

Your opponent drops a large tank (Golem, Lava Hound, Etc) with support units behind it. As the tank crosses the bridge and is engaged by your Tower and huts, you drop your Giant behind the tank to isolate your opponent’s support on the other side of the bridge. Now your minions and Tower get to quickly make work of the tank without interference. This should buy you enough time to destroy the tank and then have your minions engage the enemy support units as they finish you’re your Giant.

I will also use Giant in place of my central defensive hut (Barbarian Hut/Tombstone) if neither is available. If my opponent pushes (with a minion that targets other minions) and I don’t have a defensive Tower available, I will drop Giant in the middle of the map to pull agro and allow my Tower to kill the unit(s) while I gain Elixir and cycle to the needed card.

Good right now because there is less Inferno Tower.

Placement: Center map. 3-4 tiles up from King Tower to either the left or right side.

Ideally, you want this card in your hand at the start of the match. If you don’t have it, you need to try to cycle to it. This will stop an early Hog Rider rush, Royal Giant rush, etc. It is arguably the most pivotal position in this Clash Royale Arena 5 Deck as it acts like a rudder, steering your opponent one way or the other and can split the map in two to make your opponent spread out their resources.

Sometimes you’ll have your Barbarian Hut and Goblin Hut pushing a single lane. If your opponent plays minions with large splash damage (Bomber, Wizard, Etc), don’t waste too much time pounding your head against the wall by continuously sending your Barbarians and Goblins down the same lane, only to bottleneck at the bridge, and neutralized by a single minion.

Split the map in two by slightly shifting your Barbarian placement to the other side of the map or switch sides with your Goblin Hut in order to push two separate lanes. This will make your opponent spread out his resources and eventually give you the advantage as you work one side or the other.

Location: Anywhere on top of the enemy!

I love these little goofballs. Not as good post nerf (four skeletons to three) but still amazingly effective on cards like Miner or as a means to pull enemy minions. Skeletons can also be a sneaky way to do some impressive damage to tanks or unsuspecting minions engaged with other minions.

Right now arrows is more versatile than Zap as it kills the princess, minion horde, and other bunches of small annoying creatures!

Solid utility spell for almost any Clash Royale Arena 5 Deck. Great for resetting enemies. Great for stopping Goblin Barrels. If high enough level, Zap can wipe out Skeleton Army, Minion Horde, etc. I strongly recommend you take a look at this guide for more details about this card!

A powerful long-range unit, Musketeer is great on offense and defense. Very solid damage with a high rate of fire allows for great flexibility – just make sure that she is protected!

“Bend but don’t break” is the mantra of this Clash Royale Arena 5 Deck. Your opponent will more than likely pressure you —don’t panic. Don’t overspend Elixir to save a few points of damage on your Tower. Setting up your defense is the most pivotal part of playing this deck.

Treat your Tower health as a resource. There will be times where you will sacrifice multiple hits to your Tower (make sure it isn’t by P.E.K.K.A/Mini-P.E.K.K.A…), but know that you will win many games by the skin of your teeth! If you stay the course, play patiently, and know when to push – you can easily hit legend with this deck (and make plenty of enemies along the way!)

I hope you all enjoyed my write up on my newest deck! The deck is a lot of fun, different, and open to interpretation. Keep checking in as I plan to contribute as much ass possible. Be sure to follow me on Twitter @peterlivingston and especially my gaming YouTube Channel.