Are you looking for an easy to use Clash Royale Arena 3 Deck which help you deals with high level players easily? Yeah, use this one!

Hey guys, I’m Deepzai and today I am going to show you my Clash Royale Arena 3 Deck for Balloon and Giant. A few days ago, I saw another Balloon deck but it requires the Ice Wizard and I don’t have any. I’m along the train. No Legendaries. It sucks doesn’t it? Everyone around you getting Legendary arena, but you’re the only who can’t get there because you don’t even have a Legendary. Let’s change that. I started using this deck at 2100 and within 2 weeks (casually playing) I climbed to Legendary Arena today! This is my Clash Royale best deck! 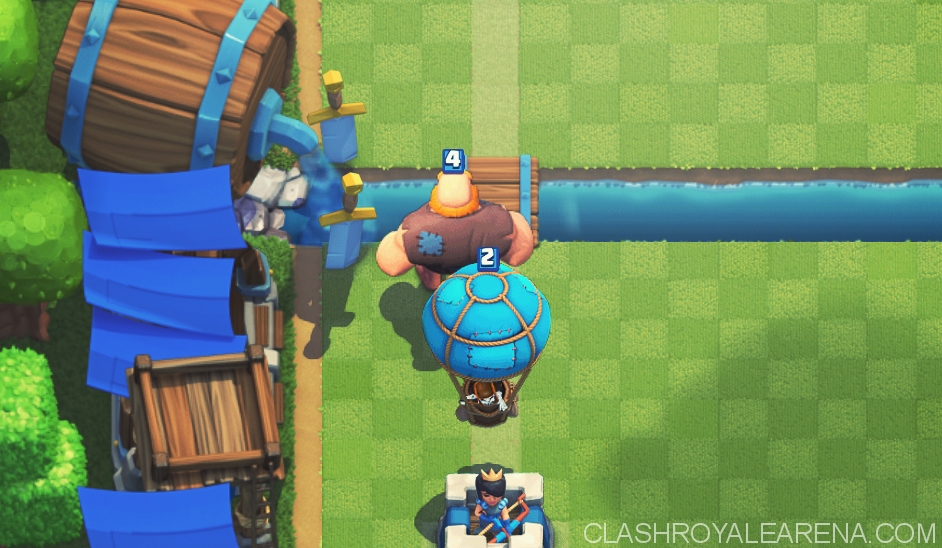 The Best Clash Royale Arena 3 Deck with Giant and Balloon

I won’t be going over this, because M4SON’s guide explains everything about this Clash Royale Arena 3 Deck perfectly. I highly recommend reading guides on Clash Royale Arena because there are extremely valuable tips and special tricks to this deck.

I’ll be going over the general threats/counters to this deck.

Witch: Skeletons can be used (surround) if sent in alone. If sent in with tank, barbarians can kill the witch and the tank.

Baby Dragon: Musketeer. Easy. Be aware of it’s AOE damage on your barbarians if you have them out.

Valkyrie: Can be stopped by musketeer (either drag to middle) or straight up duel.

Spawner Decks: You can either fireball spawners/huts (not recommended) or defend with cannon/other small troops and push with giant balloon.

Giant Skeleton: Drag with skellies/cannon, try not to use barbarians unless absolutely necessary.

Hogs: Duh. Cannon. If they fireball/zap it, use skellies (AFTER the zap).

Mortar: Mortar decks are weaker than they used to be, your giant/balloon can take it out easily.

3 Musketeers: If you know the enemy has this, do NOT fireball enemy barbarians if they have it. Save your fireball. You may need to fireball+zap if your fireball fails to kill it.

Royal Giant: Use barbarians/skellies to kill it, cannon to draw the aggro.

Double Prince: Giant can be used to tank initial damage, musketeer is good for killing the princes, barbarian can also be used after dp charge is gone.

Freeze: Oh well. In order to do a successful push if the enemy has freeze is to build a large enough push in which your giant will survive and so will your balloon.

Inferno Tower: One of the biggest counter to this deck IMO. Try and play for a draw. You can still go for a win if you surround your giant with barbarians and go for a balloon push.

Lava Hound decks w/ Balloon / Minions: The second you see the opponent place their lava hound down, it’s time for you to push the opposite lane! You can use cannon to slow down the lava hound because it does minuscule damage. You can use arrows on the lava pups because fireball is still there for minion hordes. If the opponent has a balloon use your musketeer on the balloon instead.

Ice Wizard: Can be stopped by one-elixir skellies if sent by itself. This card is annoying to deal with. It can single handedly stop your entire push so either bait the ice wizard with your barbarians after a successful defense, or fireball it while pushing to either change aggro/stop it’s slow for a second.

Princess: Can be stopped by skellies (precise timing) and arrows. (lvl8 arrows kill lvl1, etc). Use musketeer when you are forced to. (e.g. you don’t have fireball but have arrows and you know they have a minion horde).

Sparky: Annoying but easy to counter. Surround with one-elixir skellies or barbarians. Be careful of his other troops! You can even use giant to tank 2 sparky shots.

Okay guys thank you so much for reading this guide! Hopefully you have found this Clash Royale Arena 3 Deck of Giant and Balloon useful! Don’t hesitate to ask me anything about this deck! You rock!