Hello fellow clashers, and welcome to a new guide.

My name is Norbysweg, and I’m bringing you a huge, comprehensive, easy-to-follow guide on one of the most stable and one of the most powerful deck that ever existed: Log Bait. 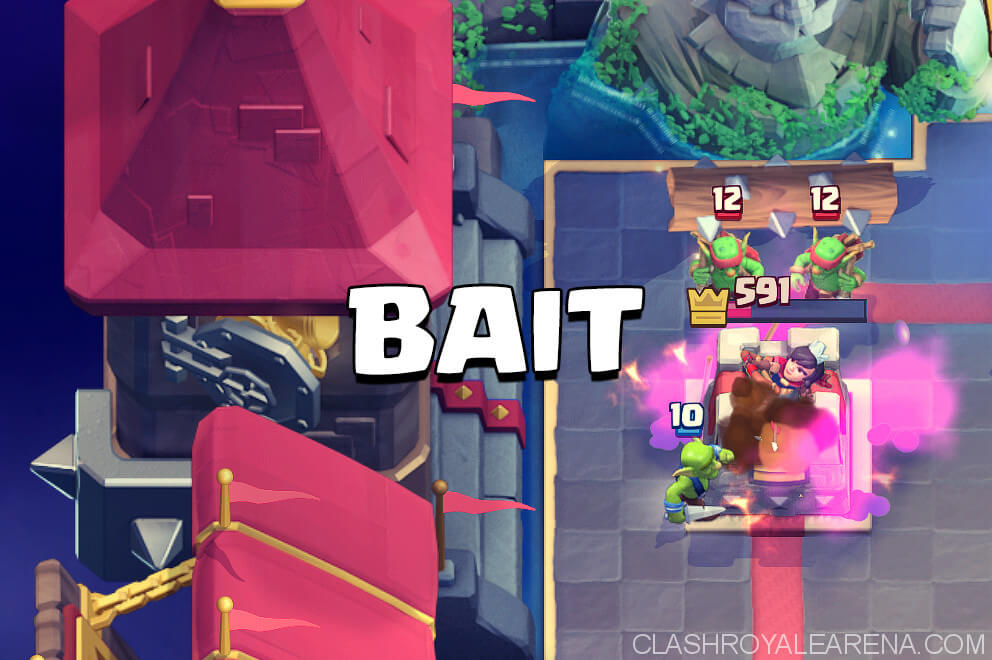 Log bait was supposed to be derived by the Miner Barrel chip deck by Adam, but it’s unknown really, because the first variation had Dart Goblin, or even Mirror Rocket!

By the addition of the Goblin Gang a year ago, chip decks were all over the place, and they were extremely hard to stop.

A few days past the meta, the basic variation of Log bait we all know was made: It had Inferno Tower, Princess and Rocket, at a 3.3 average cost.

It took a long time for the basic variation to be recognized and used, but its true shine was shown in the bridge spam meta. It remained a stable through both CCGS tournaments.

Near the end of CCGS, especially in the MK Hog meta, Log bait Tornado was made up, to counter Hog more easily and also do better versus a Mirror matchup.

Although all the bait versions have the same mentality, I’m going to go over all of them, their playstyle, their pros and cons, their matchups, and every little tech element that is essential for a flawless performance.

Miner Skeleton Army mHorde Princess Infernotower Fireball Zap GBarrel – Probably the oldest version that was truly reliable and was ever used in competitive play. Skeleton Army can be switched out for Gobgang for more versatility.

Throughout this guide I’ll be going through the most powerful and well known version of bait, the Princess Rocket one.

It’s been a year and Knight is still one of the most used cards and definitely one of the best common cards.

He counters a variety of cards alone, and he synergizes perfectly with the rest of the deck, making him a great choice in any bait deck you might think about.

Your main defensive and control card, the Princess is definitely a tough anti-swarm and also an offensive option.

She has been a crucial card in most of the metas, with such a versatility and variety of decks she can be used in, that she was even considered the best card in the game once.

Your secondary offensive option, the Goblin Gang is usually used to bait out spells, but in some cases you might want to bait your opponent’s spell out and attack with the Goblin Gang, mostly to pressure.

Talking about defensive purposes, this card gets most of the job done with its splitting mechanic and easy tech.

Your main offensive option. I will talk about its tech later.

The Barrel is mostly used in bait decks because it does (almost) instant damage, like the Miner in the Mortar bait deck for example.

Your anti tank defense cards, they are highly versatile and powerful, especially the Tornado.

Your so-called secondary win condition, Rocket cycling can definitely be an option at low-HP towers, and also a stable Pump killer or push destroyer.

The extreme utility card, the Ice Spirit offers insane value for only 1 Elixir, and can make the difference in many battles.

It denies a Skeleton Barrel, it tanks two Princess shots, it tanks a lot for the Goblin Barrel, and it kills a Hunter, a Musketeer, Archers, and has countless more uses.

You know how to get the best value out of it, right?

The early game is only about getting a feel about your opponent’s deck and dealing chip damage in the best case.

Your best starting plays are either a Goblin Barrel on the Tower, either a cycle Ice Spirit, a split Gob Gang or a Princess at the back.

As the match goes on, you’ll want to defend as well as possible and get a few Goblin stabs in, while passively inviting your opponent to attack.

In most cases, your opponent will share the same playstyle as you, so don’t always expect an all-in rush in the first minute.

All you have to do is passively build up your side and limit his defending moves with your control cards.

What I’ve learnt in many games played is that the more control you apply on the map, the more likely you’re gonna get damage in and win the game.

Remember: This deck focuses mainly on defense and counterpushing after, and less on the actual Barrel chip.

It’s somehow a fusion between the Furnace Bowler bait deck and the Miner Barrel one.

Your goal is to get as many Princesses down on the map and control your side as well as possible.

That is probably the biggest goal and most important one you have to achieve while playing bait.

Out of experience, I can say that the killing blows are always the counterpushes, because your annoyingly efficient defense will make them overextend subconsciously, thus leading to you counterpushing with a few Goblins and also a Barrel, having not only a Zap-bait defense, but a Zap-bait chip offense.

In most of the cases a counterpush can be turned into a split push, which distracts your enemy from the major danger, so your Barrel might get an extra 2-3 swings in this case.

The Basics of Rocket cycling 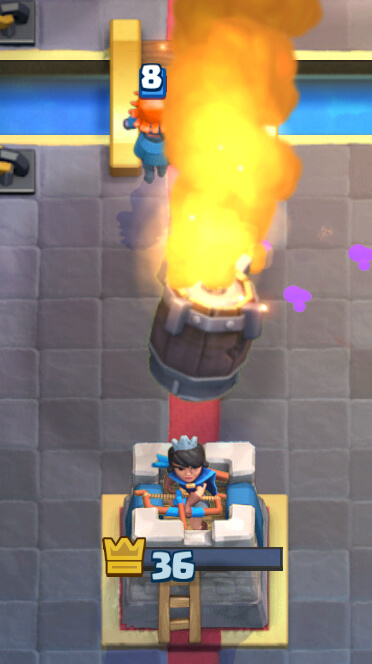 Rocket cycling is of course an important aspect of Classic Log-bait.

When that aspect comes into your mind through a game, Rocket cycling comes into play.

You should always remember your killcount (515 at tournament standard), which equals the direct damage you can get in with your spells, in this case a Rocket+Log.

That doesn’t mean you should cycle both, only on decent value.

In single Elixir time, empty Rocket on Tower is highly denied, as I would only recommend rocketing 4<Elixir cards near Tower.

Although Double Elixir time changes this completely. You can Rocket cycle freely if the opponent doesn’t have one of these decks, or if you seem to have an Elixir advantage and an above average control over him, and only at a <1500 HP range:

Pretty cool right? You can Rocket cycle most matchups out! 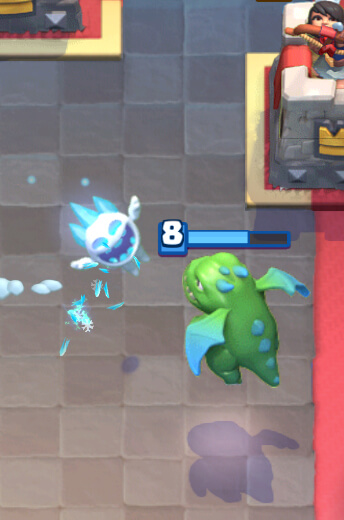 Pretty simple, but makes a lot of difference in-game.

Do you know the correct placement to entirely kill a Skelly Barrel with an Ice Spirit? At the back of the Tower when the Barrel is one tile from your Tower.

Do you know how to deny an entire offensive Goblin Gang? At the back of the Gang, before they lock on.

Do you know the optimal placement to kite a Mortar away? Four tiles in front of King Tower, 1 tile in the other lane

An extremely important aspect of playing Log bait is to get the most value out of your defense so you have extra Elixir to pressure or Rocket.

Below is a video made by nichrome, where the best Tornado tech is shown. 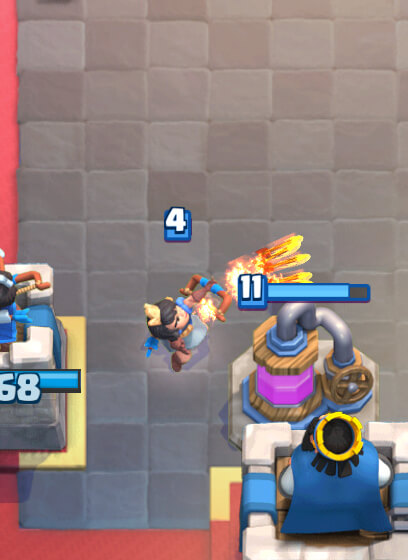 Using the Princess accordingly is a huge part of the gameplay, as a correct placement can make a huge difference between a win and a loss.

It’s important to know that the Princess should always be placed on the opposite lane you’re defending on.

This way every spell gets so much less value, and it really takes advantage of her insane range.

With the Skelly Barrel being such a popular card, it’s good to know that the Princess can one shot it, when placed exactly when the Barrel is 1 tile away from your Tower.

Maintaining the control is an important aspect of bait, but an offensive Princess can count a lot if you know your opponent inside out.

A Princess and an Ice Spirit can mostly result in three shots, also a Princess and a Tesla (another bait variation, replaced with Inferno Tower or nado) can offer pretty great value when your opponent is choking on your control.

Maybe the most important aspect of offense, you want to get to know all your opponent’s counters and play them out the best way possible.

It’s pretty simple working, and I will show it now.

If your opponent uses Log, Zap, or Fireball to counter the Barrel regularly, The only thing you can do is outcycle their spell, or do a juke Barrel, 3 tiles above the center of the Tower. Always make sure they have their spell in cycle when you throw the juke, so you don’t get shanked by an Ice Spirit.

If your opponent uses Tornado to counter, you have to be a little smarter.

There are three possible patterns he can counter your Barrel with his nado, the one is when he tornadoes them to the back of the Tower, and the next two are like this: 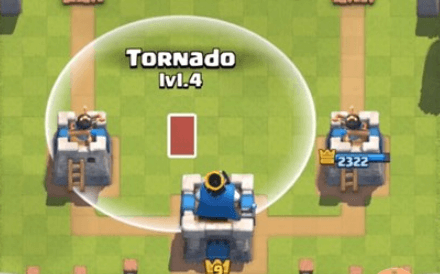 But these two can be played towards the other side too!

If your opponent counters with Goblin Gang and places them in the back, throw your Barrel in the front. If they place it late, on the side of the Tower, throw them on the side closer to the other arena Tower, on the lower corner of the arena Tower.

Doesn’t happen quite often, but it’s a good thing to know that you can take out the Pump with a Barrel.

If you suspect they might be playing Three Musks, Predict Log so you can kill their Goblin Gang (only if it’s a Pump in front). Essentially, you want to pressure efficiently, so they can’t get spell value on your punish.

Always use Knight, and Goblin Gang if possible.

The playstyle applies to most matchups, although you might want to consider these tips against the most common ones.

Always have Princess control, and always Log their Princess, because you have the Tornado!

Always keep it for defending barrels, and never go too aggressive early.

Once Double Elixir kicks in and you’re sure in your Princess control, you can start Rocket-cycling.

Always save your Rocket to kill the Balloon, and always be super cautious with using Tornado.

Their Goblin Gang is the only reliable Barrel counter, so send your barrels in front.

Princesses are your best weapon against this.

Always save your Goblin Gang or Knight to address their miners on your Princess, and never go all-in with a Knight push if they have Elixir for Mega Knight.

Remember to Rocket cycle once their Tower is at <900 HP, or just defend and block their Miner.

Something you might want to consider is throwing your Barrel in front, so a MK in the back can’t splash them all.

Indisputably one of the easiest matchup you can go against, you can Rocket cycle early and defend quite well with the Tornado, but always kill the Hog tank first, otherwise Tornado won’t pull it!

This is where ground pushes and Princess control matter the most.

You have to watch out and not lose any Tower, and the most important aspect is to punish with a ground push, in order to result maximum pressure and damage, especially because they can’t counter that with cards such as Mega Minion or Night Witch.

As for the push, pray to have a chance to Tornado the Golem onto your king, and deal with the rest!

Well, that was it guys! Another 2.2k word guide! I hope you appreciate the tips and tech I’ve shown you, and I wish you the best results with this one! Au revoir!