Chip-Cycle decks can be hard to play, and aren’t the right pick for everyone.

However, Chip-Cycle decks can be very powerful against almost all decks if you can play them right. Many key components to Chip-Cycle decks are unlocked in the early arenas, so this playstyle should be a viable choice for any player.

Today I’ll be sharing my guide of how to create and play Chip-Cycle Decks. 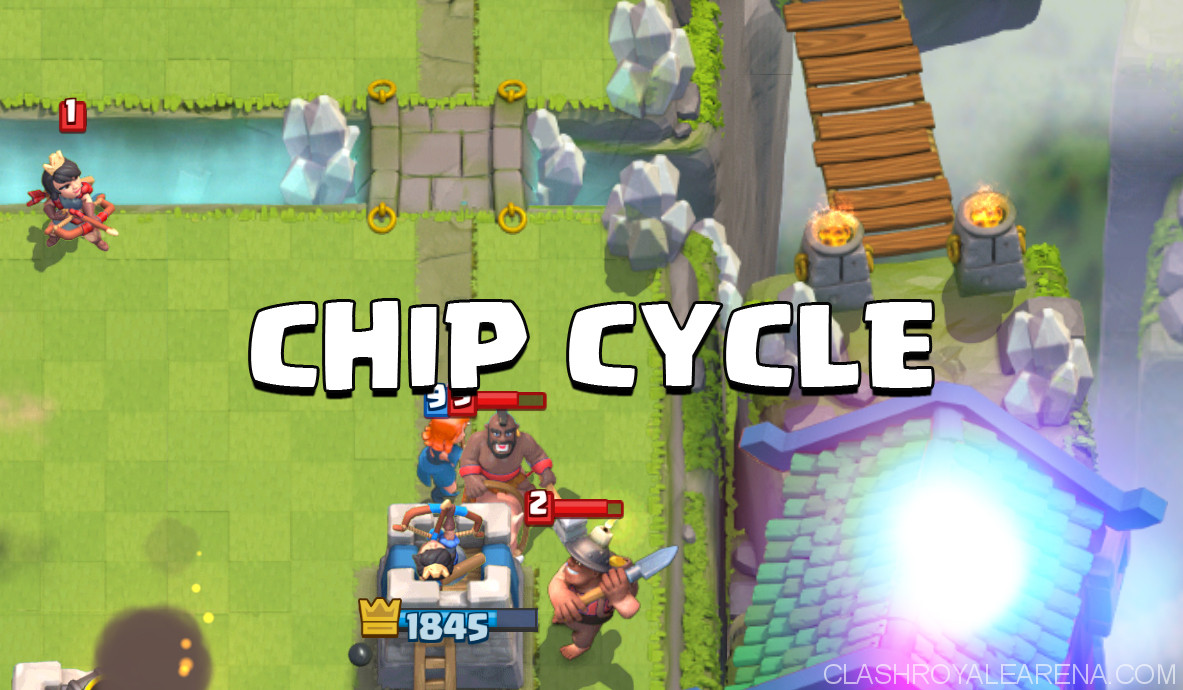 The Ultimate Guide to Chip-Cycle

What is a Chip-Cycle Deck?

A Chip-Cycle Deck is a deck consisting of cheap cards that allow you to gain advantages over your opponent and put constant pressure on them, denying their large pushes.

Additionally, Chip-Cycle Decks will contain rush cards like Goblin Barrel, Miner, Hog Rider, or Princess. Rushing your opponent either forces them to defend and split up their synergy cards, or suffer large amounts of damage.

Many people underestimate the power of cheap troops. Lots of players are unaware that many cheap cards in the game can counter very powerful and expensive cards. Also, cheap troops can deal lots of damage if not dealt with.


How can I make a Chip-Cycle Deck?

Warning: Chip-Cycle Decks do not need Legendaries, but they do help a lot and will give you an advantage over your opponent. Miner and {rincess are two great cards for this playstyle, and you could face some problems if these Legendaries are not unlocked.

Chip-Cycle Decks are fairly easy to make because they have several key components, but each role in the deck can be carried out by many different cards.

Usually a Chip-Cycle Deck will contain two-three cards designed for defensive value. These cards should be able to take out troops on your side of the arena for a positive elixir trade. Goblins, Skeletons, and Minions are all a great choice.

Also, a Chip Cycle Deck will usually contain only one or two stronger defensive cards. These are very important because they are what define the decks defense. If your opponent drops expensive cards for a big push in one lane and you rush the other, these strong defenses will be your lifeline. Inferno Tower, Furnace, Mini P.E.K.K.A, Musketeer, Valkyrie, and Knight are some of the best choices.

Next, a Chip-Cycle Deck should have at least one spell. Spells come in handy on offense to clear away swarms and on defense to help stop gigantic pushes. Fireball, Poison, Arrows, Zap, and Log are the most viable options to use.

And last but certainly not least, offensive rush cards. These cards will deal the most damage to your opponent’s towers and put pressure on them, forcing them to react. Goblin Barrel, Hog Rider,Bandit, Battle Ram, Miner, and Princess are all great choices.

Here are some of my basic templates & examples for a Chip-Cycle Deck:

How to play with a Chip-Cycle Deck

Warning: Chip-Cycle Decks are not everyone’s playstyle. If you choose to play this Deck type you may need some practice in order to be a strong player with the Deck type.

Even though Chip-Cycle may appear to be the hardest play-style possible, it actually can be quite easy once you get the hang of it. I have broken this playstyle down into three parts: How to respond to a lone tank, How to counter a large push, and When to rush your opponent.

How to respond to a lone tank:

The best move to respond to a tank in the back is to rush the other lane with your offensive troop, or play a siege card like the Princess forcing them to respond. This way they can’t afford to put supporting units behind their tank, making it easier to be taken out by your strong defense.

If a good offensive card is not in your hand, I would suggest dropping a cycle card or putting high damage cards a few tiles behind the bridge to put your offensive troop in front.

TL;DR: Rush the other lane and be prepared to counter the tank with a strong defense

How to counter a large push:

Countering a larger push can be somewhat difficult. However, lucky for the simple formula-tank killer, support distracter, support killer, and spells for swarms you should be perfectly fine.

Say you rushed the other lane in response to a Golem with Hog Goblins but your opponent Cannon Zapped killing your push. Now they are able to place a Baby Dragon, Musketeer, and Minion Horde at your Tower. You play a building in the kill zone to kill the tank, a support killer like the Valkyrie for the Musketeer, a ranged or air-targeting troop like a Musketeer for the Baby Dragon, and finally a splash troop like a Wizard or spell for the Minion Horde. Now you have many troops for a powerful counter-push and should put an offensive troop in front for a counter-push.

TL;DR: Use a tank killer, support distracter, support killer, and spells to counter large pushes, and then counter-push with what’s left of your defense and an offensive troop

When to rush your opponent:

There is four main situations where you know you should rush your opponent.

Chip-Cycle Decks are generally a well-rounded Deck against all decks. Below will be a summary of both what you should expect, and how to play against all the other decks archetypes in the game.

Beat-down decks are a very powerful Deck archetype. It is key to know this Deck’s fatal weakness, in that the Deck will have poor defense and requires a lot of Elixir to build the three-crowning push. Therefore, this Deck match-up will be decided by your ability to apply constant pressure on your opponent, dealing damage to their towers well avoiding their massive pushes.

Hog decks are very common right now at the top of the leaderboards because of their power on both offense and defense. What’s key to defeating this Deck is knowing that most Hog decks have powerful, expensive, singular-unit defenses like Valkyrie, Musketeer, Cannon, etc. That being said splitting up your offense after they pushed or any time you have an Elixir advantage is a smart move.

Most of the time you will win because the Royal Giant needs proper support to be effective. Putting pressure on your opponent avoids this. Also, Royal Giant decks are weak to counter-pushes which can result in one push take-outs. The only thing to watch out for is Electro Wizard and Minions if you are using Inferno Tower since it can be distracted or killed.

This purely depends on the cards in your Deck. Splashers will counter Minion and Goblin cards well and spells can crush Goblin Barrel and Skeleton Army. Having many spells and splashers basically insure the win. Always make sure you use the right card for the job, and don’t let your cards fall out of rotation.

Chip-Cycle Decks have lots of cheap cards so the Miner will have a rough time hitting your Tower. Even if they have spells for you cheap troops you will always have more counters. On offense simply focus on letting your opponent push, and then counter push. Miner decks have poor defense due to their highly composed offense.

Chip-Cycle Decks may face some problems against three-Musketeers because they crush cheap troops. However, if you use modified Deck types like in my templates above, you can manage a few stronger cards. Having both a medium and light spell and/or a strong support killer will crush three-Musketeers as long as you have them in rotation. Even though they are a nine Elixir card, it is not a good idea to rush them because you will need lots of Elixir to defend. It’s not like your countering a lone tank, you could be a two-three Elixir watching a Mini-tank and three Musketeers take both towers.

How to get the best value

Value trades are one of the most important plays to make in a match using a Chip-Cycle Deck. A value trade or positive Elixir trade is when you counter an opponent’s card with a card cheaper than theirs. Chip-Cycle cards are one of the best Deck archetype to gain many value trades using cheap units and spells. Below will be listed the troops types in the game and their best value counters.

What You Should Know:

Warning: Chip-Cycle Decks will be less effective if your cards are lower than your opponent, mainly because cheap troops have the greatest interaction change if they are lower level.

Over-leveled opponents are Chip-Cycle Deck’s kryptonite. If your opponent’s towers or cards are even one level higher than your cards, the battle could be completely different. With cheap troops, many interactions change when your opponent is higher leveled than you are. Here is a list of things you should know if you are facing people higher than you with a Chip-Cycle Deck.

(Cheap Troops will deal decreased or no Tower damage)

(Spells will overrun your cheap cards)

Some players may find a great Chip-Cycle Deck that has a legendary or two in it that they do not have unlocked yet.

The world isn’t over, please do not panic.

Most players think that a card with no other cards like it has no substitutes, but they’re all wrong. What matters is that the substitute will have the same purpose as the original legendary.

All legendaries will have substitutes, no matter how similar or different the change will be. Just make sure to keep in mind that legendaries can be substituted, and to play the Deck how you should with the substitute and not the legendary.

Below are a list of legendaries commonly found in Chip-Cycle Decks and their most viable substitutes.

Here are some legendary substitutes to Chip-Cycle Legendaries:

Decks you can try!

Here are some Chip-Cycle Decks that I have used or am using right now and have worked out well:

Chip-Cycle Decks are a very powerful, but hard learned Deck that can crush many metas in this game. Very few players are using this Deck archetype right now and are unaware of its capabilities.

I tried to cover every aspect of this Deck type in this article but if this still wasn’t enough I am truly sorry.

Please feel free to send me your decks or suggestions for more guides via the comment section below.

I may be starting a YouTube channel down the road and could feature all your unique decks.

Please try these decks if you are having trouble on the ladder, as these decks can crush the Royal Giant and Golem Metas all over Legendary Arena.

Thank you for your time and I hope you have a great day!