As I have received lots of requests from Golem fans, I would love to introduce to you this amazing relatively cheap Golem deck to you guys! This deck was shared by crazybullshit (nice nickname man!)! 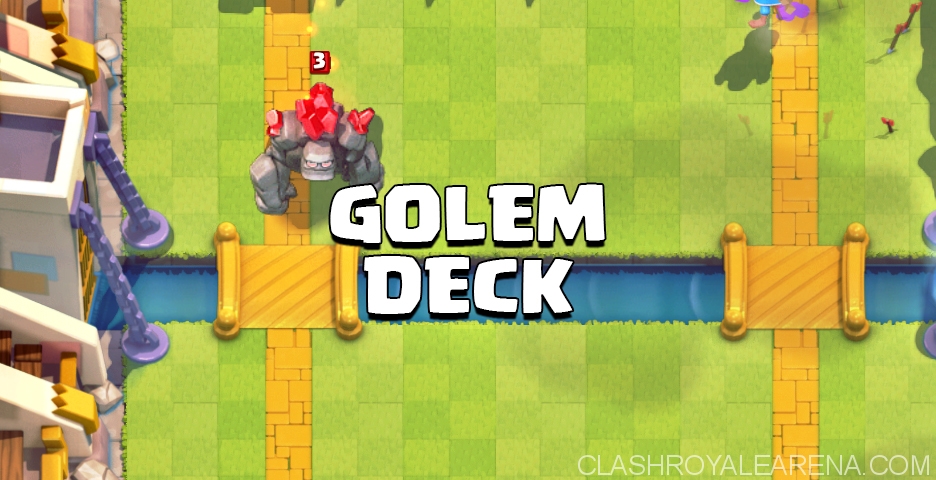 Golem is obviously the core of this deck and is the meat shield for other troops. You will always want to put your Spear Goblins and Goblins behind the Golem in order to take out all distractions. When your opponent plays a tanker such as Royal Giant or Giant, you should use your Golem to deal soak damage from support troops behind that tank (Wizards, Spear Goblins, Archers,… for example). and use your cheap troops to deal with the opponent’s tank. Once the opponent’s tank is down, drop your Rage down on your troops and 1/4 HP Golem to launch a speed counter attack.

Three Musketeers Card is pretty popular in this meta. These cute girls can take down a tower quickly by themselves If left unanswered. Sometimes, I fake a big push on one side, force the opponent to spends couples of Elixir to defend and drop Three Musketeers on the other lane supported by Rage to sneak in a tower. On defense, they are very good against some pushes like Barbarians + Giant, Balloons,… I usually drop them in the middle so they will split into 2 parts and can’t be totally destroyed by a Fireball. You will want to play them behind your Golem and even your Goblins.

Rage is a super important card in this deck. It will easily push a skirmish in you favor and will help you take down a tower before your opponent has enough Elixir to defend. I usually keep Rage in my hands and drop it at the best possible moment, for example, when my Three Musketeers are defending on my side of the map and my Golem is about to cross the bridge. You can use Rages in lots of situations. The surprise factor is very huge with this card because after you take down the first Tower, your opponent will be prepared for it the next time.

Elixir Collector is definitely still one of the best cards in Clash Royale. You will always want to have it in your starting hands. If I have Minion Horde or both Goblin cards in my hands, I usually place it 2 tiles above the King’s Tower so opponent’s Hog can’t hit it. If my opponent plays Elixir Collector first, drop it behind your Crown Tower. If your opponent throws a Fireball on it, get ready to launch a push but don’t go too aggressively If your opponent still has Arrows.

Minion Horde is one of the win conditions in this deck. They are very useful in both offense and defense. They are excellent at dealing with Hog Riders. If you throw them down while the Hog Rider is running, they will spawn in time and remove that Hog and even following Goblins with just 2 hits. A small note here for you is that it is very easy to Fireball, Arrows and Zap Minion Horde so you will want to drop them as soon as possible in order to kill Hog in time. Last but not least, keep tracking your opponent’s AoE spells is very important, not only for Minion Horde but also for your whole army. If your opponent doesn’t have any AoE card in his hands, Golem + Minion Horde + Rage will be a deadly combo.

Spear Goblins: One of the most useful cards in game and can be used in almost every deck! I usually use them to lure troops and deal with Archers (once Archers start hitting your Tower, drop Spear Goblins right on top of them so Archers can only shoot once). Spear Goblins are excellent to deal with many flying units locking on your Golem. On offense, you can play them behind your Golem to remove distractions and deal loads damage to opponent’s Tower. This is also a great card to cycle your deck!

Goblins: These small guys can deal tons of damage to opponent’s tank and are great at distracting troops. I usually use Goblins to deal with Hog Rider, Wizard (read more at here), Giant, Royal Giant, Witch,… I use them offensively most of the time but due to their very fast movement speed, I can easily send them into a fight. They are great to cycle the deck too!

Arrows is a very useful card, especially in Arena 8, where you face a lot of Princesses. But, sometimes, your opponent wants to bait your Arrows out so you will want to use your Goblins strategically to kill Princess at the first time. I usually save Arrows for swarms like Minion Horde, Goblins,… Don’t forget to get your Arrows ready once your Golem has crosses the bridge in order to remove all swarms quickly. 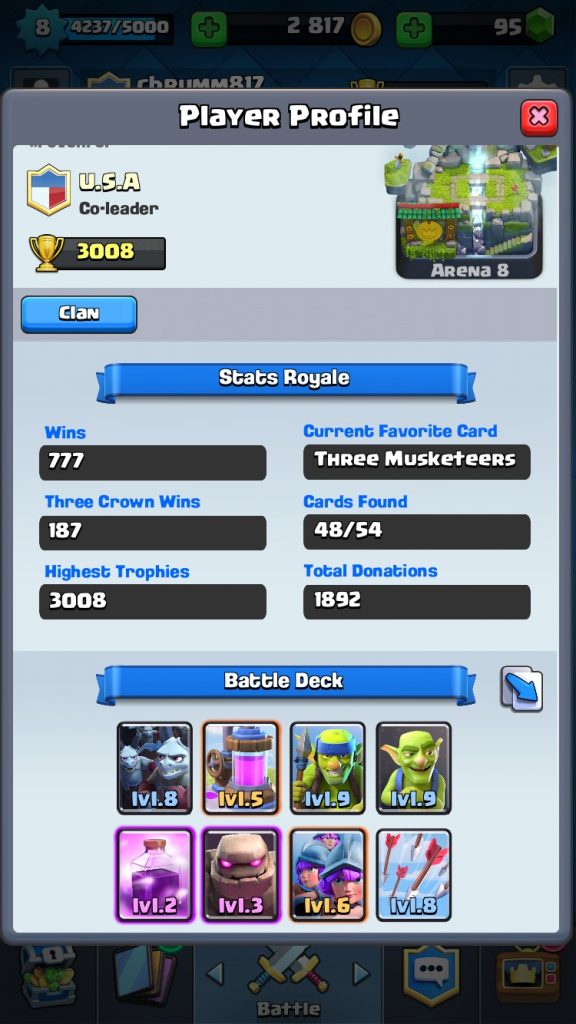 The main strategy while using this deck is to play defensively and launch a sneak counter push with your Rage Spell. Sometimes, my opponents spend everything thinking they are dominating but I can easily counter those pushes with Golems + 3 Musketeers, and after that should be a strong counter push. You have loads of potential damage saved up in this Golem deck, which helps you get lots of 3 crown wins within the first minute.

I am going to write lots of more tips and tricks for using this Golem Deck so please stay tuned my friends!

Hope you enjoyed this deck. Don’t hesitate to comment If you need any help. And please share this deck with your friends If you like my blog. Thank you very much!