Hey there guys Lolman here, yep not dead yet. I’ve made almost all splashyard related guides on CRA and I am back at it again!

I’ve discovered some awesome ways to feature the Cannon card and Ice Wizard with Graveyard!

This deck has gotten me a few back to back 12 wins and a few of my friends, including Will, tested the deck and were successful with it as well!

So without further ado, onto the deck! 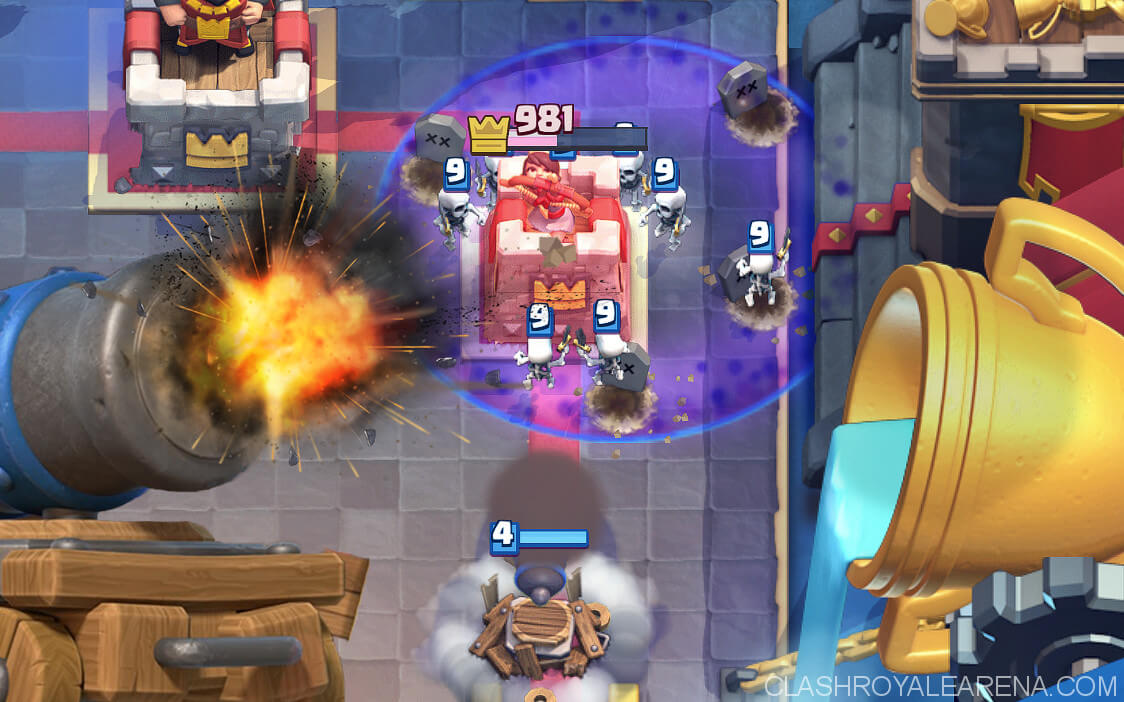 In the recent balance change, Graveyard was buffed and nerfed at the same time. But in my opinion, it is still in a good position right now.

The “nerf” somehow reduces the room for error where Skeletons might activate the King Tower. Also, Skeletons will spawn closer to the Tower. Thus, they can walk less and will be able to hit the Tower sooner, making more damage!

However cards like Poison now are better at countering Graveyard.

Graveyard placement is the key. Depending on what your opponent has, you will typically change the placement. But more times than not, you want the Graveyard to spawn Skeletons on both sides of the Tower.

Make sure common counters like Ice Golem, Valk etc can’t get them all at once.

This is probably one of the most popular tanks paired up with the Graveyard.

The reason is that he is one of the best defensive cards and he has a decent amount of HP as well!

He isn’t a fast troop so you can build Elixir for the counterpush!

And because of his low cost, you don’t need to save as much as say a Giant in order to use Poison.

He is brilliant at handling troops behind a tank as well, like Musket, Wizard, Ice Wiz, E-wiz etc.

Spell that synergizes best with Graveyard!

Its duration is only slightly lower than the Graveyard, thus providing a lasting protection.

Try not to overcommit though! If you cannot kill the troops in the Poison and doesn’t yield a neutral or positive trade, ideally preventing a counter push while you have defensive cards like Tornado if they rush with Hog, you shouldn’t Poison in that case. Try to get value and be very hesitant to Poison something with your Graveyard in 1x Elixir which might end being a bad move like Poison on Bats over a Graveyard or Goblins. However in 2x Elixir feel free to take these negative trades.

Tornado – Tornado is back baby, nado Hog to king, Barrel to king, Miner to king or even let Bandit connect and nado her to the king Tower!

This spell will be your go-to at times.

You want to combo it with Ice Wizard usually, with his slow this can be quite nice just time it properly though!

You can also pull a neat little pull a valk out of the Graveyard as well!

Bats –  Cycle card, good if your opponent runs Log nor Zap, you can use this to draw out spells too!

If the opponents use Zap or Arrows to remove them, you can not worry about them doing so to your Skeletons from the Graveyard! Only 2 Elixir good for positive Elixir trades, make OJ proud.

Ice Wizard- 3 Elixir, the MVP of this deck. Utilize his slow and splash!

While you lack DPS, this guy will give you more time to kill the enemies.

Always have some other troops like Knight, Cannon Card tanking for him.

His splash isn’t that big, nor is it that damaging so take care to use him in a way that mitigates damage.

Here I was initially content with using just the Knight vs the Mega Knight (not letting him jump on the Knight, I placed him right at the Mega Knight.) When the Minions were placed, that meant trouble for the Tower, so I drop the Ice Wiz and Tornado it. Ice Wizard survived and cleared out that last wave of Fire Spirits too! Value city.

I use Mega Minion instead of E-wiz simply because carrying 2 Wizards isn’t really something I would like, and Mega makes this deck a bit more free to play friendly.

Of course you can sub in an E-wiz here if you want to.

Mega is mainly for defense and maybe a troop behind the knight when you use Graveyard.

While you can Mega Minion + Graveyard, I tend to prefer not using Mega Minion in an offensive manner unless it’s the only tank I have and I want to rush a Pump.

Similar to the Knight, you can use him to take down troops behind a tank, like a Musket, Wizard, Ice Wiz, E-wiz, etc.

Also pretty good at taking down a Hog but should not ideally be used alone because Hog will get 3 swings on the Tower (over 600 damage!)

With the range, each hit will deal 203 damage onto the Tower additionally to the Skeleton chip which will pile up. Unlike say a Knight in the pocket who can be distracted easier than a Cannon Cart. Also, the Cannon Cart in total has more HP than a Knight at Tourney cap!

Vs Mega Knight you want to pull him towards the center, the jump will knock the Cannon Cart back a bit, leaving the Mega Knight in the range of both the towers. You can also just avoid the jump and place it right in front of the Mega Knight, which works just as well albeit there won’t be a counterpush for you!

Early on, like with literally all decks, you will not want to go aggressively with say a Cannon Cart + Graveyard push, unless they Pump up of course. 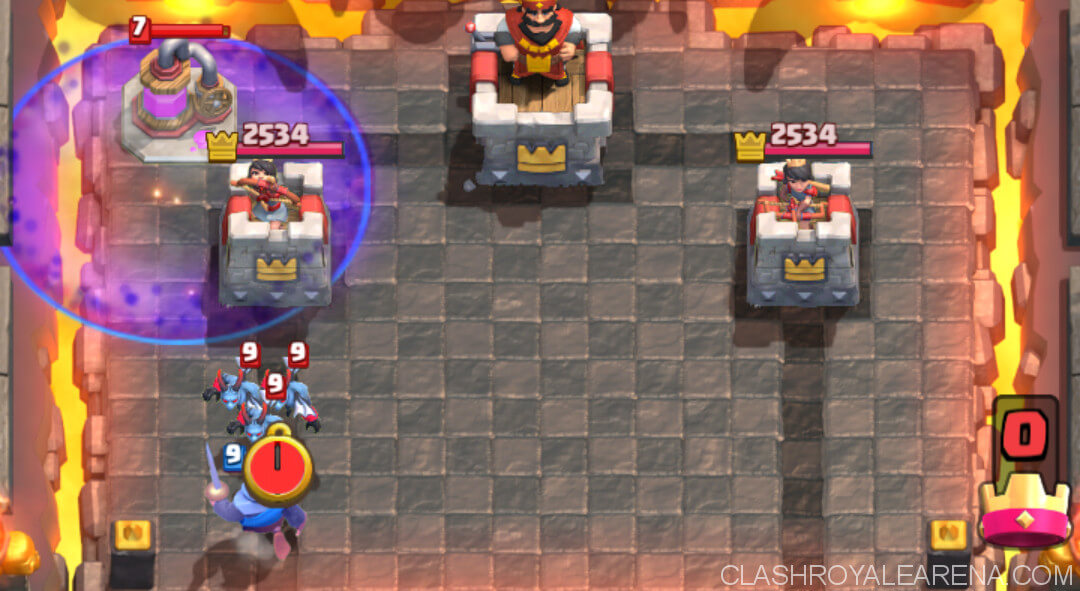 They pump up? Punish!

Ice Wizard should ideally not be cycled but more times than not you will not really be punished for an Ice Wiz at the back because you still have Poison and Tornado if they say use a Hog+ Horde push on the other lane!

So gauge your opponents deck while defending.

Unlike beatdown, this deck is a 1-0 deck so you want to avoid as much damage as you can while not making any game changing negative trades.

For example, I would use maybe a Mega Minion to stop Fire Spirits but I would avoid doing something like Ice Wiz + Tornado for Minions

By now you will have figured out what you are playing against. Try to always keep your Knight and Graveyard in cycle together.

You will want to get some chip damage in this little time range.

Ideally, you want to counterpush like with any splashyard deck.

Unlike other splashyard decks, you don’t really have any slow moving troops like the Bowler though. But all the same, make positive trades.

When you outcycle their counters or are ahead of Elixir, you can simply use a Knight Graveyard push to do a lot of damage!

That being said, this is when you would be changing lanes as well!

Say you punished a Pump, got about 1000 damage on the Tower and they start a Golem in the back?
Because Lightning will kill your Ice Wiz, you want to not deal with that push if possible so you should rush the other lane.
Using a simple Tornado, you can counter that Golem if the situation calls for it, so get your opponent to split his/her Elixir.
If you get the Tower of a lot of damage, you are in a good position to take that 2-1 win if they do manage to take your own Tower.

So in a nutshell, defend and take every opportunity you get to capitalize on opponents mistakes and misplays to get damage!

I would cycle Knight + Graveyard and Poison against whatever they defend with repeatedly, while using Cannon Cart, Mega, Ice Wizard, Tornado on defense.

It should ideally be a GG where you defend then counter push and whittle their Tower away.

In 2x Elixir, with this medium average Elixir cost, you will be able to cycle this relatively quickly using Bats, Ice wiz, Knight etc to cycle back to Graveyard + Poison with your troops tanking and then get what damage you can.

Continuously chipping away at the Tower till you finally get that win.

Vs this deck, you want to punish the opponents pumps without missing a single one!

Using the Graveyard, over simply poisoning it, if possible I would save Poison for defense because Ice Wizard + Poison are enough to kill Night Witch, Mega Minion etc.

Don’t give your opponent Lightning or Rocket value either! Something I like doing is using Cannon Cart will tank some hits from the the Night Witch, Mega Minion etc. When shield comes off, Golem will go to attack the Cannon Cart without the shield while you will ideally use Tornado + Ice Wiz to snipe the back end troops as well, resulting in a rather nice trade for you.

Tornado is your best friend!

Tornado the Hog to the King and you are good to go.

If it’s the P.E.K.K.A Hog, avoid Poison or Lightning value. Same for Mega Knight, use Cannon Cart vs Mega Knight.

Also Knight is a good defense vs the Mega Knight too! Use Ice Wiz+ Tornado if you can get value vs a Hog push but you will want to save the Tornado for the Hog at all times.

Graveyard-  Ice Wizard, Bats, Mega Minion and Knight are all good answers for the Graveyard.

Depending on what tank they use, you will need something to kill the tank.

If they use say a Knight, you can use maybe a Mega Minion on the Knight and Knight in the Graveyard or Ice Wizard.

If they use say Archers, you can use Knight on Archers and Mega or Ice Wizard in the Graveyard.

Miner – Like Hog, you should pull the Miner to king but only need to do that once.

Overall, not a difficult match-up.

Just try to keep your Knight saved for the Bandit, otherwise you will be making a bad trade vs her other than that there really isn’t too much you need to worry about when facing a Miner deck.

Tornado Barrel to King first then you can keep doing that to get 0 damage, king Tower should help out quite a lot!

Their Inferno Tower can be pesky though. Poison out Princesses early on.

So that covers this deck guide guys, this deck was really fun to play and I wish you all the best when testing this deck out!