Hey guys! Its Blaze back with another guide for you all! Today, I will be talking about Bridge Spam decks. 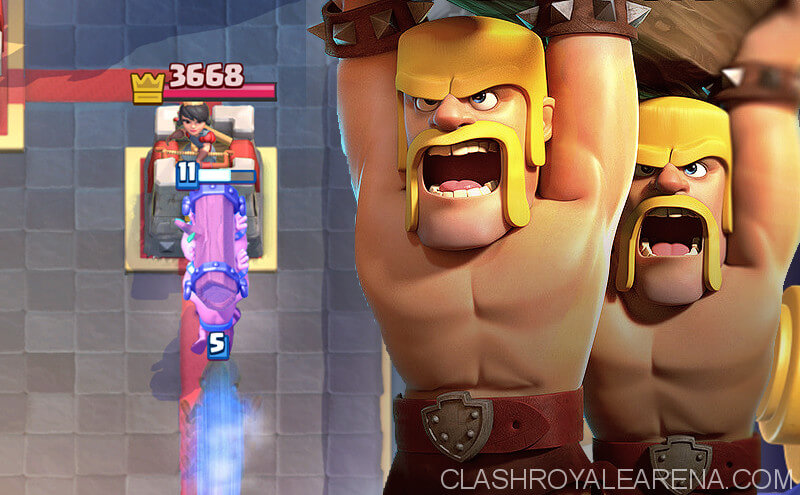 As you all know, the current meta is being dominated by a particular deck type known as Bridge Spam decks. Some consider Bridge Spam a different and new archetype while some consider it as a sub-archetype within the Control archetype.

Now, keeping this debate aside, I will be talking about :

What is Bridge Spam?

Bridge Spam is basically what it sounds like: Spamming troops at the bridge.

Now, this play style is used by players in lower arenas who basically place down all troops at the bridge in hope of dealing damage.

But extra-ordinarily people have found that certain cards like Battle Ram and Bandit actually become quite strong threatening when used in this manner and this resulted in altogether a different type of decks.

The Bridge Spam deck type was first used in the Clash Royale-Crown Championship-Global Series (CCGS) by Team Vietnam. That deck is now know as Vietnam’s Bridge Spam deck which I will be showing below.

Now, this what most people think about the origin of Bridge Spam.

Bridge Spam was first used a long time back, more than a year ago in the form of P.E.K.K.A. Dual Prince. Yes, thats right. You may be shocked, surprised and would be calling me crazy (ouch) but its true.

The reason I call it Bridge Spam is because of Prince and Dark Prince. These two cards have similar charge ability like Battle Ram then why shouldn’t they be considered Bridge Spam. (More explanation below).

So, what I want to say is Bridge Spam has been existing since a long time but only the current meta has favored this deck type.

Why is Bridge Spam so strong?

The Bridge Spam deck type is strong because the cards used in it like Battle Ram and Bandit become quite threatening and quite dangerous because you need to quickly counter these cards or they will charge/dash straight towards your tower very quickly dealing huge amounts of damage.

People ‘cultivated’ this simple and yet dangerous tactic by using it in a Cycle type deck for an insane amount of pressuring and using them with Cards which need a slow response like Night Witch, P.E.K.K.A. and Three Musketeers for a contrasting push which surprisingly is too strong to counter head-to-head.

The ability of these decks to follow a slow play style in the start to gain elixir advantage and then to play super aggressively in Double Elixir and Overtime has made them the most powerful deck in the Meta.

Other than this, the Bridge spam cards can be used quickly to deal lot of damage after the opponent places a high cost card because then the opponent doesn’t have enough elixir to defend. This restricts the opponents offense to such an extent which no deck has done earlier.

Placing down Golem, P.E.K.K.A., Lava Hound and even the Elixir Collector (which was considered as one of the best starting plays) has become a risky move.

Best Cards to use in Bridge Spam decks

The best cards to use in Bridge Spam decks are the ones which have the charge/dash mechanic. This ability makes them strong in such decks.

Battle Ram: This card certainly has moved a lot. From being an under-rated, off-meta card it has transformed to a Super Strong Meta card.

At Tournament Standards it deals a good 492 damage while charging and the Barbarians that spawn can wreck the tower. A battle ram can actually take down an entire tower (or atleast 95% of its HP) alone for only 4 elixir.

This just explains why it is so strong and why it can’t be ignored.

The ram itself has a decent amount of HP while the Barbarian’s HP makes it equal to a Mini-Tank.

It is also a great Lightning Rod as it can absorb all 3 hits when used along with 3M.

Bandit: The Bandit buff that came along with the last update has finally transformed the Bandit to what she was meant to be when she was released.

For just 3 elixir, you get a fast troop which can deal a good amount of damage very quickly.

I haven’t mentioned her Dash ability yet! This ability makes her invulnerable and Super quick. Even a split-second delay in dropping a card results in tons of damage.

Along with the Battle Ram, she forms the core of the Bridge Spam deck type.

He has high amount of health, he is a hard hitter and even one hit is quite a lot.

His main weakness is that he can be distracted easily but with right amount of support (like Dark Prince) he is a beast.

Dark Prince: Dark Prince is a good card but what he really needs in just an Area buff. Once it happens he will be strong.

I actually tried this card in a modification of Vietnam’s Bridge Spam and that surprisingly got me 9 wins in a Classic Challenge in the first try. This is just an example of how good he can be after a buff.

The Princes are good cards but what both of them needs is faster charge speed after all they ride horses. Their charge speed should be increased by 20% to make them good but not OP cards.

Night Witch: The most OP card right. She is present in nearly every Bridge Spam deck even though she isn’t really a Bridge Spam card.

Not much to say, she just so strong and versatile that she somehow finds a spot in any deck. Along with Battle Ram and Bandit, she forms a strong combo while I like the call the ‘Phantom Combo’.

P.E.K.K.A.: She is a beast. Having high health, pretty high damage, she is the best threat card.

Her main aim in Bridge Spam deck is not to reach the tower but pressure the opponent and force him/her to make mistakes.

Three Musketeers: These three gals have never been so strong like this.

Battle Ram has just made them invincible (nearly). Battle ram’s ability to act as a lightning rod for these 3 gals have increased their popularity tremendously. Their ability to split push along with the addition of Bandit and Night Witch has become a super strong tactic.

This is the Cycle version of Bridge Spam. With 3.0 average elixir cost you can constantly pressure the opponent with Bandit and Battle Ram and even form big pushes because the deck is build as a 3-crown deck.

Read more about it at here.

This deck focuses on playing slowly and pumping in the first 2 minutes with limited offensive play and then playing super aggressively with 3M Phantom Combo in Double Elixir.

You can cycle your cards pretty fast and split push for high amount of pressuring.

Read more about this deck at here.

This deck has a bit similar play style like the 3M deck: Slow play and pumping in first 2 minutes and aggressive play in Double Elixir. The difference is that P.E.K.K.A. acts as the MVP of the deck as Tank-killer, tank and threat card.

You mainly have to counter push in this deck after using P.E.K.K.A. and Baby Dragon on defense and then placing down the Phantom Combo behind it.

I have also has success with this deck by playing it as a Beat down deck in some cases i.e. placing P.E.K.K.A. in the back and forming a big push with it aiming for a 3 crown.

My view on Bridge Spam

Now, I know my view doesn’t matter to you nor it fits in Ultimate guide to Bridge Spam. But I really want to share my thoughts. Firstly, Bridge Spam sucks.

This meta really needs to change. Bridge Spam is a strong tactic but it just reduces the amount of skill used.

What skill is in just placing down troops back to back at the bridge whenever you get the chance?

People need to play in such a manner where they can fully use their skills.

You need skill for that: defending as much as you can and still forming a big push. But in Bridge Spam, you just place down troops constantly and don’r worry about defense because the opponent would never attack.

This cannot be called ‘unfair’ exactly but you get the point: the next balanced changes should aim to put an end to the Bridge Spam Meta.

That’s all folks! Hope you guys liked the guide!  Ask me about anything in the comments section below or on Discord.