Hello guys, today I am going to share with you the best tips for hitting Legendary Arena (Arena 11) in Clash Royale as many of you guys have requested this lately. 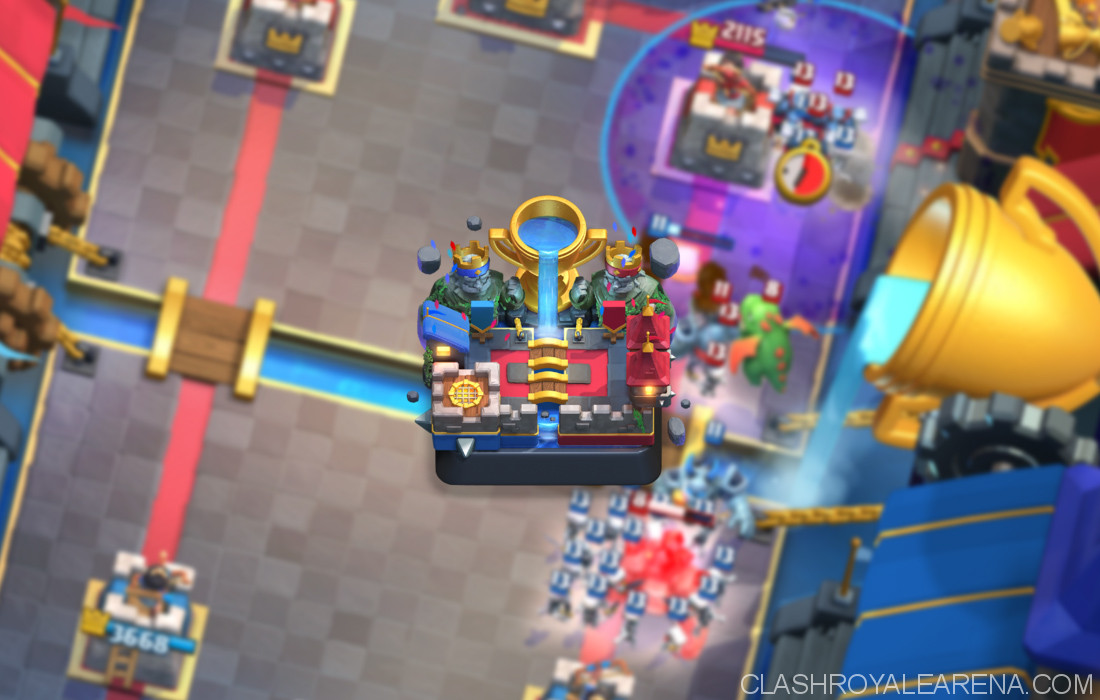 How to hit Legendary Arena!

So at this trophy level the vast majority of your opponents are going to be utilizing primarily one of the two following win conditions (and sometimes both together): Hog Rider or Royal Giant. Occasionally you’ll meet some fringey strategies like Lava Hound Clone, Three Musketeers, or the classic Bait deck.

However based on the meta, perhaps the most important thing to learn are the methods of countering the Hog Rider and Royal Giant. It is very important that troops and buildings are placed properly to counter this guy, and slight misplacements can prove extremely costly.

Also you need to recognize certain patterns in play and decks so you know what to expect. If your opponent plays something like Goblins or Skeletons far in the back, have your Hog counter ready at a moment’s notice in case he’s setting up for that. There are a lot of fast-twitch reactions in this game and the first step to mastering those is being able to read an opponent’s play, it sounds like a simple skill but a lot of players have trouble with this.

In the crucial 3600-3800 range where a lot of players get stuck, most opponents will be at level 1. Commons are usually 11 or even 12, Rares 8-9, Epics 4-5, and Legendaries 2-3. This makes it extremely difficult for new level 10 players and lower to compete up here, but it is totally possible to make it to Legendary Arena even as a level 9 so don’t give up hope.

In this section I’m going to go over what I believe are the 3 most potent strategies at this trophy level, and then I’ll list out the specific deck I used from the archetype to get over 3800 trophies.

Now, I would never recommend jumping right into ladder with a deck you’re unfamiliar with especially if you’re close to 3000 right now. Take it into games with your clanmates, preferably ones at a similar level and trophy level as you but just games in general can help you to get a hang of the flow of things.


Many of you have likely seen a whole bunch of a sorta similar Hog Cycle strategy that utilizes Zap and Fireball over Freeze and Arrows, but frankly I think Rocket is just too potent of a defensive/offensive weapon in this meta being an excellent answer to a Royal Giant, Giant Bowler or any heavy beatdown push that’s rumbling into your base.

Rocket can be a very punishing card to misplay, so I recommend training a lot in games with clanmates before betting precious trophies on it.

Please visit this page to read more about this deck!


I think a lot of us are aware of how powerful Royal Giant is right now. There are a whole bunch of combinations you can play around him that are extremely good. My personal favorite is the Royal Giant Hog Rider Deck which was posted a few weeks ago on Clash Royale Arena.

Infinite Light, the author of this deck, even used it to push to 5,100 trophies. This powerful F2P deck is fairly easy to use, especially against the most popular decks at the moment. Most of the time, the damage will come from the Royal Giant. Hog Rider is usually used to bait our the defensive cards. Once they are gone, use the Royal Giant!

To read more about this deck, please take a look at here.


Since the latest buff, P.E.K.K.A has been used a lot in Clash Royale due to the 1s loading time.

This deck is dominating at the moment on the ladder. It works very well against Hog Rider, Royal Giant, Graveyard (Poison is now Graveyard’s hard-counter) etc.

Simply do chip damage with Miner, Poison and Dart Goblin. Use P.E.K.K.A mainly on defense and then support her with anything you want on the counterpush.

To read more about this deck, please take a look at here!

Great Tips from Nitrome95 for you!

It’s pretty easy. Just go to the TV Royale of your arena and see what cards are used often. Chances are, if it’s used often, then it must be good!

Also, you always can find the best decks to deal with the Meta decks on Clash Royale Arena.

Ideally, you want to have your average elixir cost for your deck at 2.8-4. Any deck above 4 elixir should use a pump.

This has been something that really helps me concentrate on the match by blocking all outside sounds with something I enjoy. Ideally, you will want headphones to listen to the music. If you really don’t like music, turn the game volume on your phone. The point is is that you want to immerse yourself into the game for full concentration.

#4 Stick to One Type of Deck

Somewhere down the road, you will want to find the deck archetype that fits you (Check here to learn what a deck archetype is). Why? You will get good at one type of deck, instead of average at several decks. You will also know what cards you should focus on the upgrade based on your archetype, allowing you to save up more gold and have higher card levels.

And no, I don’t mean your friend that always beats you at Clash Royale. I’m talking about people that crush it at tournaments. You can check out Clash with Ash’s YouTube channel where he invites some of the most Elite Clash Royale players to do interviews with over gameplay. You can mimic some of the skills they use.

I would always suggest using this technique when using the Hog Rider; it allows you to bypass buildings. Check here to learn how to.

You will get the most value for your Gold for buying the first 3 commons and rares at the shop. Only buy an Epic or a Legendary if it is used commonly in your deck archetype (Bowler and Graveyard are commonly used in Giant beatdown.)

Prince may seem really OP in Arenas 1-3, but don’t buy it from the shop. It is rarely used in later Arenas.

If you have access to a tablet, it is better than playing on a phone. It is much less likely to misplace something, and your hand won’t block the screen.

Take a look at here to see the best tablets for playing Clash Royale!

#10 When to Play Clash Royale

#11 Use the Cheapest Counter

For example, if you have a Witch and Fire Spirits in your hand and your opponent sends in Barbarians, use the Fire Spirits because they are cheaper. Check out the best guides on Clash Royale Arena for more details!

#13 Test Your Decks in Classic Challenge.

Please don’t kill your trophies, they haven’t done anything to harm you.

If you lose several matches in a row, stop for an hour. Playing more will just make you more frustrated.

Great Tips from /u/darchangels13 for you!

Find yourself a great deck which you find it easy to use. Do not change the “deck type” no matter what. Although this might seem bring, this is one of the best ways to pushing trophies fast and better.

Practicing with the same deck archetype will give you a lot of experience, helping you realize its potentialities and its disadvantages. Event If your deck is weak to a specific deck type, you will still able to find a way to beat it most of the time, minimizing your losing rate.

To read more about deck archetype, I strongly recommend you taking a look at here!

Gold is limited. Don’t overspend your Gold on cards you rarely use. Spend Gold only on the cards you use otherwise you won’t have enough to upgrade them later in the game.

#3 – Upgrade the cards when interaction with overlevelled troops matters most.

Don’t hesitate to upgrade your Zap If it can onehit Goblins/Minions afterwards.

Can’t use Fireball to finish off the Electro Wizard? Upgrade it!

The opponent’s tower can onehit your Furnace Spirit coming from the Furnace? Upgrade it to a decent level!

You will find it very crucial to do this when you are close to Legendary Arena, when 1-level-higher costs you the game!


Donating is the best way to get Gold in Clash Royale at the moment. By doing this, you also may give the others cards you don’t want to use. Donating unites the Clan!

To donate, to request, to get Clan Chest/Clan Battle Chest and to practice with a lot of players!

#6 – Take break between games; Do not tryhard when you don’t have chests:

Sounds illogical but you should do this! You shouldn’t rush for an hour because you will get tired/stress very fast. Tryhard only when you have chests. This makes your mental fresh and comfortable.

#7 – You lose because of your mistakes


Do not blame luck If you lose! Watch your replays and learn from your mistakes. See what you did wrong, what you did right, what you could have done to win and which moves were critical to your loss.

#8 – Do not let the balance changes affect you a lot


The recent balance changes are a lot fairer than before. Even 5 cards in my deck got nerfed, I am still doing very well with them. Do a small research before rebuilding your deck!

Do not practice on the ladder regardless of your skills, unless you want to drop back to Jungle Arena. Tournaments, Challenges and Friendly Battles are the best places to practice in Clash Royale.

If you want to face harder opponents, go with Grand Challenges!

If you practice one of the two decks above enough they are more than capable of hitting Legendary Arena. However there are plenty of other decks that can do it too, so at the end of the day what matters most is knowing your deck inside and out and having acceptable card levels (good luck hitting 3k with a deck using level 1 P.E.K.K.A/Prince for example).

I hope this post helps some people when considering the meta and some of the better decks to use. Just don’t tilt and tell yourself this game isn’t going anywhere and a loss of trophies today isn’t impossible to make up.