When I was running this P.E.K.K.A, Lightning Meta counter deck and wanted to switch things up.

I’m not too good at using 3 Musketeers. The last time I properly played 3 Musketeers was when Elite 3M was actually a really viable deck. I dropped 3 Musketeers for a while. Now 3 Musketeers themselves aren’t really that great with Poison being so popular. Turring into CCGS, I saw a lot of hybrid-ish decks. 3 Musket+Heal+ Bridge Spam. So my thoughts were, rather than bridge spam? Why not just go back to the regular 3 musket cycle? It’s better on defense, plus far better on offence as well.

Now enough blabbing, let’s get onto the Deck. 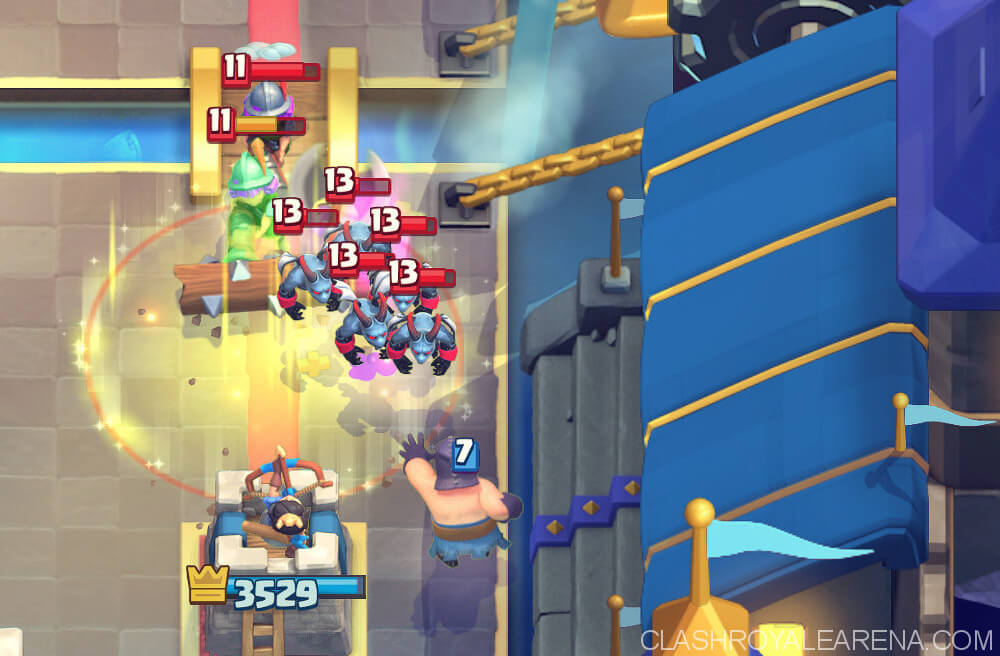 In the current meta, I am hesitant to play the Pump as a starting play. Although early game it is necessary to Pump up, there are a few things I usually look for before I Pump up.

Now if these 3 criteria are met, I am still hesitant but I will Pump up. After waiting a second or two to see if my opponent will make the first play or not.

You will want to use these bad boy to connect to the Tower as much as possible.

You don’t have direct damage spell so getting damage by using troops is the only way to win. Zap cycling is almost impossible.

I usually don’t like to go aggressively with Battle Ram. Like most control decks I want to defend then counterpush using positive trades and surviving troops.

You shouldn’t rely too much on these 3 to get damage on the Tower because your main win condition is the Battle Ram. However, using the Ram as a Lightning rod is totally fine. Actually, I recommend doing that if possible because protecting your Musketeers, getting a +2 Elixir trade will put you into a very strong counter push.

If the game starts and your opponent doesn’t play anything, I would split 3 Musketeers in the back, rather than pumping up if your hand isn’t that great.

If they Fireball, don’t Heal them early in the game. Try and keep the Heal as your pocket card. Like the Freeze. Once your opponent saw it, the surprise effect is gone and your opponent can adjust his plays accordingly.

Also one key thing is vs Poison, feel free to use 3 Musketeers on the same lane if your opponent doesn’t have the P.E.K.K.A.

Knight- Now you can use Miner instead of Knight but I prefer the Knight because he’s much better on defense.

You can use him as a Lightning rod as well in order to soak up the damage and keep 2 of your Musketeers alive. (If you put 3M on the same lane). He can also acts as a tank for your Battle Ram.

Ice Spirit- Can be changed to Goblins or Skeletons if you have a lot of trouble vs Bandit/ Ram decks.

Also you can put a Tombstone in here for more Poison bait if you are fine with a slower cycle.

Minion Horde– This card is really strong. Especially vs Golem decks. You just need something to tank for the Baby Dragon and Horde back end troops and you got a Horde. Kill the Golem off with them, then Battle Ram on the counter.

The DPS is pretty insane. However, use them with caution because they can be killed by Arrows and Poison easily.

Also Baby Dragon etc. So you will typically need to tank for that. Which is what you will use Knight for if your opponent has a Baby Dragon for an example. You can also surround the Baby Dragon as well, because it’s splash isn’t that great.

Zap- Now Log is okay but Log takes time to roll down and clear troops. Zap is more ideal for this, especially paired up with Ice Spirit.

Also Zap can help Ram connect on Tower vs Night Witch for an example. Its stun is somewhat important here.

Heal- This is your pocket card. In the current Poison meta this card is rather strong. You don’t really want to reveal this card too early in the game.

Usually, you want to use it on defensive Musketeers that get Poisoned or Fireballed early on.

If your opponent is smart, he/she will Log or Zap your Musketeers first. Then at bridge Fireball them. Healed or not, they would use 6 Elixir on 9 Elixir (2 Musketeers – 6 and Heal -3) so you want to make sure that you Heal if they Poison or Fireball your troops. Rather than giving them huge value.

Now 3 Musket + Battle Ram is extremely strong in the current meta but you will play this deck slightly different to how people usually do.

You will have to think carefully if you should Pump up as a starting move and if you want to simply start aggressive with a 3 Musketeers in back or Ram + Ice Spirit on bridge.

Now my thought process for each starting play will be listed below.

Pump as the first play? Either Knight, Minion Horde or Zap must be the next card.

3 Musketeers at the back? Heal/Knight/Ram must be next card. 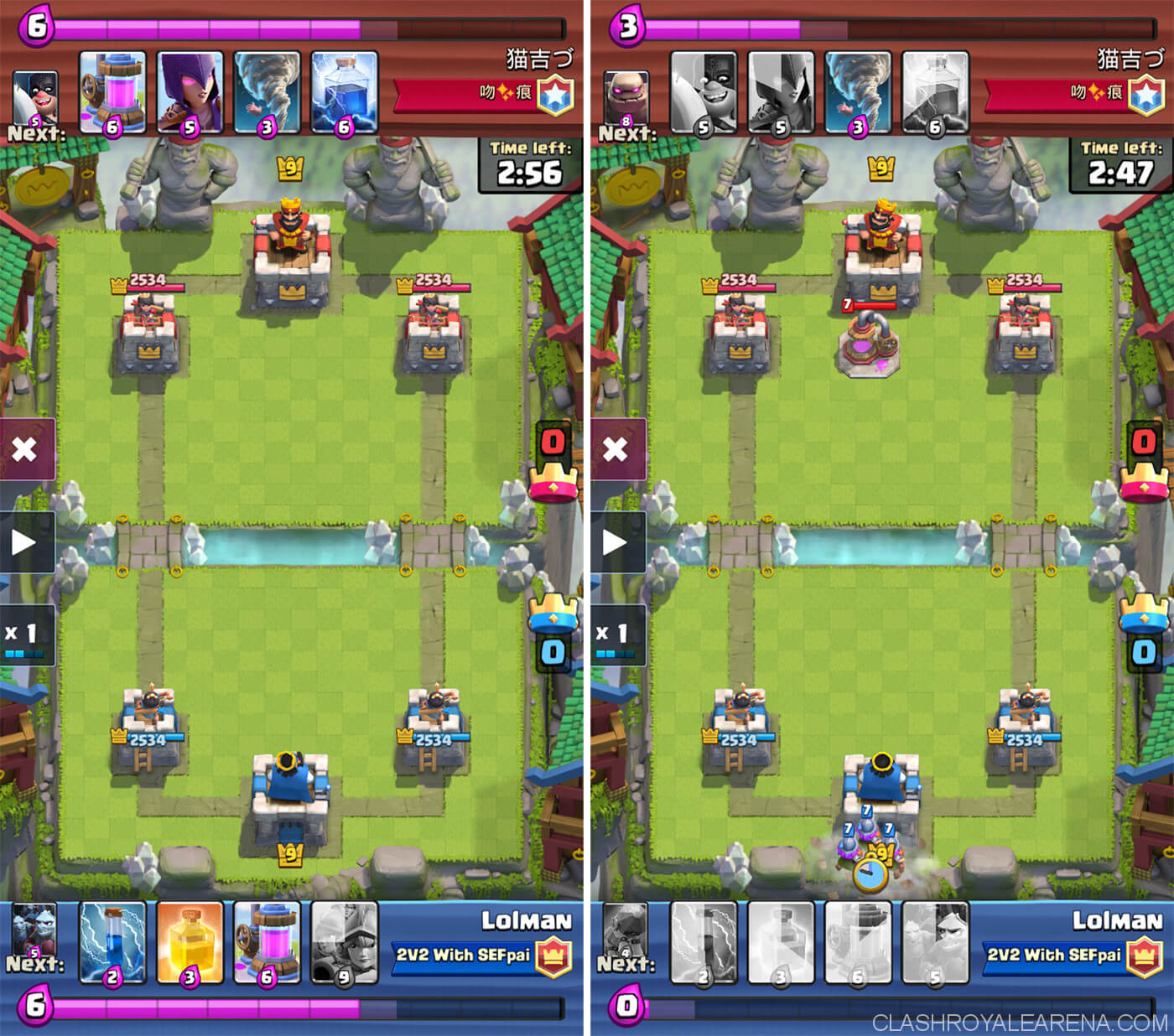 Here with this hand I was hesitant to Pump up, we both made our move when we hit 10 Elixir. I should have waited and pumped up as well, however splitting 3 Musketeers wasn’t a bad move when opponent pumped because usually they were down on Elixir. I could pressure really hard and I also had Heal in hand just in case my opponent had a Fireball. 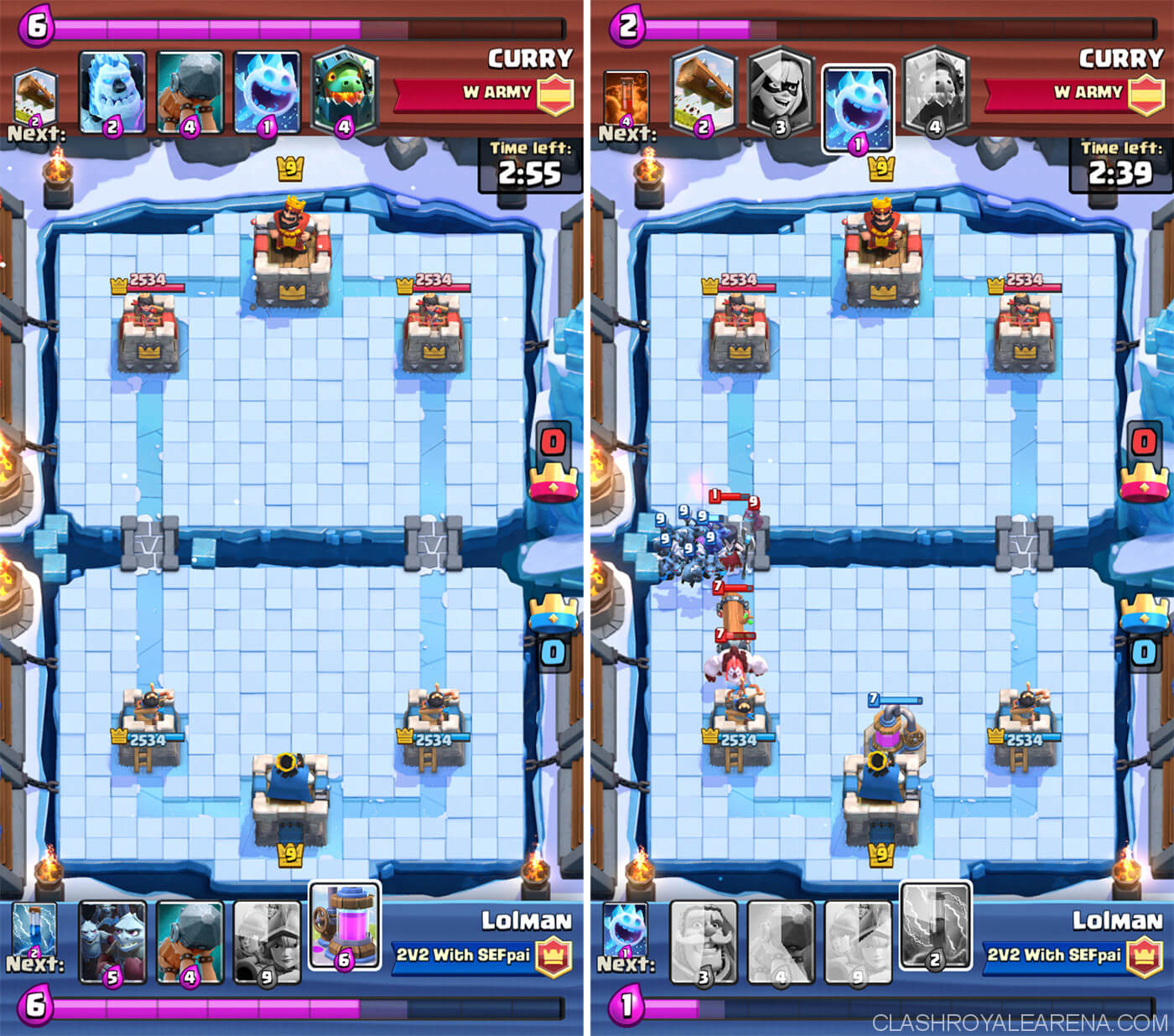 This is a hand I am comfortable starting off with a Pump. I had the Minion Horde, and Battle Ram if I need a tank. Also Zap was my 5th card which allowed me to be able to defend more. Depending on your starting hand you can decide whether it’s safe to Pump up or not. Here I was able to defend this push and counter. I did take about 1000 damage but I was able to take my opponents Tower on the counter push.

So with this deck, early on you most likely will take damage, however safely getting a Collector down is worth taking the damage. Do NOT give up your Tower though. No matter what, but… that being said. Sometimes it’s better to not over defend as well, but with the Collector down. Slightly negative trades are fine.

Play smart. This Deck really shines in 2x Elixir but you really only have 3 defensive cards: Minion Horde, 3 Musketeers, Knight. Battle Ram can kinda work but it’s not really stable.

You also want to avoid going too offensive.

3 Musketeers split in back doesn’t mean you will go all out. It would be a cycling move, in a way. Just this move offers a LOT of defense if rushed. Unlike a tank in the back.

Around now, you will most likely be using troops on defense.  You most likely won’t be able to establish a solid 3M push around here, especially vs decks like bridge spam.

You want to use either Battle Ram behind Knight and keep your finger on Zap, or maybe use Ram in front of your Horde, finger on Zap and or Heal

You can also use a Heal on maybe 3-4 alive Minions if you know your opponent is broke to do close to, if not more than 1000 damage. So here is when you will focus mainly on counter pushing. 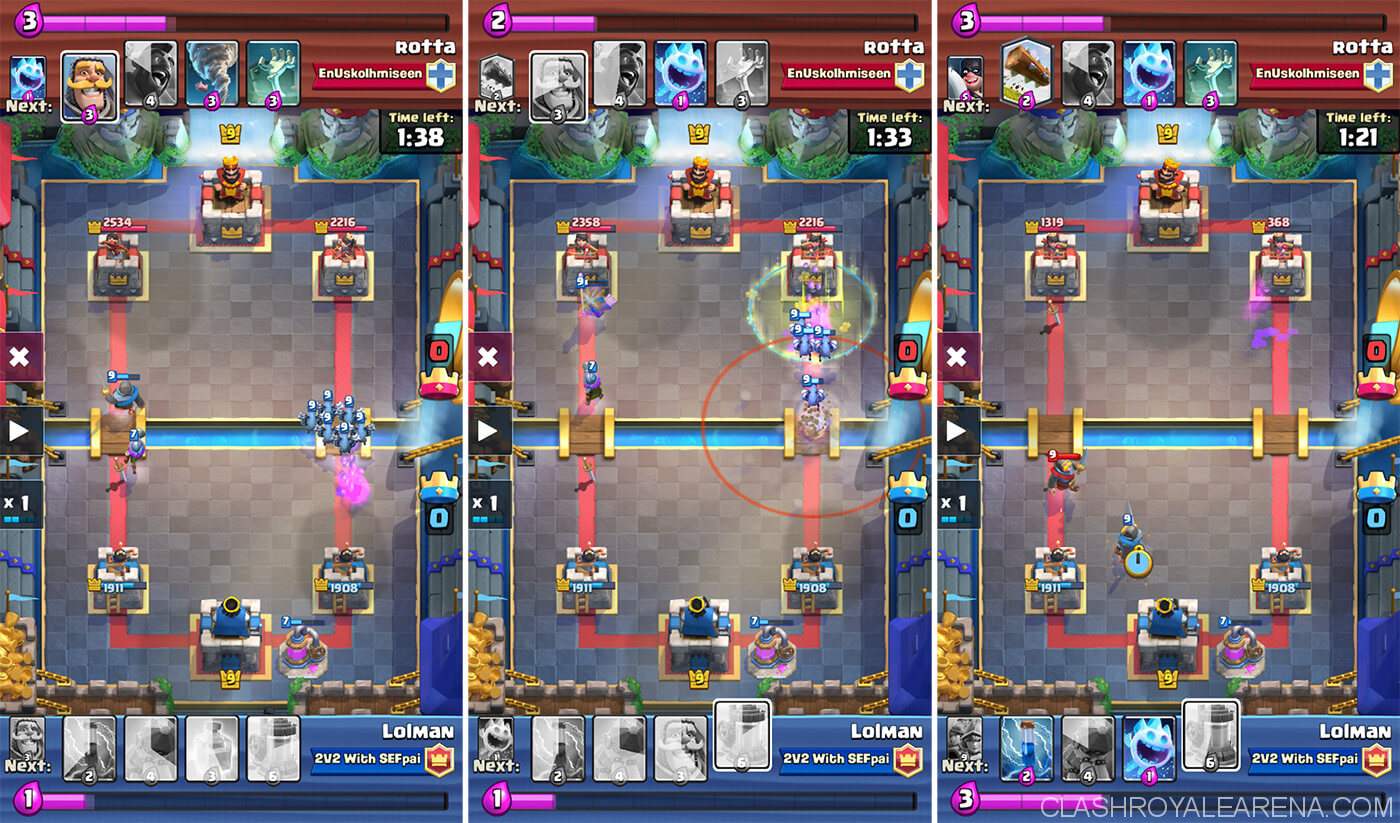 Here I was in a small pinch. He got a good Lighting on my 2 Musketeers and his Exe was on its way. I ended up letting him lock on. Knowing his only counters were Tornado, Exe, and Ice Spirit in a way. Also I had a Musket on other lane. He’d want to answer both. So I played Minion Horde behind Exe then seeing as he used the Tornado to counter it I healed my Minions. They did A LOT OF damage to the Tower. This turned out to be the game changing move which let me win vs him because he hard countered me with this match-up.

So around here you will want to continue pumping up after successfully defending a push and keep up pressure with Ram and all. Force your opponent to make negative Elixir trades. Use 3 Musketeers mainly for defense. Counterpush with them if they are alive.

Around now you will want to utilize your Pumps and the surge of Elixir to use 3 Musketeers.

Split Musketeers in front of your King’s Tower if your opponent doesn’t have Lightning. If they do, then split them at the back.

You will have some time to get a Battle Ram on your Musketeers to tank for it. The window however is really small so make sure you don’t miss it.

Go all in. Assuming your opponent cannot counter you easily. Go on the 1 Musketeer lane with Horde+ Ram.

So here you will want to just keep cycling 3 Musketeers and putting tanks in front till your opponents defense cracked.

Okay so of course we gotta get to the important bits. How well does this do vs the current meta?

Now while bridge spam is strong… 3 Musket Heal is stronger. You WILL NEVER lose. Follow my guidelines above about when to place your Pump and be careful.

They tend to overcommit Elixir so you can Pump up after defending a push.

Feel free to use 3 Musketeers on the same lane. Giving up a Tower is fine too. While going for the trade. 1 -1, 3 Musketeers always have the advantage.

Poison gives you a free Heal. Well to be fair, you get paid 1 Elixir to Heal because you counter 4 Elixir with 3 and they still have to answer the 9 Elixir 3 Musketeers.

If your opponent has P.E.K.K.A, it can be a little harder but that being said, you can Ice Spirit and if she attacks the Ram then your Musketeers will melt the P.E.K.K.A down.

Vs this, DO NOT Pump up behind your king Tower. Pump up in the center.

Play Minion Horde at the back corner so the Poison can’t hit both Horde and Pump.

After you get Elixir flowing, defending Graveyard is VERY easy. In fact, after that first rush push, till you pump up again there won’t be any window for the opponent to rush you because they will have a hard time dealing with your Musketeers. Assuming they don’t have Giant Skeleton or P.E.K.K.A.

Lightnign is the card which can make your deck useless. It can be tricky but you can beat this.

Ideally you want to use defensive Musketeers to bait Lightning (without loosing your Tower) then Pump up, build Elixir advantage.

Now vs say Golem Lightning, a mistake I used to make is splitting my Musketeers. You want all 3 on one lane. Why? Because if they use Lightning at once you will have a Musketeer hitting the Golem, if you get a tank like the Knight? That’s 2 alive. If you have a Pump and get a Ram? That’s 3 Musketeers alive and you’ve successfully defended that push with ease and you will take their Tower.

So you want to Pump with your opponent and use 3 Musketeers on the same lane but be cautious and time your tanks right. Learning to count Elixir will come in handy when you attempt such things.

Not a huge deal. Minion Horde usually covers these pushes.

People tend to carry Zap so try to tank the Ice Spirit and do NOT place Horde over the Ice Golem, but over the Hog.

Knight and Ice Spirit can counter the Hog decently as well.

Give this deck a try! It’s been working really well for me. I’ve been getting consistent 12 wins with this deck. It’s really strong this meta.