Hello my friends, this is gonna be another best Clash Royale Arena 8 Decks Summary and Breakdown for players above 4000+ trophies. This summary was shared by The Rum Ham as he did before. 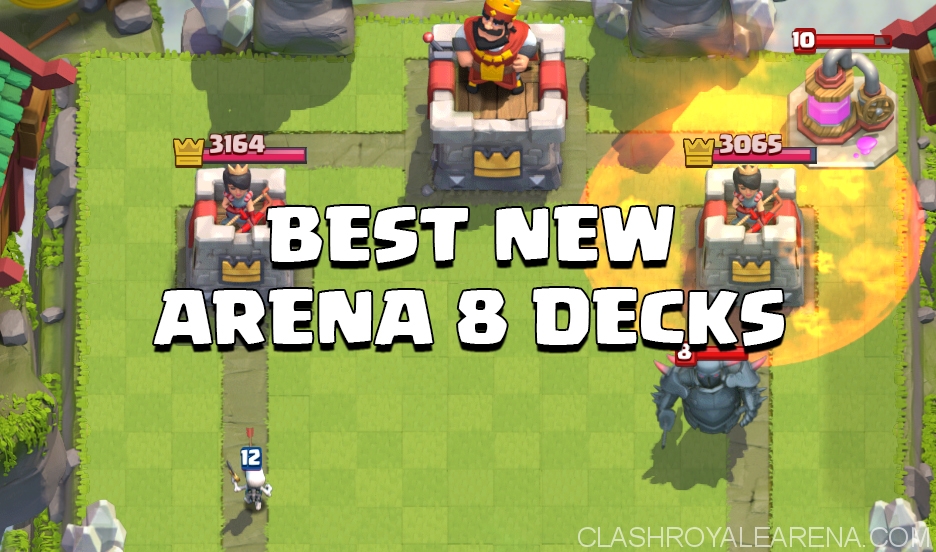 The Best Beatdown Deck of the Season: The Jason’s Deck

Our Jason didn’t have even a lose through the Helsinki Tournament a few weeks ago with his outstanding Beatdown deck utlizing Giant. Giant soaking damage for Hog Rider and Spear Goblins gave him an unstable wave which pushed him to some 3 Crown victories. This deck uses Giant as a small pusher or a meat shield for Archers and Spear Goblins to destroy everything. If the Tower gets locked on Giant, Hog Rider usually can deal 2000+ damage by himself. Ideally, when you have 2 Elixir Collectors at a time, you can easily launch a big 15+ Elixir push which rolls over your opponent’s Tower.

I posted an in-depth guide for this deck a few days ago, you can read it at here for more details!

The Best Control Deck of the Season: Poison Deck

Poison was pretty popular in Helsinki Tournament. It’s very easy to get positive value out of it and combined with the other cards to counter any threat on the ground. Hands down, there is no counter for the Poison so far. You can easily learn their deck, play defensively and turn into an excellent counter push with your Poison in the mid game. On counter push, Poison can easily generate excellent tempo and an Elixir Advantage. You should always win If this happens.

This kind of decks is definitely the most brutally defensive decks I have ever played. I did play a few battles with it at 3500+ trophies and won 1-0 most of the time. The Poison blocks any big push at the bridge and your other cards can handle any other small-medium push!

The best Siege Deck of the Season: Rocket Deck

Trust me, this deck can really frustrate people and get them to the Angry mode. Bomb Tower is definitely the best defensive buildings in this update. With 60 second lifespan, it helps you defend a few pushes and still stands tall. You always can Rocket and Fireball troops placed behind Towers, this prevents opponents from investing troops into massive pushes. Bomb Tower + Tesla in the middle is a real brick house which resists most pushes. Just play defensively for the 1-2 first minutes until you get your Collectors and Bomb Tower up and you can keep firing Rocket and Fireball!

Okay guys, I hope you enjoyed reading this and have found a new deck! Hope you can get a lot of trophies with these decks! Also, don’t hesitate to comment If you need any help. I am always here to help you xD.