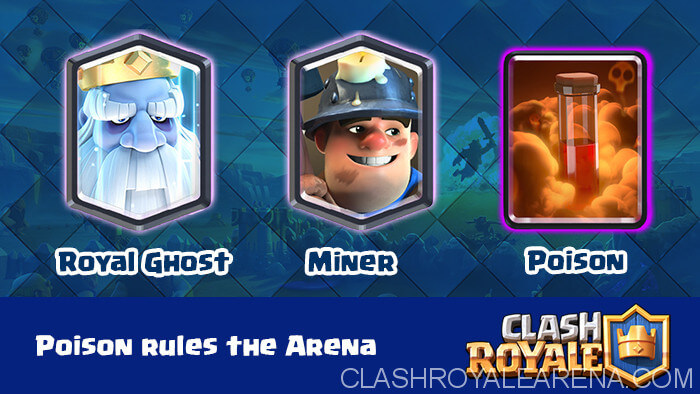 Someone said ‘Poison rules the Arena’. I found that it’s true.
With the balance change recently and the release of Royal Ghost, Miner and Poison are stronger than ever.

Miner: It’s not a Miner deck without a Miner.
It’s an excellent win-condition in this meta. By changing the placement and predictions you can consistently deal damage to your opponents’ towers.
It’s cheap, but you should know that Miner isn’t Hog Rider. Overcommitting can cost you the game.

Poison: Like the name of the deck, Poison is an impor Miner tant part of this deck.

And like I said above, Poison rules the Arena.
It helps you so much against swarms, glass cannons, pump, and X-bow.
You ideally want to damage the tower as well, because that guaranteed 216 damage on the tower. But sometimes, don’t be afraid to poison a push if you know it will give you value.

Skeleton Barrel: Isn’t it strange?
Skeleton Barrel, after balance change, is usable. In this deck, it’s almost a graveyard coming to your opponent’s tower.
If they don’t expect it, it will deal a lot of damage, that’s it.

Zap:
Maybe you would wonder, why not The Log?
The Log deal chip damage, clear the distracting swarms, shut down Log Bait, etc.
But I used Skeleton Barrel in this deck, which has the death damage synergize very well with Zap.
Also, Zap is more F2P friendly.

Royal Ghost: This new dirty old man is OP!
Like everyone said, it outshined the Bandit: invisible, high HP, splash damage, nice DPS.
Overall, this card is strong on both offense and defense.

Skeleton: It’s a cycle card, and it helps a lot against Graveyard, PEKKA, Hog, Miner, Mega Knight, etc.
You have enough stun already, so it’s a better option than Ice Spirit.

Electro Wizard: Finally, it’s a defensive card.
It’s the best card in the whole game now.
You ideally want the Miner to tank for him in the counterpushes.

Inferno Dragon / Inferno Tower: It’s not important what you choose, but I prefer the ID with its ability to go against Lightning, Royal GG, and its counterpush potential.
Versus the Beatdown decks, this card is the MVP (or MVC), so use it carefully

Miner Poison decks should be played defensively, and this deck is not an exception.

But you can be aggressive because the new cards made it more offensive than any other Miner Poison decks.

Early game (3:00 – 2:00)
Chip down their tower, but don’t overcommit.
You have a very strong defense, against any match-up.
Like any other deck, you have to figure out your opponent’s counters to your deck.
It’s almost cancer, like the Legendary Bridge Spam: the Strong offense which isn’t easy to stop, the strong defense which is hard to break through, but of course only if you don’t do anything stupid.

Mid-game (2:00 – 1:00)
Be more aggressive.
You should have a look at your opponent’s deck.
Defend every push right, and it should be OK.
If you feel like “Nah, I can’t break through it”, it rarely happens, but if so, sit back and turtle up.

Late game (1:00 – overtime)
Chip down consistently.
If they go all-in, defend carefully, and continuously deal pressure with the miner.

I’m kinda lazy with this part, so I will only talk about the hardest matchups

X-bow:
Against this deck, everything I can say is it’s hard.
Electro Wizard, Zap and Skeleton Barrel are your best friend. If not, say gg.
Defensive Poison can help lots, but overall you’ll get loads of damage.

Splashyard:
It’s not that hard like X-bow.
What you have to do is save Poison for the Graveyard, and defend the tank wisely.
If you have used Poison on somewhat else, then Zap, Electro Wizard, RG, Skeleton are OK, but be aware of the tank.

That’s all folk guys. Hope you enjoy this deck.