What is up guys, Corrosive Logic here, with some killer decks!

Since the release of the card, up until the very present moment, Graveyard has been the most consistent deck archetype, having been present in all the Metas. Graveyard is so versatile as it can be used in conjunction with so many different tanks/sub win conditions (e.g. Hog Rider, Giant, Knight, Golem, P.E.K.K.A etc.). 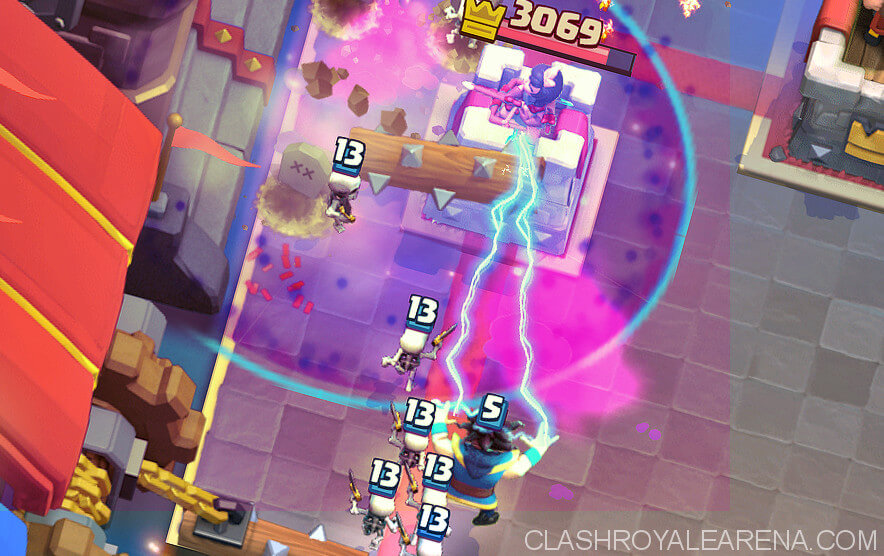 Graveyard has to be one of my favorite deck archetypes of all time, so today I’m going to give you guys my list of the current top 5 Graveyard decks in the current meta. Decks selected for this list will be based on success in Grand Challenges (multiple 12 wins) and tournaments such as CCGS. Also I tried to have different styles of Graveyard deck included i.e. different sub win conditions.

Note: Poison is the most powerful complementary spell to Graveyard at the moment, Freeze and Fireball may be better in certain situations but they are generally not as good. I also made a video on the 5 decks I am showcasing, which will be linked below. In the video I played a few games with Fireball instead of Poison, so you guys might have an idea of how it’s like.

So enough of the chit-chat, let’s get down to my list of the best Graveyard decks in the current meta!

How can this list be complete without a Giant Graveyard deck?

Giant Graveyard combo at the bridge, still remains to be the most powerful 10 Elixir combo in the game in my humble opinion.

This deck is played in a slow-roll fashion from the back, with strong support units such as the Mega Minion and Electro Wizard.

The reason this deck is only at #5 is because I don’t think Giant Graveyard is extremely popular in the current meta.

This deck was made by SaintBelikin, top ladder and tournament player.

The deck contains fast cycle cards, with strong defense utilities, such as Skeletons, Ice Wizard and Guards. Similarly to the Musketeer in 2.6 Hog cycle, the Electro Wizard in this deck must be used in a fashion which will accrue as much value as possible.

General gameplan with this deck includes pumping up initially, then throwing out as many Graveyard Poison pushes as you can when you have an Elixir advantage.

This heavy deck is played in a slow roll fashion. This deck shines against tanks, as after the P.E.K.K.A shuts down the enemy tank, it continues counter pushing for a massive Graveyard push! This P.E.K.K.A Graveyard deck was initially made during the 3 Musketeer meta, hence the Fireball Tornado combo. This deck is not very popular but I have seen it gets 12 wins in grand challenges multiple times.

The Splashyard meta is long gone, but there’s a reason this deck is still so powerful. This deck is probably my favorite deck out of all of these Graveyard decks on this list.

The deck is so powerful due to the Tornado combination with splash cards such as Bowler, Poison, and Baby Dragon. Patience is key with this deck, you don’t want to use Graveyard too many times, but instead wait for the right opportunities.

Since the decrease of the skeleton count to 3 instead of 4, I believe that Goblins are the better option in this deck, hence the name “Splashyard 2.0”, due to this little replacement. However if you are that person after that fast cycle, by all means use Skeletons as it is much more beneficial for cheap cycling.

This deck was once popular in the Graveyard cycle meta, but it was re-popularised by the CCGS tournament lately.

After seeing top players such as CmcHugh have success with this deck, this Graveyard cycle deck has become very common, for obvious reasons.

Tombstone is used a lot in the current meta to counter bridge spam, along with Ice Spirit and Log.

This deck has both the solid defensive capabilities of a control deck, and the offensive threat of fast cycle decks.

The deck is very straightforward to play, you have defensive support cards such as Mega Minion and Archers, and your main offensive push is going to be Knight/Graveyard/Poison.

This is my list of the top 5 Graveyard decks right now. It is simply my personal opinion so please don’t get offended if you disagree.

I hope you liked this list and enjoyed the read! If you have opinions you would like to share, by all means start a discussion in the comments below! Also don’t forget to check out the video I made on these decks!

Til next time guys!