Hello guys, today I am going to show you one of the best Furnace Decks I have ever seen in Clash Royale. This deck is definitely not a meta killer but it is doing a great job at Arena 8 during the test. If you are sick to death of playing Royal Giant or Hog Rider, give this deck a try to make the game more fun! 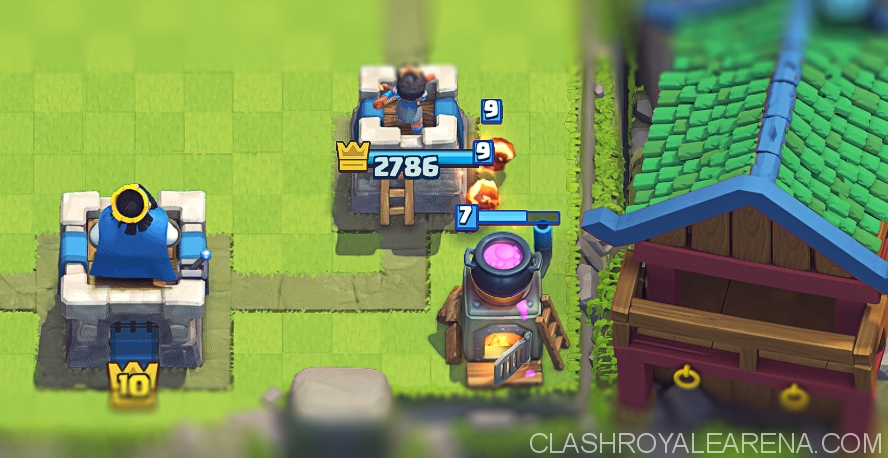 Furnace costs only 4 Elixir and can last a pretty long time, 50 seconds. It has decent HP and spawn 2 suicide Fire Spirits every 10 seconds. You will want to upgrade this card to high level, otherwise the second Fire Spirit can’t reach the opponent’s Tower. I usually place it first If I have it in my starting hands.

Goblin Hut is the second troop spawner card that makes this one a swarm deck. Place it down first If you don’t have the Furnace in your starting hands. Towards end of the battle, place your Huts down right in front of your Towers to deal with pushes and to protect your Towers.

Mirror is definitely the MVP of this deck. I used Barbarian Hut instead of this before but 7 Elixir is just too much in my opinion and it also doesn’t aid the effort in swarming a Ice Wizard defense. I use Mirror to build extra buildings most of the time, even before the x2 Elixir time. By using Mirror and focus on just one lane, you can easily force your opponent to play defensively. But, yea, don’t over-commit and do know when you need to play defensively.

Barbarians are the meat shield of this deck. They will help you deal with Royal Giant, Hog Rider, P.E.K.K.A,… Don’t ever use Barbarians on offense because they are just extremely slow and can be easily removed by splash damaging units. You can replace them with Mini P.E.K.K.A, a super versatile card. It’s up to you!

Goblins and Spear Goblins are damn cheap to lure and kill lots of units. They also help your swarms push. You can put them in any deck, undoubtedly.

Arrows: If you are at Arena 7 or above, you will find it extremely frustrating while dealing with Princess. If you have Miner, I strongly recommend replacing Arrows with that guy. He is extremely useful in lots of situations, especially at helping you deal with Princess and Ice Wizard.

Fire Spirits: This is just a super useful card. They can easily deal with Barbarians, Minion Horde,… Read more about them at here. Instead, you can try to use Zap.

The primary reason Hut Deck is not really good competitively is because of how prevalent splash damage is, especially Princess and Ice Wizard. A Princess can shut down your entire lane, so you will want to kill her immediately with Arrows/Miner. She can counter most troops in this deck.

Okay so that’s everything I want to share about this Furnace Deck so far. Don’t hesitate to comment If you need any help guys!