Sorry for the title guys. Now I have your attention.

Now maybe you have noticed that the same deck was posted a few hours ago. Yes. But I just can’t ignore this stunning write-up by Unstoppable. Also, in this article, he will be showing us so many great tips for Challenges, which weren’t shared before. So, hope you don’t mind guys! 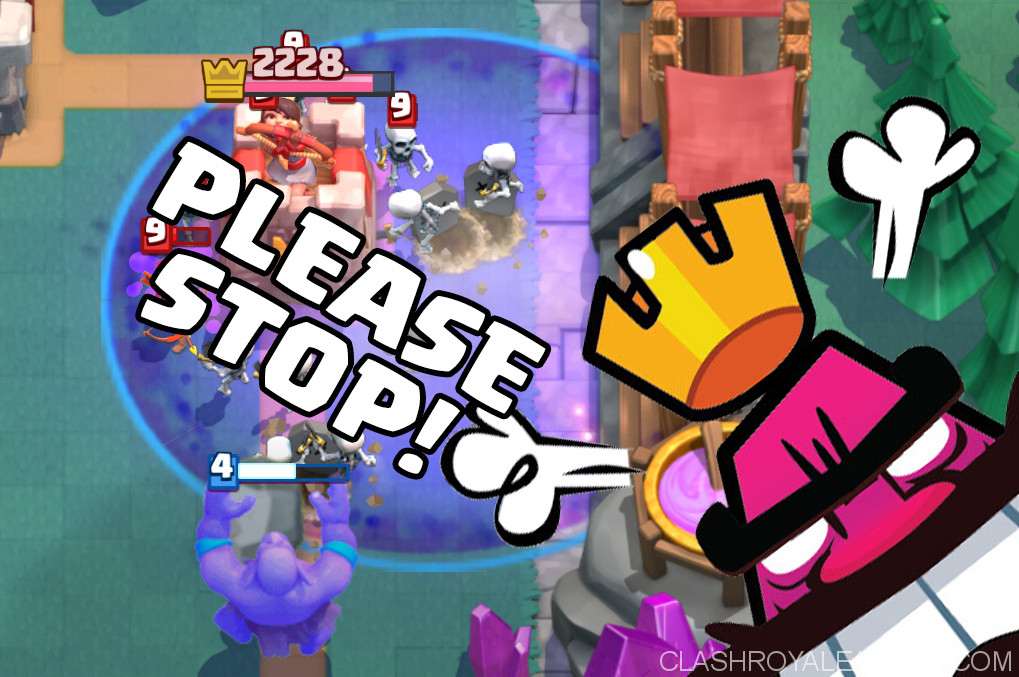 What is The Best Challenge Deck Right Now?

Its Unstoppable and today I want to share with you guys the new deck that has been popularizing the challenges due to The Log bait and Lavaloon meta: Splash Nado Graveyard! So far I’ve done 2 challenges with it, the first ending up with 10 wins, but then from there on my streak went crazy! I got three 12 wins in a row, (the first was 12-0) then an 8 Win, then an 11 win! I faced players from Mastery.gg, Lively Colors, Phonecats, and Nova NA and won against all of them.

I will first attempt to explain why this deck is so good inside of Challenges.

You must be very careful however as there is NO Log in this deck. But Graveyard + Poison has always been extremely strong against Log bait, so you should have no trouble against Hog Rider. Lavaloon is even easier.

Tornado is so good against Balloon, and when you pair a Baby Dragon to splash Mega Minions, Minions, and all the Lavahound support troops with a Tornado, their whole push is basically taken down.

Miner Poison Control is strong, the question is who will chip the opponent down faster. Your Graveyard Poison, or their Miner Poison. I’ll talk about individual matchups later on.

And finally, Knight Graveyard. This deck has a good advantage against Knight Graveyard because Knight, Bowler, and Baby Dragon are not weak to Poison, while your opponent troops are.

Also, Bowler and Baby Dragon are great counters to Furnace, which is often in knightyard decks. Golem is less frequent, and the way to counter it is pretty much the same concept against Lavaloon.

So rundown of the deck:

Knight: Tier S card. Used in 60% of decks in challenges due to its high DPS as well as high health. A few months ago it was almost never used, but since it can counter so many troops, it is used a lot now. This is your primary Mini tank for your Graveyard.

Bowler: The main reason why this card is such a beast right now is Hog Log bait. Around 30% of matches are infested with Hog Log bait. Also, its not weak to Lightning or Poison, which is commonly found in Graveyard, Golem, and Lavahound decks. Tanky, High Damage, Splash, plays a great role in this deck!

Tornado: Personally along with the Electro Wizard my FAVORITE card in the game. I love using it to activate king Tower, or place opponent troops into a cascade of splash from my Bowler or Baby Dragon. One of the best and most underated cards in the game. At first when I saw pros use it I thought “It takes too much skill to use, I’ll never be able to use it.” But it just took a little bit of practice, and now its my best defense against a Hog rush in the beginning of the game, or a simple Miner activation onto the king Tower.

Poison: Another A Tier card inside of challenges. With so many Log bait around, if your opponent does not have a Knight, they have literally nothing to stop your Poison + Graveyard combo, enabling you to get 1000’s of damage on their Tower. It’s much better than Fireball as you are able to protect your Graveyard for much longer than if you instantaneously killed your opponent’s counter. Since the best counter to Graveyard is Minions and Archers, Poison is a must have in this deck.

Baby Dragon: A few months ago this card was trash. After TMD Yao Yao used it to win the Crown Duel in his Golem deck, it has come more and more into the meta for its reliable splash, high HP, and its invulnerability to Lightning and Poison. It is a really strong defense against Lavaloon as it can’t be lightninged, and along with Tornado is really strong in destroying the Lavahound, Balloon, Mega Minion, and Minions all at the same time. Its a great secondary tank for Graveyard as well.

Graveyard: The win condition of the deck, obviously. You always want to place Graveyard so it doesn’t activate the king Tower, check this guide out for more details! Never rush your opponent with Graveyard. I definitely use it early in the match, but only if I can get the Knight+Graveyard+Poison combo altogether. Graveyard is pretty much useless if your opponent has three Minions or Archers, so you want to make sure you have Poison ready.

Skeletons: Probably the best card in the game right now. I see it in 95% of Grand Challenge decks except spell bait (who prefer skarmy). They are great distractions (Can counter Minion Horde if you split them in the center), or even pair them with your Graveyard for 4 extra Skeletons! Surround a Bowler or Sparky for a massive Elixir advantage and offer incredible damage output on defense as well. If placed reactively and opponent does not Zap, they will only allow a Hog to get 1 hammer onto the Tower.

In the beginning, I almost always wait to see if opponent drops a pump. This is due to the fact that if I place a Knight to the back, the opponent might drop a pump on the other side, and I won’t be able to attack it.

If your opponent does nothing, it’s a good idea to assume he does not have Pump in his starting hand and you can stop leaking Elixir and place your Knight or Bowler at the back.

Normally you can easily predict your opponent’s deck from the first few cards he plays.

For instance, Princess almost always signifies Log bait. Hog Rider is normally only used with Hog Log bait. Bowler is very likely in a Graveyard deck. Knight is used in almost all decks, so thats a no-go. Tombstone is almost always paired with Lavahound, etc etc.

Experience will help you predict your opponent better. Now if you know your opponent is using for instance Log bait, always save either Tornado or Bowler for the Goblin Barrel.

Basically just know what to use and what to save.

Normally Lavahound only has two Graveyard counters: Minions and Goblin Gang/Skarmy. Thus, remember to save your Poison to go with your Graveyard Knight combo.

Against Golem decks, always rush the lane with the pump regardless of how much damage you’ve done on the other side. If your opponent drops a Golem, rush the opposite lane with a huge Graveyard push, ignoring the Golem completely. Your opponent will have to spend a TON of Elixir to counter your push, allowing you to Tornado the Golem into your king Tower and then drop one Elixir Skeletons to kill it faster.

Same concept applies to all big tanks like Giant and Lavahound. Tornado is so valuable on defense when paired with Bowler and Baby Dragon, as all support troops are able to be splashed, both air and ground. Basically you want to keep chipping your opponent towers with Graveyard Poisons, while defending with Bowler Baby Dragon Tornado. Lightning wont affect Bowler or Baby Dragon much on defense.

Individual Matchups (The absolute most popular decks in Grand Challenges):

Lavahound: Drop knightyard at opposite lane, along with Poison prediction. Your opponent almost always has Goblin Gang, three Minions, or skarmy to counter which will be decimated by Poison. Then Baby Dragon + Tornado on defense to clean up the Balloon and Lavahound easily.

Golem Pump: If pump is in the middle, use Poison on it. If pump is behind a crown Tower, this is awesome for you. Knight yard the pump side, then Poison as Golem is often paired with three Minions. Then on defense, Tornado the 8 Elixir Golem into your king Tower, while using one Elixir Skeletons to kill it faster.

Hog Log Bait: Save your Bowler for the Goblin Barrel and Tornado for the Hog Rider. On the first Hog Rider push, Tornado Hog into your king Tower. Coltonw83, a pro, explains how to use Tornado here.

Or you can Tornado Goblin Barrel into your king Tower. After your king is activated, Tornado the Hog into the death zone where all three towers can target it. It wont even get a hit on your Tower. Whenever you are ready, combo knightyard with Poison and it is unstoppable.

Three Muskies: One of my personal favorites to deal with. Whenever you see the three Musketeers, Tornado them together into one lane, then Poison. Or drop your Bowler on the side with two Musketeers. Sometimes you probably shouldnt Poison their pump in this scenario, so you can have Poison for the three muskies.

Knight yard: Most knightyarders use the Furnace Graveyard Knight Poison variant. This deck is stronger as none of the troops other than ewiz are weak to Poison. However, if they try to get their Knight yard push going, always drop one Elixir Skeletons at the bridge to prevent your opponent’s Mini tank from aggroing your Tower. Now your Tower will help your Baby Dragon or Bowler or Knight to clean up Skeletons from the Graveyard.

I hope you liked this guide, if you want to watch me use it live in Grand Challenges which I am very active in doing, add me on Facebook.

I also have some cool chest openings and pictures I posted on it!