Hey my friends, Do you want to see to the hot new Arena 8 Decks in the third Clash Royale season? Today I am going to give you the new quick writeup from The Rum Ham. Hope you will enjoy these decks! 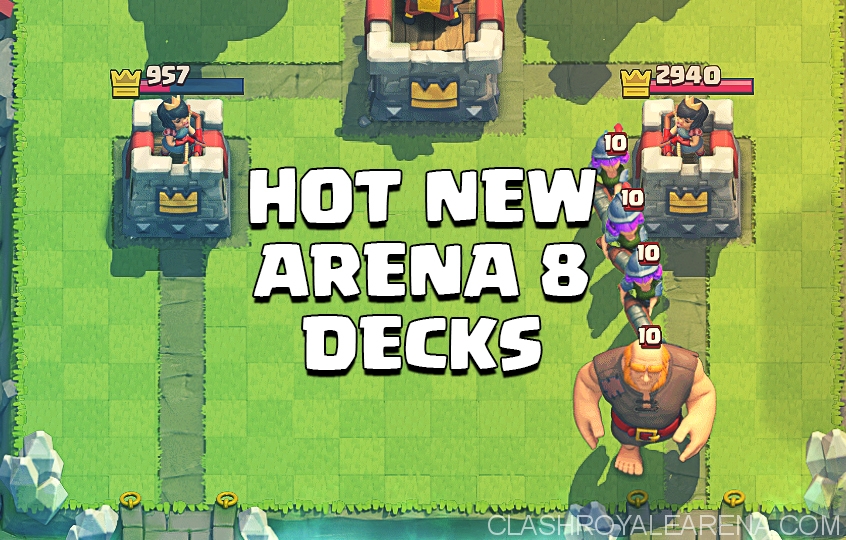 This is a linear Beatdown Deck which can break you over 1 test – your ability to counter swarms. This Arena 8 Beatdown deck may not seem threatening If you are using more than 3 AoE Spells or Troops. You will usually need Arrows to deal with any combo of this deck. If you are not prepared, you will feel helpless or maybe will quit the game after losing 1 Tower.

The ideal strategy of this deck is to play a Giant Skeleton behind the King’s Tower to invest Elixir for later. Once the Giant Skeleton crosses the bridge, send your great Arrows test! Use your Spear Goblins behind him and drop your Goblin Barrel onto the Tower. Your opponent is facing 2 terrible simultaneous challenges:

If your opponent plays Arrows, just mass-send your Minion Horde, Skeleton Army, Minions, Goblins,… or whatever you have.

This deck seems pretty flexible! In addition, I don’t think Freeze is great for this deck.

Three Musketeers has been being used a lot since the last update! Most control decks try to commit 2-3 cards to the win condition. But what about just 1 card? The Three Musketeers Deck emerged as an efficient deck that dedicates lots of slots to cheap efficient cards. While using this deck, although you can use Three Musketeers to deal with tankers, but most of the time, you want to play them behind your King’s Tower in order to split them up. With 1-2 Musketeer on each lane. With the Elixir Collector refilling your Elixir, you can easily control both sides and support the more advantageous side whenever you want. Along with the help of your defensive building and Elixir Collector, you can deal with any Golem push. This deck requires an immediate response and doesn’t cost much time to devastate a Tower.

What about Mortar decks? Mortar decks are very popular in this meta game but Balloon deck (another popular deck) can easily counter them. That allows Spawner Decks to thrive without having Mortars and Rockets.

The hardest part of this deck is putting the Barbarian Hut down without losing the Tower on the other side. Dual Prince decks can easily counter this deck so you will don’t want to give them an opening. You will want to place solid defenses down and a good selection of efficient troops on your hands before dropping Huts.

You will also need direct damage spells in order to deal with any ranged unit, which can kill your 2 Barbarians quickly (Musketeer, Witch, Wizard, Ice Wizard, Princess,…). Fireball is a great card for this deck, which is a catch-all to most of those problems. To read more about using Fireball effectively, please take a look at here!

Valkyrie is definitely one of the best filter cards right now. She works extremely well in most decks, has 360 degrees splash damage and a decent amount of HP. Valkyrie + Freeze is my favorite combo which answer almost every situation!

Rocket is a card that can be built entirely around. Decks which have more than 2 defensive buildings can use Rocket + Fireball combo to grind up.

Okay guys thank you very much for reading this. Also, a big thanks to The Rum Ham for this great summary! I hope you can will find these Arena 8 decks helpful. You rock!