The Royal Giant is widely considered one of the most powerful cards within Clash Royale and as such, many medium to high level decks are focused around it. You’ll rarely find a day on the forums or Reddit where there isn’t at least one thread complaining that the Royal Giant is over powered. The reason for this is fairly simple. At both ends of the game, the Royale Giant isn’t that good. That is to say – a low leveled Royal Giant is fairly useless and an Royal Giant at max level arena is also fairly useless. But for everything in between, it’s extremely powerful. Players tend to try and over-level there Royal Giants because of the huge advantage it gives you and so playing from 2500 to 5000 trophies, you’ll find decks littered with the Royal Giant. 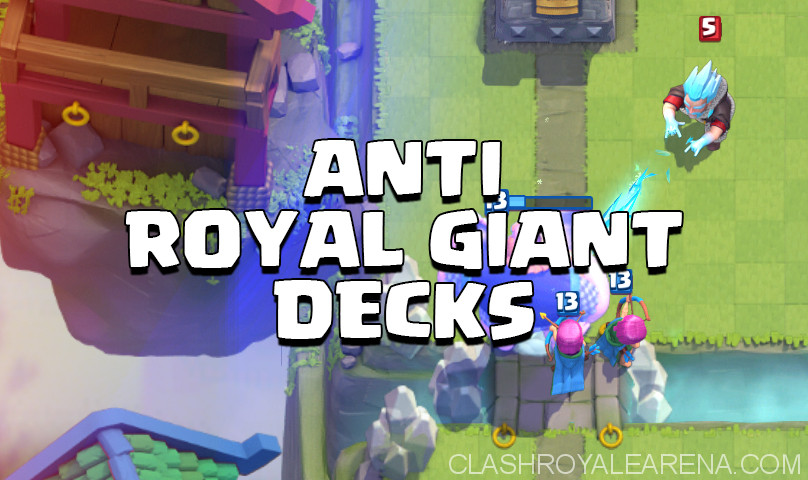 Hey guys it’s Ash and in this post I’m going to show you guys three great decks at countering the Royal Giant in the current meta game.

One of the biggest problems a lot of players have in the game is beating players who use high level Royal Giants. Since Royal Giant is a Common card, it’s pretty easy to level him up quickly, and so this makes it tough for the average player to deal with them when most of your Rare and Epic cards are underleveled in comparison to your opponent’s Royal Giant. So I’m going to share three decks that can easily shut down any Royal Giant player.

The first deck is this Hog Rider + Goblin Barrel bait deck with super good defense against Royal Giant and other tanks.

Simply trying to defend against a Royal Giant won’t win you the battle, you need cards that can effectively counter the Royal Giant and then allow you to make a powerful counterpush.

The last deck is this Giant beatdown deck. Most top players would use the Executioner instead of Ice Wizard, but the Executioner really isn’t going to help you much against a Royal Giant. Executioner is also getting a big nerf soon. However, the Ice Wizard is much cheaper at 3 Elixir and can significantly slow down the already slow Royal Giant, allowing your Prince, Mega Minion, and even Skeletons from your Tombstone to quickly kill the Royal Giant.

What are you waiting for? Let’s give these new meta decks a try!