Hey Guys! It’s lightningmaster823 here and today I will show you the easiest ways to create your own Beatdown deck! 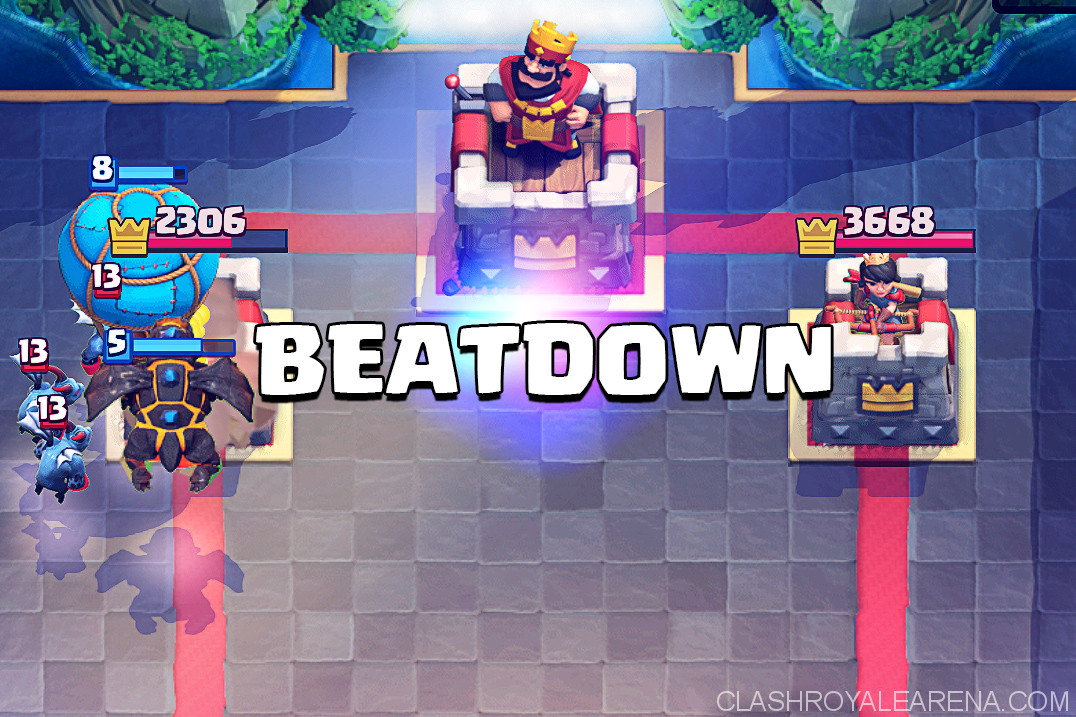 In my opinion, there are 5 different archetypes in Clash Royale:

To read more about Deck Archetypes, please take a look at here.

Why Beatdown is Good:

Obviously, beatdown has you packing a crap ton of troops on the field at a time, it absolutely wrecks siege decks as since you can easily put your tank to soak up the damage from the building. Beatdown also forces your opponent to immediately react as since most pushes can’t be ignored. Support units can wreck certain counters.

Why Beatdown is Bad:

Control Decks, especially Cycle Decks and Spell-Bait Decks, often wreck Beatdown, as since all 3 of those archetypes allows you to pressure the opposite lane to force the beatdown user to spend elixir on defense, or take heavy tower damage. Also beware about beatdown users’ worst nightmare: INFERNO TOWER!!!

How to Play Beatdown Decks:

As an experienced beatdown user myself, I tend to do this:

I would start with your tank in the back, if not in your hand, try using emotes to get your opponent to make his/her first move (I sometimes do that), if they rush the other lane, then don’t play the tank until double elixir time unless you are confident that you can defend the other side.

Keep playing defense, try to sneak in a few attacks if you can, but if you can’t or that you’re not confident, then don’t risk it as doing so may cost the game.

This is the time where many beatdown decks (especially heavy beatdown) come into play, apply pressure to your opponent by placing your tank in the back, if your opponent rushes the other lane, then defend as best as you can. Keep trying to place support units as you go; soon your opponent will be basically destroyed if they don’t react fast enough.

Keep pressuring your opponent by using your tank; try to spell cycle while you’re at it. Everything else is basically the same as Double Elixir Time

Good Tanks to use in Beatdown Decks:

Giant: Despite being my least favorite card, he is decent at 5 elixir, so if you’re new to this, you may want to use  Giant as it’s easy to create a push (don’t use it if its extravagantly underleveled), at tournament standards, he has 3344 HP, that’s quite a bit for 5 elixir. You can also use him to stall opponents during the last 20 or so seconds of the match.

Giant Skeleton: Although he isn’t meta, he’s beefy as well, having a bomb that does almost 1000 damage makes him good on both offense and defense, he can also do better on defense as since he actually attacks the troops, and his bomb will kill most of them. If you get him extravagantly close to the tower, your opponent will suffer heavy damage from the bomb.

P.E.K.K.A: Good tank, plenty of damage, 7 elixir, She’s good on both offense and defense as well, with that 1 second deploy time makes her extremely viable on defense, also allows counterpushes. Only downside is that you won’t get as much elixir as you would if she still had that 3 second deploy time

Lava Hound: Fits into Beatdown, in the Aerial Assault category (which is a sub-archetype for beatdown), however, it’s a good tank for air troops (Balloon, Mega Minion, Inferno Dragon, or even Battle Ram).

Golem: The ultimate king of Beatdown Decks in my opinion, despite having a very expensive cost at 8 elixir, he has about 4200 HP at tournament standards, does more than 200 damage per hit, and calls for immediate response. If you’re new to using beatdown, I would suggest Golem as it has really good HP, even at level 1. Yet being 8 elixir, you can run Elixir Collector to gain elixir

Spells to use in Beatdown Decks:

I would strongly suggest using 2 damaging spells in beatdown decks, one heavy, one light.

The Two Types of Beatdown Decks:

How to Build a Light Beatdown Deck:

Light Beatdown Decks tend to have cheaper troops, but still pack a punch!

**Support Units are used as either an offensive unit or a defensive unit.

Example of a Light Beatdown Deck:

How to Build a Heavy Beatdown Deck

Heavy Beatdown Decks pack a bigger punch, but are more risky to play.

****Elixir Collector must be used in a heavy beatdown deck, especially if the average cost is 4.5 or higher.

Example of a Heavy Beatdown Deck:

Other Examples of Beatdown Decks

(I’d like to give Lolman a big thanks for helping me out on this part of the guide!)

Our other “ultimate guides” on buildings decks:

Hope you enjoy this guide! Please comment if you are concerned with anything.

And hope that this will help you when using beatdown!!! 🙂